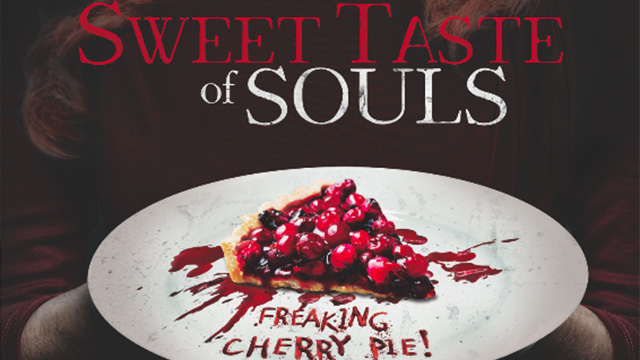 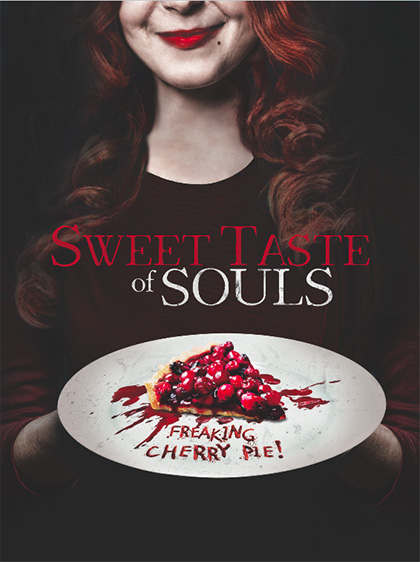 An aspiring quartet of rock musicians traveling through a sleepy town stop off at a country-esque diner and pie shop, they run afoul of its mentally unstable owner. At the mercy of her mercurial moods, they find themselves potentially trapped for all eternity.

Sweet Taste of Souls is the second feature from director Terry Ross and the debut film from writer F. Scott Mudgett. While there are some exciting and original concepts at play and much to commend, it sadly doesn’t quite come together.

Our four musicians, the obnoxious Kyle (Mark Valeriano), snarky Wendy (Amber Gaston), sensitive, intellectual Nate (John Salandria), and damaged misfit Lily (Sarah J Bartholomew), squabble relentlessly amongst themselves en route to a gig. Needing a break from the road, they
find themselves in the small town of Angel Falls (pop.403) and, more consequentially, Elle’s Kountry Kitchen. Its proprietor, fiery-haired Ellinor (Honey Lauren), is famed through the town for her pies and, it seems, as the local middle-aged hottie.

As flaky as her pie crusts, she also fancies herself a master at artistic photo portraiture. Lining the shop walls, her work features strangely pedestrian models mismatched in various activities against stark white backgrounds. As our four soon discover, these are poor souls trapped by Ellinor in a sort of photographic limbo, frozen in poses when anyone from the real world enters, but otherwise left to contemplate their helpless state for years on end.

As we start the film, our musicians are a disparate bunch, verbally poking at each other to the point of tedium–in other words, every small rock band who never made it beyond some sad gigs at the Pancake Fest. The young cast here are natural, appealingly charismatic even when their characters might not be, and their banter is fast, witty, and well-written.

The problem arises as we begin to meet our more adult characters. The film wants to continue the arch, smart-assed dialogue, but it falls flat from the more mature mouths. Amateur sleuth Sid (Frank Papia) and buddy Barney engage in typically male chops-busting that is both awkward and even a bit amateurish. It’s hard to tell if this is the fault of the actors, the director, or perhaps that the younger cast may have had more opportunity to “workshop” their scenes.

Indeed, once the film shifts focus to Sid, who believes finding our missing musicians may lead him to his long-lost daughter, things take an odd turn in every respect, and the film seems both rushed and less carefully executed. And while the town may be sleepy, it seems, though almost the entire movie, positively deserted, allowing Sid and Barney to investigate the band’s abandoned vehicle and break into Elle’s without a sign of a single cop or even a lone roaming Boy Scout.

Another issue lies with the stark, photographic tableaus our fine younger actors are stuck in for most of the film. I understand the nature of their entrapment, but the choice to film them straight on, as if viewing the framed picture, limits the visual dynamics and stifles their blocking. It’s as if we’re watching a minimalist play, staged in a shoebox theater. Indeed, Sweet Taste of Souls could make a tremendous little theatrical play with its limited locales and characters. And that flat staging conceit would switch from a hindrance to a stylistic boon.

Honey Lauren does as much as she can with the character of Ellinor. It’s a tough role. Elle is batshit crazy, and when she’s not fuming at our band, she’s feverishly engaged in a bizarre inner/outer dialogue with an imaginary voice embodied in her stuffed parakeet (!).

This wild insanity eventually dooms Sweet Taste of Souls, as the film tosses aside the nice inner-logic it had constructed. Twists begin to come from out of nowhere, and we find ourselves in a completely different kind of film. If it had been able to smooth out that transition more logically, the ending could have been unique and terrifying.

That is the big problem with Sweet Taste of Souls: great concepts that never get the execution they deserve. I would love to see what this could have become if Ross and Mudgett had either the time or perhaps the inclination (whichever might be at fault here) to fully develop such solid ideas.