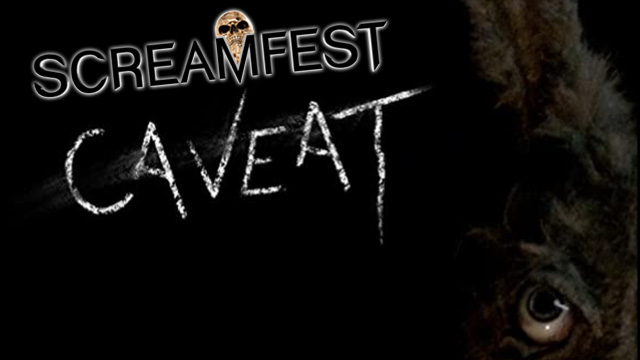 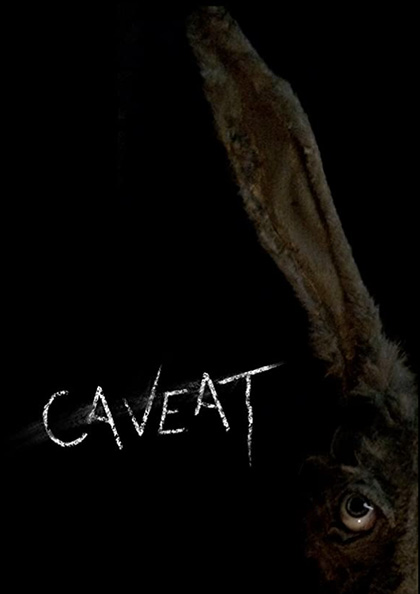 Unreliable Narrators can make for fascinating characters in film and fiction. They come in many varieties. The Deliberate, characters who seek to deceive intentionally. The Evasive, those who muddy the facts as a result of their own weaknesses and bias. And then the Naïve, who believe they speak to truth but simply aren't privy to it. But what if you have multiple examples in one film? Well, if you're in the hands of writer/director Damien Mc Carthy, you have Caveat, a haunting, darkly captivating, and cryptic debut feature.

Isaac (Jonathan French) is an already haunted-looking chap. Gaunt, bearded and hollow-eyed, he is a desperate soul obviously in need of the 200 pounds a night that Barret (Ben Caplan) offers him for what seems, at first, to be a simple task. Watch over Barret's niece Olga (Leila Sykes). To Barret's concern, Olga has determinably returned to her remote, isolated, and dilapidated childhood home. It is the home where her father killed himself. Her mother? Well, she has simply gone missing. Though wary, Isaac is desperate enough to accept, even when it is revealed that "isolated" means on a tiny island. And despite the fact that the one lone boat will return to shore with Barret. Despite Isaac's inability to swim. Despite the revelation that Olga is quite disturbed and spends much of her time in a catatonic near-paralysis, face in her hands

And then there are the rules.

Isaac is not to enter Olga's room. And to prevent this from even being possible, there's the final caveat to the job. Isaac must spend the entirety of his time in the house locked in a medieval-esque harness, chained to the basement floor. This leash allows him full movement throughout the home, except Olga's room. Its length terminates at her doorway. But even this, Isaac eventually agrees to accept as part of his task. And, strapped into this bizarre leather vest, Isaac begins his stay in the house. He develops a growing realization that Olga may not be the only troubled psyche in the cottage and that reality can be something very personal.

Mc Carthy has crafted a unique scenario that peels back ever-darkening layers like Olga's childhood home's old paint and wallpaper. He deftly creates mood and texture and makes excellent use of his small, fine cast. Mc Carthy's Caveat is intelligent, unpredictable, and creepy as hell. Mc Carthy proves exceedingly confident for a first-time director, and that assured approach pays off splendidly for the audience. I am reminded of another filmmaker and his first picture: Liam Gavin, director of A Dark Song. He makes effective use of a combination of extended stretches of near-quiet plus some truly unsettling imagery (a tatterdemalion toy bunny that's positively nightmare-inducing).

Jonathan French is standout as Isaac. His performance is hungry and dispirited, and his ability to carry much of the film without ever losing our sympathy interest is key to making things work. Leila Sykes gives Olga a quiet, believably broken quality. And Ben Caplan's Barret displays a desperate nature quite different from that of his acquaintance. Each plays an integral part in the story, especially as it unfolds repeatedly.

There have been many very impressive horror first-features this year. Caveat is easily one of the most interesting, and McCarthy is indeed a filmmaker to watch.

This devil of a reviewer gives Caveat 4 out of 5 imps.