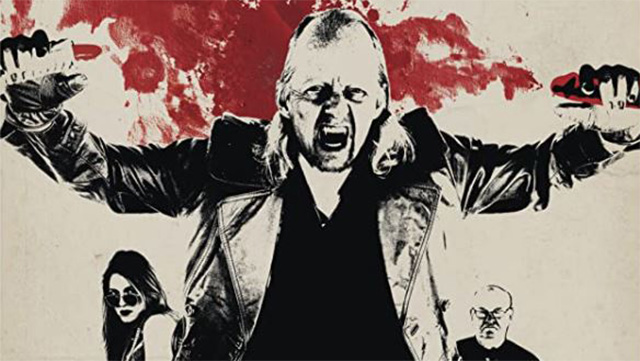 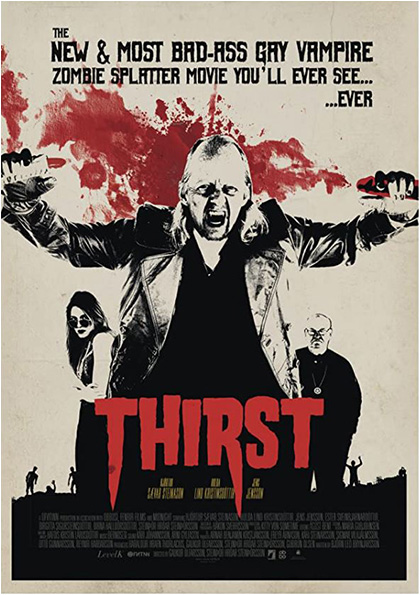 Hulda, a drug addict prostitute, over the suspicions of detective Jens, is released from police questioning following her brother's overdose death. Wandering the cold streets of Reykjavík, she comes upon two men beating up what she initially believes is a frail older man. This is Hjörtur, and Hjörtur is no typical old man, but actually a centuries-old vampire. Hulda intervenes, but centuries-old vampires can take care of themselves. After dispatching and dismembering (and I do mean dis-membering) his attackers, he befriends his would-be Samaritan. After all, Hjörtur's tastes don't ever run to… women.

That's the Icelandic word for "mental," as in "insane." Thirst (Þorsti) is geðveikur. Stark, raving geðveikur. Besides a gay vampire, druggie hooker, and an old, obsessed cop, throughout this batshit film, we're graced with a doom-spewing basement televangelist, pseudo-zombie resurrections, a Satanist/vampire cult hell-bent on bringing about? preventing?–we're never quite sure–Armageddon, and more severed male genitalia than a Robert Rodriguez film. At times we're watching a bittersweet tale of two outcasts or the playful goofiness of Polanski's Fearless Vampire Killers, and at others, we're watching a gore and blood-splattered Viking Tröma film.

And that's part of the problem with the craziness of Thirst. It has no idea what sort of movie it wants to be. The vampires seem to be ambiguous as to their modus operandi (do they drink blood, or do they eat flesh?) and their function in the story. Sometimes the spread of their infection is traditional, and at other times it is more zombie-like, and a simple bite anywhere is enough. Is evil the thing to be feared, or is it the thing that will save mankind? Contradictions arise within a single monologue. Thirst pushes and pulls in every direction, tossing everything into the mix at times, but in truth, ever enough of everything. If you're going to be geðveikur, BE REALLY geðveikur! All those ingredients, when relentlessly thrown at an audience, as the folks back over here at Team Troma have shown time and time again, can make for a grossly entertaining assault.

Hjörtur and Hulda are two genuinely forlorn characters, and their very well developed, given the rest of the film they're in. Hjörtur is sadly sweet–a weary old man in dilapidated finery helplessly entranced with young male beauty. Hulda is perhaps even sadder. They have each other for now, but, as she says, everyone she gets close to leaves. The fil would have better served the two if Thirst had decided which direction it wanted to go. They could have been part of a magnificently poignant vampire film, such as Let the Right One In, or hurtled along in a film of unrelentingly brain-dead insanity in the manner of Lloyd Kaufman.

Thirst is crazy and entertaining enough, but it needs to be so much more of the former. But it's enough of the latter to make sticking through the film worthwhile, if not imperative, viewing.