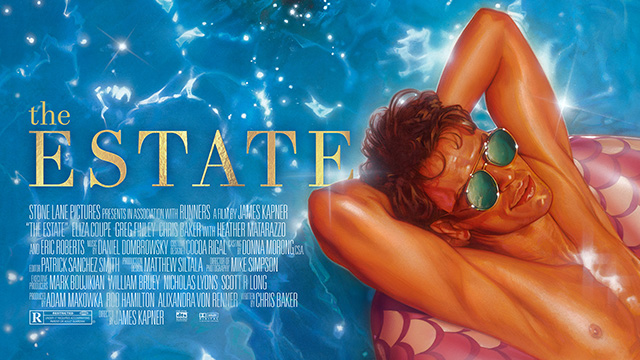 "The Estate"
review by Diablo Joe 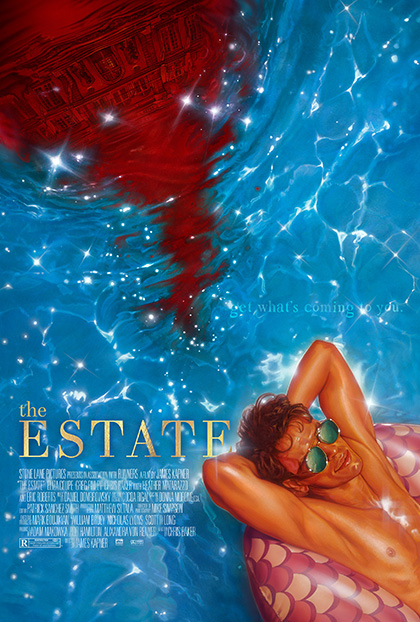 George and his mother-in-law Lux are the sorts of people who think they can just get away with murder simply because, as they remind us, they’re white, and they’re rich. The two share a lavish Los Angeles mansion, as well as an ever-increasing number of other qualities. They’re both beautiful, vapid, spoiled, aloof, and have the same taste in men. Most of all, they both loathe George’s father, Marcello.

Young, blond, with expensive tastes, and an ambitious libido, Lux (played with archly savage self-serving attitude by Eliza Coupe) is the classic LA trophy wife. George (Chris Baker, a great newcomer with thick, floppy hair and those almost-too-pretty good looks that bring to mind a young Eric Roberts) is vain, spiteful, and a bit emotionally fragile. Marcello (Eric Roberts, bringing to mind a mature Eric Roberts) is a multimillionaire businessman who sadistically keeps the pair on a tight financial leash.

And this will not do.

Carousing the less reputable bars on the strip, “dumpster diving for dick,” because, as Lux has so aptly put it, she just needs “a guy to come on my face.” They encounter the ruggedly handsome, charismatic, and mysteriously dangerous Joe (the ruggedly handsome and charismatic Greg Finley). Soon, this trio hatches a simple plan: kill Marcello and inherit the millions in his estate. It has to work, right?

After all, they’re white, and they’re rich.

The Estate is a pitch-perfect camp thriller, filled with twists, turns, and some truly unpleasant, but utterly fun characters. These are people so superficial they make the snooty snobs that populate Bravo shows like Million Dollar Listing look like volunteers at the local soup kitchen. It’s a neon-noir Lifestyles of the Rich and Aimless. And it’s fabulous! Nothing is sacred (not even Alan Rickman), and we love the film for it. We’ve had a few recent films target rich, out-of-touch families (Knives Out, Ready or Not), but never quite like this. Almost everyone is out for something financial to feather their own hat, including law receptionist Mary (the always great Heather Matarazzo). Outside of the bum sleeping on the steps of the law office (as Lux and George bitch about struggling to live on $10K a month each), there are NO sympathetic characters here.

Director James Caper has given us a confident, SoCal-colorfully-bright, and glittering film filled with lavish LA scenery. There’s wonderful stuff like suggestive montages of splashing liquids, and what other movie has a cam model fight off an attack with an 18-inch pink dildo? Only this one, honey! Actor Chris Baker is also screenwriter, and he fills his script with sharp, trashy, mean-spirited dialog and clever, keep-you-guessing plotting. To the script’s credit, while The Estate shares gay themes with other murderous cinema classics such as Strangers on a Train and Deathtrap, it completely avoids making it a pathological trope. Affluence and avarice are what’s on trial here.

Baker, as noted, is terrific as George. He brings just the right amount of broken, lovelorn boy to his role. Yearning for acceptance and adoration from his father, elite society, and a boyfriend, he’s still an absolute spoiled brat crying “victim” at all the wrong grievances. Eliza Coupe brings a full-on bitch mode to Lux. She beautiful and beastly, and she and Baker make the perfect shallow pairing. Finley gives Joe an enigmatic, hair-trigger presence. He’s as malleable to the situation and as talented as Tom Ripley (a Matt Damon comparison echoed when a character refers to him as a “Good Will Hunting piece of trash”). He plays with, and lays with, both George and Lux, drawing them deeper into his dark secrets.

Black comedy par excellence, The Estate stand right up there with the best tawdry, sinful, sex -and-greed-fueled flicks out there!