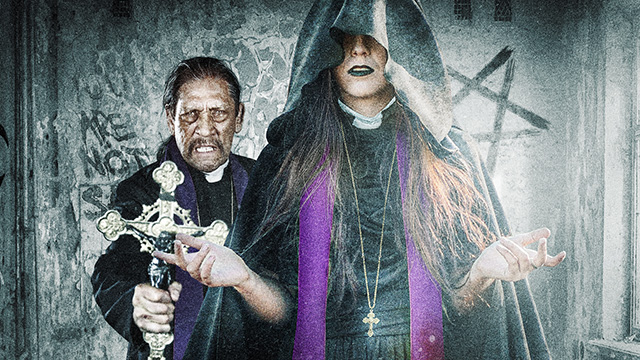 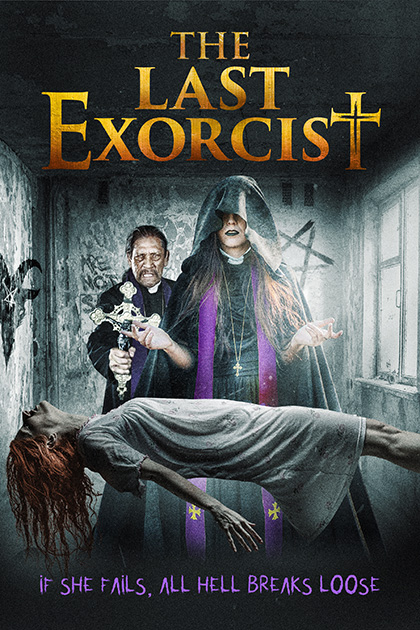 Demonic possession was quite the vogue in the 1970s. A certain film inspired a spate of imitators. Some were good, most were bad, almost all draped in foul-mouthed language and pea soup bile. The genre subsided in the ‘80s as the Regan-era became the Reagan-era. Fears were brought a bit closer to earth, and more human-based terrors ruled the screens. Lately, for reasons not quite as clear, but likely due to Hollywood’s inability to come up with anything fresh on its own, exorcism flicks have made a comeback. Again, some good…

“The Last Exorcist” is the story of Jo, a young lady raised, along with her half-sister Maddie, by the Catholic Church. Jo and Maddie’s mother committed suicide during a failed effort to cast out the demons that drove to kill Jo’s father. Taken in by Master Exorcist Father Peter, young Jo is a constant observer of his work. This training serves Jo well when Father Peter is assassinated in a terrorist attack in Vatican City, and as Maddie begins to follow her mother down a path of alcoholism and even more hellish behavior.

It’s not clear what writer/director Robin Bain is trying to accomplish with “The Last Exorcist.” Is she making a commentary on women’s roles in the Catholic Church? Is it a story of faith overcoming evil? What it isn’t is a particularly effective horror film. The scares just aren’t there. Demon possession is ripe territory for gross-out, over-the-top madness, but the worst we get is a bit of green vomit, some boils, and a few naughty words.

Bain’s previous directorial effort is the gritty, unsettling, and well-received teen prostitute drama “Girl Lost,” and the confident hand she shows in that film is sorely missing here. Not that “Exorcist” should have been treated with the same approach, but there are times where you might infer that this was the work of a first-timer. It is obviously low budget, and at times attempts to make the most of its production values (the location shots in Vatican City being perhaps the most unique). But in an age when everyone can get a nice drone shot, we don’t need one every time we move outside. And the film is filled with stuff that is just at odds with reality–and I don’t mean supernatural stuff. A man spontaneously combusts at a memorial service, and the crowd’s reaction is more than a bit “meh.” And when two half-naked women begin grinding and gyrating atop the bar at a honky-tonk, are we supposed to believe the crowd’s attention is diverted by three seniors playing old-tyme county onstage?? And the final revelation of Jo’s real purpose is so anti-climactic that it is almost irrelevant.

One thing the film does aspire to be is an oddball homage to Star Wars, with Jo as the young acolyte whose parent went bad, ghostly Obi-Wan apparitions, and even an Archbishop Yoda. When Jo suddenly breaks out the Buffy-esque fight moves, we half expect a voice to say, “Use The Christ, Jo.”

Rachele Brook Smith’s Jo is apple-cheeked, girl-next-door goody-goody. But the character is so bland that Grease’s Sandy would find her a bore. Danny Trejo’s weathered mug is always a welcome sight, but, as a former priest sent to aid Jo in her mission. Sadly, his presence is wasted here. While nice to see him in a change of pace role, we keep wishing he would suddenly kick some ass instead of standing by, looking amazed. It’s a role that could literally be any actor. Veteran thespian Nicolas Coster looks tired as the Archbishop, who finally accepts Jo’s destiny in the Church. As the colorful, free-spirited Maddy, only Terri Ivens seems to really bring any fire to her role. She’s a hoot. Sassy, strutting about with a sly smile and Southern drawl, Ivens is having a ball. And when Maddy begins to fall deeper into demonic possession, Ivens gives it her all. She’s wild, wide-eyed, and somehow still sexy as hell.

“The Last Exorcist” is not a great film, and it’s not an utterly gawdawful one either. It’s just incredibly uneven, filled with missed opportunities, and suffers from the critical flaw of being kinda pedestrian–especially whenever Ivens is missing from the screen.