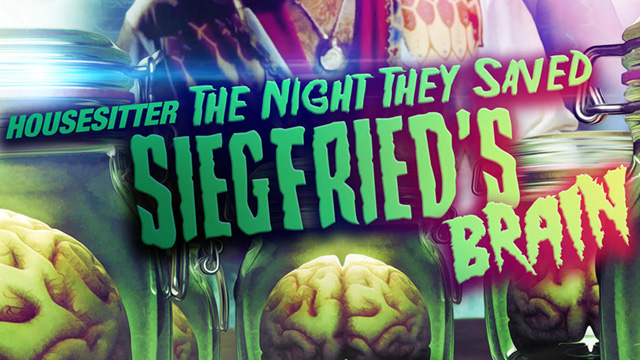 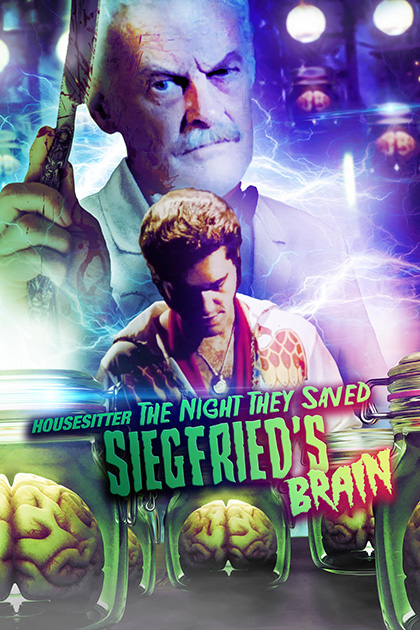 Wikipedia says: “New old stock (NOS), refers to merchandise being offered for sale which was manufactured long ago but that has never been sold at retail. ... Another definition of NOS is new original stock, meaning that they are original equipment parts that remained in inventory for a use that never came.”

If there was ever a NOS horror film, it could very well be “Housesitter…The Night They Saved Siegfried’s Brain!,” a 1950s mad scientist pastiche filmed in Kalamazoo, Michigan in 1987 but not completed until now. It’s a real anomaly of a movie, filled with a combination of dated clothing, humor, and sensibilities, but with bits and pieces of three distinct eras.

The basic plot, such as it is, concerns Dr. Ambrose “Doc” Crosby, (a hilariously over-the-top David Karsten), a brilliant but twisted scientist who seeks to perfect the ability to transfer one human’s mind and intellect into another. Time is not on his side, as Doc’s own mind is failing swiftly, and his experiment requires brains as its power source. LOTS of brains. Luckily, Doc’s top student, Andy (Richard Gasparian)–a brilliant, budding scientist and Elvis impersonator–and his buddies are holding a big party in the house they’re watching, which just happens to be above the mad doctor’s laboratory. And every party-goer has a brain to spare.

“Housesitter” is part 80s college comedy, part 50s horror send-up, and part everything else. Every time we enter Doc’s lab, the film switches to black and white. It’s a device you might think was decided after the fact until it’s hilariously referenced in a fourth wall break by one of the characters. The set is fantastic, with a wild mix of Jacob’s ladders, Bunsen burners, test tubes, Electrolux canister vacs, and enough Eveready Black Cat D-cells to power an entire neighborhood of toys on Christmas morning. Pastiche films work best when they balance period reverence with either ridiculousness or insane inventiveness. This film somehow manages to hit all three for much of its first half. And that’s where the film is at its most enjoyable.

Unfortunately, the back end of the film becomes a bit labored. It’s weird, all right, but there’s way too many bizarre threads pulled from this tapestry of strange characters and situations. As we follow Doc on his bloody mission, we’re in a whacky send-up of slasher films. But the victims are so annoyingly overplayed that the kills do not just gross us out; they come as a relief because these characters have overstayed their welcomes many scenes ago. The film is also sloppy as hell at some points. Andy’s girlfriend, barely even established as such, goes missing, kidnapped by Doc’s halfwit son Roger. The quest to find her becomes an imperative. Until it’s not, and then it is again. And then not.

One sometimes wonders how audiences would have received this film in 1987. It could be that the film we see was so edited with 2020 sensibilities in mind, but it almost seems as if the whole “shot in ‘87” is a hoax (it isn’t). The film feels like it's sending up the 80s as much as the 50s. Of course, you have to suspect touches such as “Drumpf Asylum” are contemporary touch.

Despite being incredibly uneven–and sometimes labored–overall, “Housesitter…The Night They Saved Siegfried’s Brain!” is a hoot. Appreciate it for its backstory and its flat-out bonkers sensibility.

Check your brain at the door.

This devil of a reviewer gives “Housesitter…The Night They Saved Siegfried’s Brain!” 3 out of 5 imps