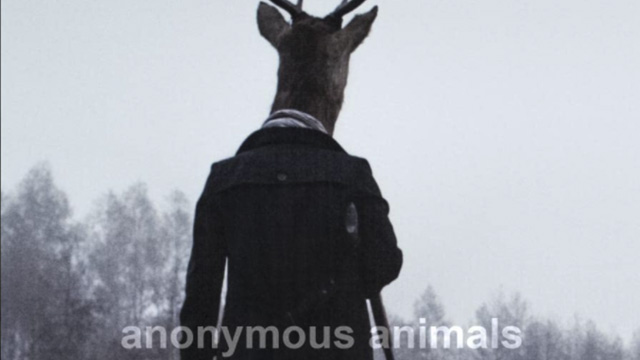 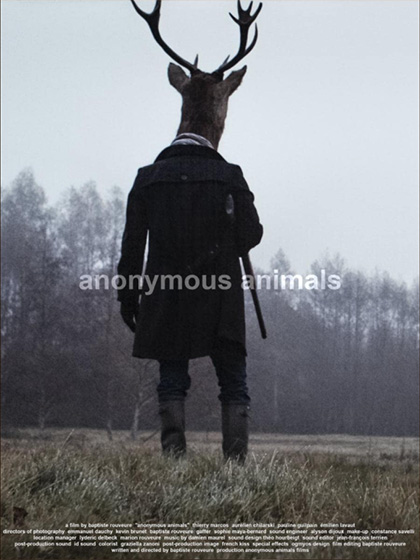 A man is left chained to a tree in the middle of nowhere. Left to the elements and to starve, is it to his relief or his detriment that a passing car decides to make the swing back to retrieve him? What reason does the driver have to bring him in?

Five people are led into a large, utilitarian building. Corralled into a pen to wait out a fate never fully shown, only implied, do they sit out their fate, or do they risk escaping? Or will both result in merely the same outcome?

A hunter stands in a glade of heather, hunting shotgun in hand, ears pricked for any sound…

The driver who retrieves the chained man bears the head of a terrier dog. The figure guarding the abattoir sports the head of a bull. Its co-worker has that of a horse. The hunter stands tall, antlers full, gun ready. At first, we think that these are masks worn as some sort of ritual or secret order, but then the grunts, snorts, and other guttural sounds become evidence of communication. We realize that these are meant to be literal animals. And it is then that we know definitively that the “Anonymous Animals” of the title are the humans.

Clocking in at just above one hour, filled with subtly allegorical imagery, not a stitch of human dialogue, and presenting tableaus and themes up for broad interpretation, “Anonymous Animals” (“Les Animaux Anonymes”) is a singularly unique film. And while not a horror film of the type we’re used to considering, it becomes one of the more introspective films to fall within that genre. Nothing the movie shows us doesn’t happen each and every day to those animals we don’t greet and cherish as our “family”–those animals that are “anonymous” to so many of us. A film like this might only have come from the French.

That declaration comes from two places. Many Western artists, if making this, would consider themselves working in surrealism. The French get surrealism at its core. This is not surrealism. It is allegory in the vein of Orwell and even Shakespeare. The French are also at that interesting crossroads of self-appointed Western superiority over nature and a very day to day understanding of how we regularly interact and rely upon it. Much of America is so distanced from such things, with our foam trays of meat canned veggies. Filmmaker Baptiste Rouveure, one suspects, is not some militant vegan with an agenda. The film is far too subtle, adroit, and restrained to be the work of some demagog. The goal here is to make the audience think, even for a bit.

And we do think. There is much to ponder. “Anonymous Animals” will prompt discussion, disagreement, and theory. And just when you believe you may have it all, Rouveure throws in a single shot to open even more possibilities.