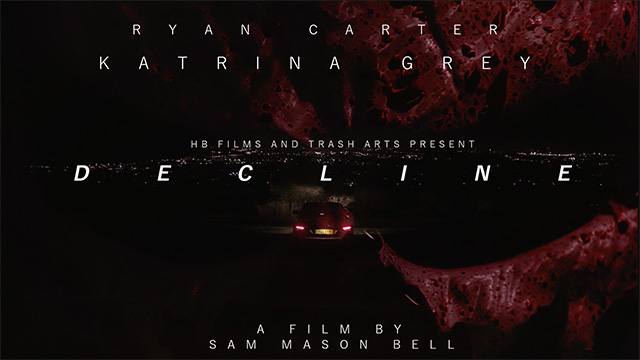 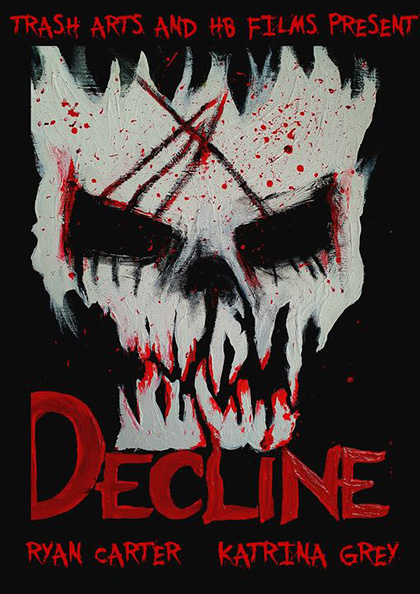 A masked killer stalks the streets of a city, meting out death to the homeless and others he encounters. It’s a formula, at once both tried and true, and tired and worn. It’s all in how the filmmaker handles the familiar slasher tropes and either subverts or augments them that makes or breaks the final result. With “Decline,” prolific UK low-budget-auteur Sam Mason-Bell has provided enough twists and fresh ideas to the slasher blueprint to make for an enjoyable, entertaining, and bloody cinematic endeavor.

We follow Ian, a young, sullen, obviously troubled young man (played by co-screenwriter Ryan Carter) as he wanders, at first seemingly aimlessly, through Portsmouth's streets. Interspersed with his travels are flashbacks to arguments between Ian and girlfriend Vanessa (Katrina Grey), an attractive, successful woman. Soon, however, we find that Ian’s troubles are manifesting themselves into violent murders. A horrific black and white mask becomes the face of his vicious, murderous alter-ego.

Sam Mason-Bell is an incredibly fertile horror filmmaker. That sort of relentless output may sometimes result in movies that hit the mark and some that might not entirely. And, as has been said about another prolific artist, Neil Young, even his misfires are interesting. But “Decline” is both interesting and on target.

The performances and the dialogue have great synergy. It’s obvious the actors had tremendous latitude for creativity and improvisation. The results are tense, realistic exchanges between Ian and Vanessa, culminating in one of the most believably uncomfortable office party confrontations put to film. The film takes on a near-documentary feel at times, and it gives the whole proceeding a great, unsettling vibe. That’s the result of Mason-Bell having faith in his actors' skills and the ability to communicate his vision with them.

Ryan Carter has the unenviable task of carrying the lion’s share of screen time, but it’s not a daunting task for him. He makes Ian moody, brooding, and strung to such a dark pitch that he can be malevolent even when sitting still. Katrina Grey makes Vanessa a character who can hold her own. She’s intelligent and formidable. Together they are a fantastic onscreen team and believably a relationship in decline. In a series of small roles, the rest of the cast manages to give their characters each quality and individuality.

“Decline” features some excellent photography by Jackson Batchelor. Via his facile camerawork, we’re given a gritty view of Portsmouth through the eyes of a broken, troubled murderer. It’s a critical element of setting the film’s tone and providing us with that verité feel.

“Decline” is not a plot-driven piece. It’s a character one. It echoes some of the great slasher films such as William Lustig’s seminal “Maniac” by showing us the mental deterioration of our serial killer. But it also doesn’t lead us down the obvious path. Ian’s final destiny is both unexpected and wholly believable. “Decline” is a dark, blood-soaked journey to an inevitable fate, and Sam Mason-Bell makes it a worthwhile one.