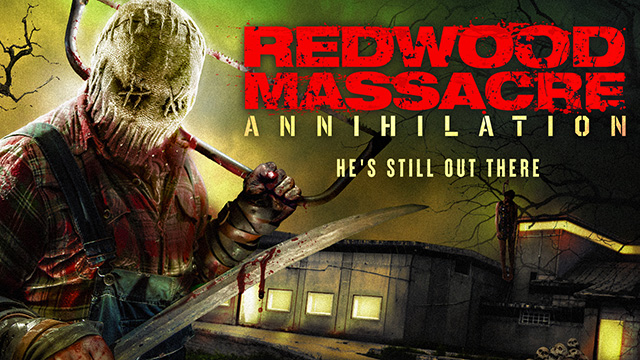 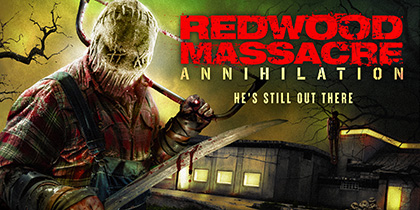 2014’s “Redwood Massacre” was a pedestrian slasher film filled with the typical tropes of a group of young people heading into the woods, years following legendary killings, being picked off one-by-one by a silent, masked killer. It was indistinct, undistinguished, and obviously left enough unanswered questions to have warranted a sequel.

Six years in the making, and we have “Redwood Massacre: Annihilation,” a film that decides to honor its source material by altogether jettisoning almost everything established in the first film. Writer/director David Ryan Keith returns, as does the first film’s flannel-wearing, burlap-masked-sporting killer, as well as the sole survivor of the first picture. Other than that, we’re in entirely fresh territory with “Annihilation,” and, given the uninspired original, that must mean we’re making these changes for the good, right?

Oh, where to start? So a young lady attempts to escape from our killer, still alive after our first film. She fails and is killed. Meanwhile, across town, wackadoodle Max (Grimm’s Damien Puckler) tortures Pamela, our first film’s surviving victim. He kills her. Max then approaches Tom Dempsey (Jon Campling), the father of our victim from the film’s opening. Tom has written a book about his daughter’s disappearance and the strange circumstances surrounding it. It seems the killer may be responsible for dozens of mysterious missing persons. Max convinces Tom that he has the answers the father is seeking. He has the killer’s burlap mask. Tom is confident that Max can lead him to his daughter’s killer. Tom’s other daughter Laura (Halloween 3/Hatchet’s Danielle Harris), is less trusting but still agrees to head into the wood searching for an abandoned RAF base Max claims is where he found the mask. They are joined by Jen (Terry Poe) and “protector” Gus (Gary Kaspar), a hulking, gun-toting macho beast.

And we’ve only barely begun our film.

Okay. So the concept of the original film taking place in the UK country is pretty much tossed away, despite the whole notion of a raid on an RAF outpost. Outside of the actress from the original film returning as Pamela, everyone has an unabashed American accent. Along with that seems to be a jettisoning of even the most basic logic and character development. Tropes exist merely to serve the advancement to the next scenario, common sense, or no.

Gus is the sort of uber-survivalist who can walk by just two windows of a vast house and proclaim, “There’s nobody here.” Supposed super-savvy badass Laura enters an underground bunker totally solo, armed with only the most pitiful flashlight, telling everyone else to stay above. The whole underground facility has modern tech only when it suits the story, but a 1940s switchboard (which functions like a short-wave radio) and creaky diesel generator otherwise. We encounter the mysterious Donna (Stephanie Lynn Styles), a research scientist lurking in the bunker, all frosted tips, boobs, and Botox. The whole place is littered with what appears to be dozens of fresh kills, still bloody. Max is some obsessive, sadistic killer on a mission that is never even hinted at, let alone explained.

Need one go on?

The one decent thing about “Redwood Massacre: Annihilation” rests on Danielle Harris’s shoulders. She at least gamely tries to give her character a go. It’s nowhere near enough.

If “Redwood Massacre: Annihilation” wants to establish its killer as a new horror icon, he would certainly need to be more than just a cool mask and an inclination to shrug his shoulders and twitch his head. While it may, on the surface, be a better made film than its predecessor, the original movie at least attempted to keep a basic story logic in order. This sequel doesn’t even try. It’s a jumble of weak ideas in search of a gullible audience.

This devil of a reviewer gives “Redwood Massacre: Annihilation” 1 out of 5 imps