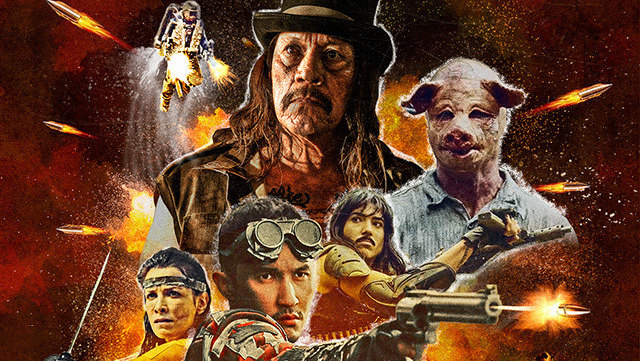 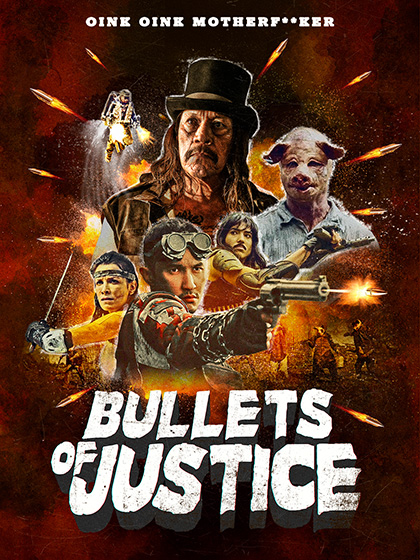 If a mashup of “Mad Max,” “Animal Farm,” “Desperado,” “Satyricon,” “Zoolander,” and a PETA fanfic film sounds interesting to you, then “Bullets of Justice” may just be the movie for you.

Then again, maybe not.

Set in a blown-out, desaturated, post-apocalyptic landscape in which half-human, half-pig “Muzzles” rule over humanity, fattening up and breeding them for food. The human race’s one last chance rest on the shoulders and formidable glutes of Rob Justice, a bounty hunter/runway model/Zen-spouting hornball. Boy, is the human race screwed.

The film attempts to be a manic, action-packed throw-everything-but-the-kitchen-sink-at-you-cult-film-in-the-making. It misses as much as a pig in a jetpack, wielding two rail guns with a little person in blackface strapped to its back could miss. Which, in this film, means completely.

Straight out of Kazakhstan, “Bullets of Justice” is pretty much a vanity project for writer/producer/composer/star Timur Turisbekov (and maybe a chance for him to have sex scenes with fully two-thirds of the female cast). It’s a film which gives us an endless morass of oddball details and violent, hyper-cranked action scenes and somehow still manages to be boring as hell. How can this be? The filmmakers have left in every good idea they had in the making of this (and all of the bad ones as well), but then the must include characters fiddling endlessly with stupid stuff like a helmet placed on the seat next to the, opening a rucksack, and even opening the bag holding the head that was just removed (endlessly) from that rucksack. There are huge stretches where nothing happens, or, if it does, it makes zero sense.

Turisbekov’s Justice is a misogynistic, vain, moron of a character. How he has become a folk hero is a mystery. Justice is obsessed with two things: an icky-incestuous relationship with his astonishingly beautiful (despite her gravitas-laden but inevitably unexplained porn-stache) sister, Raksha (the astonishingly beautiful Doroteya Toleva), and the luscious, perfectly formed ass of his modeling nemesis Rafael (Semir Alkudi). His mission to save humanity pales by compression. And Turisbekov’s is leaden, stilted, and just plain dull.

Here’s the thing: “Bullets of Justice” actually has some genuinely outré concepts. The problem (one of many) is that they’re just dumped in willy-nilly. Now, this works in a film like “Fifth Element” because that film is so chocked full of incredible visuals, bizarre fashion, and just non-stop bizarro. But when you include, without explanation: a robot man, the ability to transport through space (and maybe even time–the film is so sloppy it’s not clear), the aforementioned mustache, the ability to be both bulletproof and wield Qi/Star Wars Force-like powers and stick them in with characters who come and go out of nowhere, and others who rise from 100% positively dead situations without any explanation whatsoever? Houston, we have a problem. And great lines like “Bullets are always just… if they don’t belong to you, they will never hurt you,” contrast with nonsense like, ”There is no God, we call it ‘teleport.’” None of this is helped because a good chunk of the cast seems to have learned their lines phonetically.

“Bullets of Justice” is an offensive mess. Childish scatological and sexist bits are mixed with a genuinely unforgivable blackfaced character. We hope that the story might somehow redeem the film. But there is no real plot. Character’s alliances come and go as easily as the reality of the film. By the time we get to our final confrontation between Justice and our villain, the latter who performs a routine that would make Billy Squires “Rock Me Tonight” video look like the height of masculine posturing. That the showdown that follows is in the form of a dance-off isn’t amusing, it’s tedious.

By the way, Danny Trejo is in this. But that doesn’t matter.

This devilish reviewer gives “Bullets of Justice” 1 out of 5 imps.