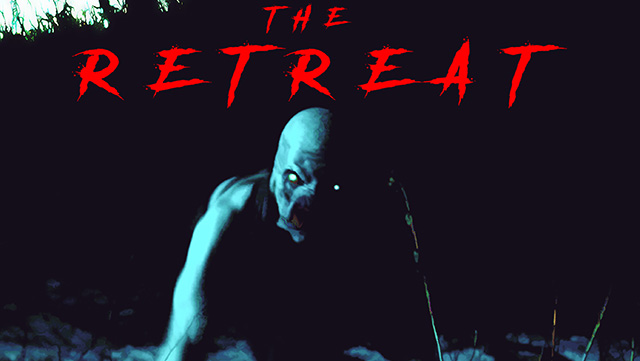 "The Retreat"
review by Diablo Joe 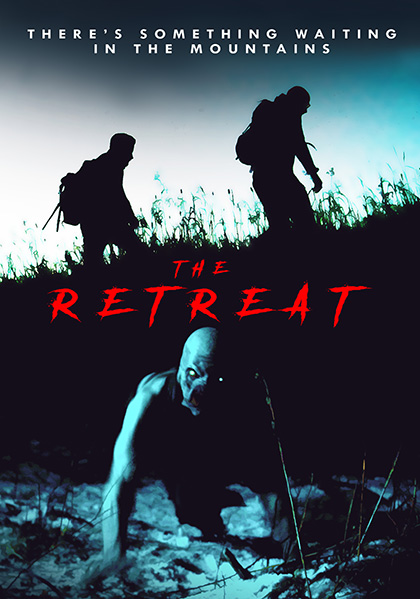 There's a conceit in filmmaking: You can present an audience with a scenario or group of possibilities that are open for interpretation, but you can't be ambiguous in your own intent. At the very least, it's bad when the latter seems to be the case, even if it's not.

"The Retreat" is the latest film from writer/director Bruce Wemple, whose previous film, "Monstrous," was released to VOD earlier this year. That film explored the legend of Bigfoot or, as known to this country's indigenous population, Sasquatch. "Retreat" delves into yet another Native American forest being, the Wendigo. And like his previous outing, it seeks to use its monster as a pathway to character exploration.

As his bachelor send-off of choice, level-headed groom-to-be on the move Adam (Dylan Grunn) has chosen a winter hike into the mountains with best man Gus, an outdoors neophyte man-child. Gus resents what he perceives as the loss of his friend to marriage. The pair start their sojourn into the hills with an overnight stay at a B'n'B run by Marty. That evening, Marty ominously regales them with the legend of the Wendigo, a beast-spirit that drives men to madness and cannibalism. They also meet Ryan, a loud and uncouth twenty-something heading out for a solo hike of his own.

The next evening, camped for the night, Gus presents Adam with a large bottle of psychedelic mushroom tea that Ryan had gifted them for their hike. Being the cautious, practical fellow that he is, Adam agrees to take it. Being the man-child that he is, Gus guzzles nearly a quart of it.

What follows is a mish-mash of posited realities and hallucinatory scenes that leave Gus believing he is tormented by the Wendigo and its unnamed bestial assistant. Is Gus losing his mind and his humanity to this ancient spirit? Is it the tea? Are Gus's mental fragility and the effects of the mountain elements taking their toll? Who knows? It certainly seems that director Wemple doesn't.

It's one thing to make a mentally unstable character proxy for the audience by having him be your film's unreliable narrator. But in doing so, the filmmakers need to firmly establish the film's point of view and stick with it. And questioning the Wendigo's existence is undercut when Wemple establishes it as real the first minute our pair arrives in the woods. Furthermore, if he posits that this could all be in Gus's mind, he can't give us scenes exclusively featuring other characters entirely out of that context. Pick a lane and stay in it.

It doesn't help that the film's characters are so rote. We've all seen the groom-to-be with his sad-sack best buddy feeling left behind. It's a tired trope that might work if we had Zach Galifianakis. But we don't. Add to that the "Ugly American" stereotype, the genre classic "harbinger," and the "doubting psychologist" (whose White rabbit lapel pin is a bit too on-the-nose). It’s one thing when smart people do things only dumb people would do; it’s another when dumb people do things even they wouldn’t.

Wemple tries to make use of the remote isolation and beauty of his Adirondack stetting. But this production value is marred by pre-existing tracks through the snow in almost every shot. It’s as if a film crew had traipsed through just moments before. If only Wemple had used his visual effects budget to remove those rather than give us some hackneyed acid-effects.

“The Retreat” is a weak film with non-existent scares (despite Nate Van Deusen’s score insisting we be scared at every set of eyes glowing in the dark). Bruce Wemple has given us a bunch of unpleasant characters meandering through false stops, starts, and ridiculous plot turns. And in the end, he’s seemingly desperate enough to resort to a tired scare trope that anyone who has seen enough YouTube horror shorts would find tedious.