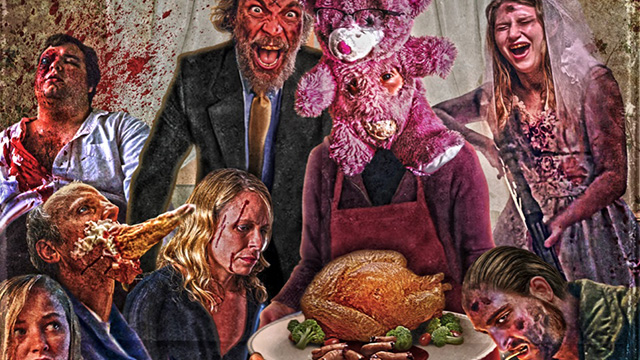 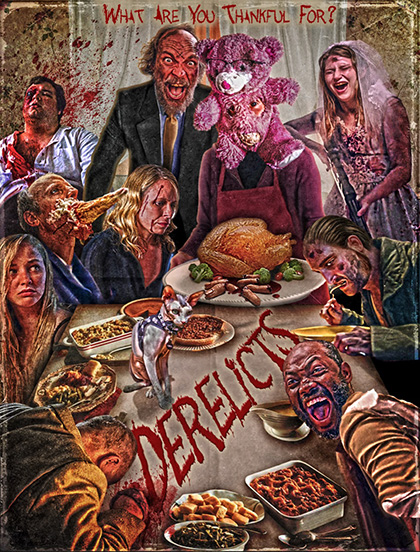 Family. Horror cinema has a long history of twisting the family model into something terrifying. “The Devil’s Rejects,” “The Hills Have Eyes,” “Spiderbaby,” and even “Freaks” are some of the finest examples of this. And of course, the pinnacle of the sub-genre, “The Texas Chainsaw Massacre,” set the gold standard for vicious, ruthless film-horror family. Also from the Lone Star state of terror, director Brett Glassberg’s “Derelicts” is the latest entry into this trope, and it is a welcome one.

Gregg is readying for Thanksgiving, cooking, and attempting to corral wife Constance and family in anticipation of their guests. When the grizzled Cap decides that his “family” should be joining the meal instead of the expected relations, there is little to be thankful for as the meal becomes a main course of terror and torture. It’s a simple formula, tried and true, but it’s what Glassberg and his cast bring to the dinner table that makes “Derelicts” worth the effort of pulling up a chair.

Cap and company are a ragged, unkempt bunch. Cap himself is mentally damaged goods, hinting at Nam-related PSTD issues, but his anecdotes indicate that he may be deluded even on this topic. The hulking Forrest is second in command, unhesitant in meting out brutality as needed. Bo is a combination of twisted libido and sadism–a genuinely unsettling trailer park femme fatale. Sal tries to make up for his low rank on the totem pole with volume and bluster. His brother Turk, a non-verbal wild-man-child sporting a stuffed animal as a mask, is unpredictable enough that all are wary when he is around.

But our Thanksgiving family is not so sweet in and of themselves. Gregg is a sad, seemingly emasculated man, supported by the ambitious career-obsessed Constance. Obsessed with porn and pleasuring himself, son Leslie is an unctuous ass. His sister Barbara is a broken, coke-using mess. Also living in the house is Constance’s father, a sanctimonious gynecologist dedicated to tending to his girlfriend Bev’s private parts. They are, themselves, an unpleasant bunch, bickering and self-centered, and the worst about them is revealed as the film goes on. Still, hardly deserving of what is in store for them this holiday. For a lot of movies, unlikeable characters would be a bug rather than a feature. But Glassberg uses this to even the playing field a bit.

This stylishness extends to the cinematography. Brightly lit and desaturated, “Derelicts” has a look all its own. It’s also refreshing to see the villains be articulate (except for Turk) and intelligent (even Sal), and our protagonists stay away from the expected stupid decisions. Likewise, the script is clever, dodging the issue of cell phones and cop innovatively.

“Derelicts” may never quite find itself on the status of its brethren, but it’s a fast-paced, exciting exercise in some delicious viciousness, done with smarts and creativity.