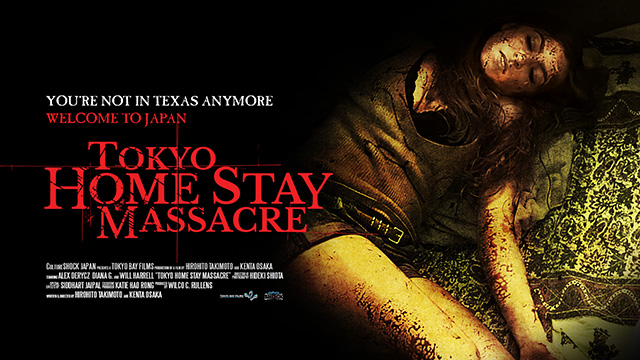 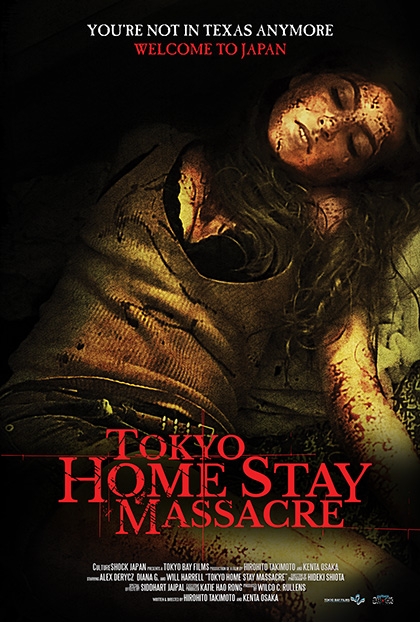 Sometimes perceived as a bit of a slur, the Japanese have a term for non-Japanese: “gaijin.” Like any country, outsiders are often viewed as uncouth and of lesser intelligence. But it is Americans who have earned the title “ugly.”

“Tokyo Home Stay Massacre” is the tale of three American YouTubers who have traveled to Japan and are welcomed into a Japanese homestay. The three are there to document… Well, we’re not quite sure exactly what. But the family with whom they are staying have plans for their guests. The time has come for an ancient ritual, and their American guests are due to be part of it.

The main failures of “Tokyo Home Stay Massacre” come down to its American characters and its inability to decide what sort of film it wants to be.

Our trio at first seem to be a parody of how Japanese view Americans, but evolve into what could be a Japanese 5-year-old’s idea of Americans. The flat-out awful acting from our three leads doesn’t help things. It’s drama department level at best. Overwrought emoting pauses only for an impatiently waiting for their cue to present more overwrought emoting. The Japanese actors far better overall, but we’re forced to put up with our constipated-looking victims for far too much of the film.

We’re presented with a pregnancy subplot, a love-triangle subplot, an oddball neighbor subplot, a Christian fundamentalist subplot, a mincing eunuch cop duo subplot, and even a vegetarianism/teetotaler subplot. None of these are ever explored or explained, resulting in a mish-mash of elements. Sudden, over-cranked camerawork, absurd slapstick, and gushing blood and bile are all tossed together. Characters are introduced and then immediately ignore, leaving one wondering if huge chunks of the picture were left on the cutting room floor. Nothing in the movie seems motivated by anything other than pure whims of the filmmakers.

Sometimes films are so bad that they’re actually enjoyably so. At many points, we expect “Tokyo Home Stay Massacre” to become one of those. The WTF air of its final act that almost demands a viewing just for curiosity’s sake. But it’s really just a senseless, and often dull, mess. Nothing is finally weird enough to truly stand out.

POSTSCRIPT: At least one other reviewer has noted that the film screener lacked subtitles for the extensive Japanese language dialogue. Indeed, in writing this review this too was the belief for the first 20 minutes before it was realized that they were not baked in but needed to be turned on in the playback settings. The film was then rewatched with the appropriate translation, but this made little difference in the films coherence.