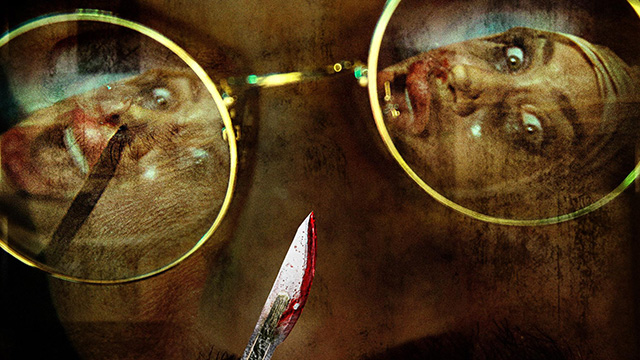 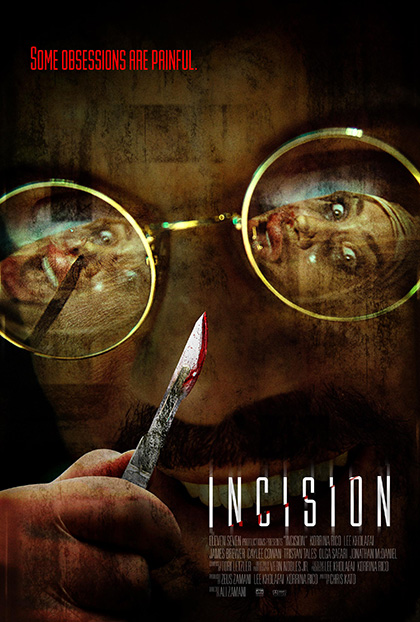 In search of a missing laptop, four young “Beautiful People,” Internet influencer Alexa, her NFL player boyfriend Matt, record producer Calvin and pop star girlfriend Trinity arrive at a house in the LA ‘burbs. In tow is Alexa’s young sister Becca. What they discover is not any ordinary suburban family, for this is the Cunningham family. And happy days are decidedly not in store for our crew as family head Dr. Gene, a crazed plastic surgeon, has his own idea of “Beautiful People.”

“Incision” is a tough film to review. It has some enjoyable and creepy elements, but some awful filmmaking decisions often offset those and, ultimately, threaten to spoil the fun. Where this balance falls will be for each viewer to decide. But the film swings so far from the good to the bad it becomes a challenging decision to make.

Probably the worst offense is that the film is rife with ridiculously foolish character decisions. Our protagonists first send surfer-dude bud Kenny to the house to retrieve the laptop. Arriving hours and hours later, finding his car still there, they decide not to call the cops. Instead, they accept the crazy Grammy’s offer to enter the home and the unctuously skeevy-AF Dr. Gene’s overly generous offer of expensive scotch. From there, the group ignores and confounds almost every opportunity for escape that falls in their favor. Our characters might not be bright, but it’s that Geico commercial on anabolics.

Plot and structure-wise, the film is a mess as well. It contradicts itself multiple times throughout the picture; its sense of time is off-kilter and ridiculously compressed (indeed, the number of surgical procedures our characters endure makes Gene the turn-and-burn surgeon of the century). In what might have been a misguided attempt at character development, the opening scenes present us with multiple scenarios and set pieces that are both trite, superfluous, and even annoying. And there is a bizarre emphasis on the TV show that Granny watches endlessly. A medical soap opera starring “Picket Fences” and “Saw” franchise actor Costas Mandylor as a lothario surgeon, it must be this universe’s Law & Order because it is ALWAYS on. Most egregious of all, director Ali Zamani and writer Chris Kato don’t resolve the film. It just ends, leaving us hanging.

Stronger are some of the performances. Of our protagonists, Korrina Rico shines brightest as Alexa. She’s believable as someone who would have a loyal Internet following. Self-centered enough to have her own channel, but likable enough to draw followers to her. Jonathan ‘Lil J’ McDaniel is great as Calvin $oundz. And Lee Kholafai brings the right level of muscle-headed machismo brooding to a former MVP eclipsed by injury and his girlfriend’s success.

But it’s our creepy Cunningham’s who brighten the screen with menace and flat-out bizarro performances. James Allen Brewer’s Dr. Gene gets under the audience’s skin as much as he does his victim’s. Aloof, fey, and sporting a twisted permanent smile, he’s both memorable and endlessly unsettling. John Wallbank is great as skeletal hulk Philip Cunningham. But the standout performance belongs to Marik Knight as the young Timothy. Mischievous, with a bizarre lisp, Timothy is a serial killer in training. He’s a tiny, ninja-like sociopath and positively terrifying.

The film is moody and well shot and makes good use of its settings, contrasting the Malibu homes of our group with the Gothic-tinged interiors of the Cunningham home. And when it decides to get gory, it does so in a horrifying fashion. There’s one effect so grisly and unexpected that it almost is worth the price of admission alone. If it had marked a real turning point in the film, then “Incision” would be easier to recommend.