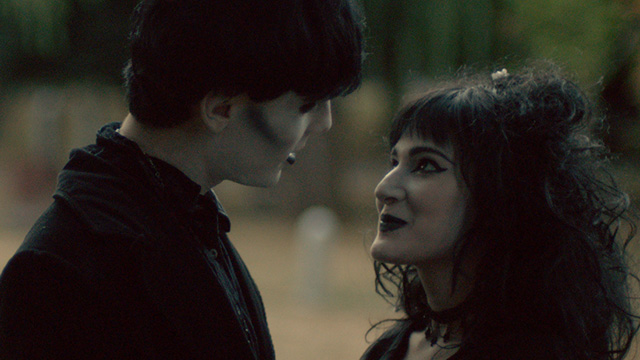 Diablo Joe Reviews - My Summer as a Goth

"My Summer as a Goth"
review by Diablo Joe 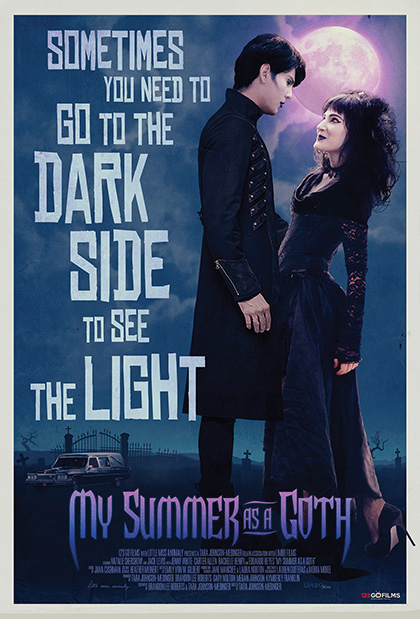 My Summer as a Goth

Anyone of a certain age remembers the heyday of the teen romantic comedy. Exemplified, not just by John Hughes, but also by filmmakers like Martha Coolidge and Howard Deutsch, they were the sort of light summer fare that somehow managed to be an adult's idea of teenage life while actually managing to pretty well define it. "My Summer as a Goth" is a throwback to those films. It's a fun, if somewhat empty-calorie, teen rom-com with eye-liner and black lipstick.

Mourning her father's recent passing and with a mother too obsessed with her career, Joey Javitts (an earnest and charming Natalie Shershow) is a 16-year-old girl struggling to define herself. While well-liked in school, she just doesn't fit in anywhere. She's a girl in search of an identity. So when a summer stay with her grandparents presents her with the pale, slender presence of the vampiric Victor Ireland (a pitch-black-perfect Jack Levis), Joey is enthralled. And when Victor decides she’s worth both his interest and his mentorship into the velvet-draped world of Goth culture, Joey is in for a unique summer vacation.

“My Summer as a Goth” pretty much follows the basic guidelines for this sort of genre. Director Tar Johnson-Medinger, along with co-writer Brandon Lee Roberts, don’t reinvent the wheel here, but then it doesn’t seem like they’re trying to. “My Summer” is essentially a mash-up of “Valley Girl” and “Pretty in Pink,” but done so earnestly and with such heart that it wins the audience over despite being derivative. It also manages to touch on some themes that would have been either unrecognized or outright verboten in the ‘80s. To the film's credit, it handles these topics without sensationalism or judgment.

Our two leads have some decent chemistry with one another. Shershow is completely likeable and energetic, a teen eager to explore herself, though not excessively naïve (the film does ask her character to be a bit too fish-out-of-the-water at times). It’s nice to see a 16-year-old who is decently well-adjusted and confident but still soul-searching enough to fall in with Victor. As our resident Goth-lord, Levis is about as perfect a casting choice as could be. His Victor is all arch aloofness. For him, life is an ongoing art project, and Joey is his latest canvas. Anyone who has spent any time even on the fringes of Goth culture has met at least one Victor, and Levis is superb in the role. He’s a grand peacock, commanding attention by showing his colors (or lack thereof).

The supporting cast is pleasant, and never annoying, even when their characters are the stereotypical buffoonish grandparents. In those roles, Fayra Teeters and Jonas Israel are oddball enough to be uncool, yet concerned enough to be grounded. They’re Deborah Foreman’s parents in “Valley Girl” if those two were a bit older and a bit less hip. As the punkish Antonio, Eduardo Reyes lets his charm overcome any acting shortcomings and Rachelle Henry is adorable as Joey’s best friend Molly. But the pair who really steal the show are Carter Allen as Cob and Jenny White as Pen, a perfect Goth pair until-death-do-they-part. Allen genuinely seems smitten with White, and why shouldn’t he be? She evokes a wide-eyed black-laced Maggie Gyllenhaal, and she’s positively lovely.

“My Summer as a Goth” is exactly the film it sets out to be. For a sub-culture rooted in the ‘80s (after all, Goth’s anthemic “Bela Lugosi’s Dead” is over 40 years old!), an ‘80s-style teen comedy suits it perfectly. Some Goths may take umbrage with it, but that’s fine. As the film enjoys showing us, Goth is not some black, monolithic monument, but a bouquet of roses (albeit, perhaps, dead ones) in a beautiful selection of grays.

And, as it makes clear, sometimes the best way to fit in is to allow yourself to stand out a bit.