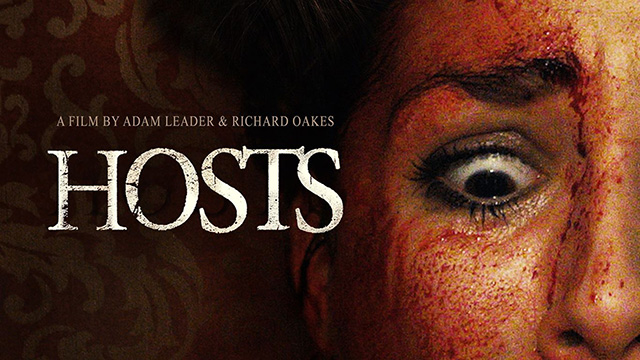 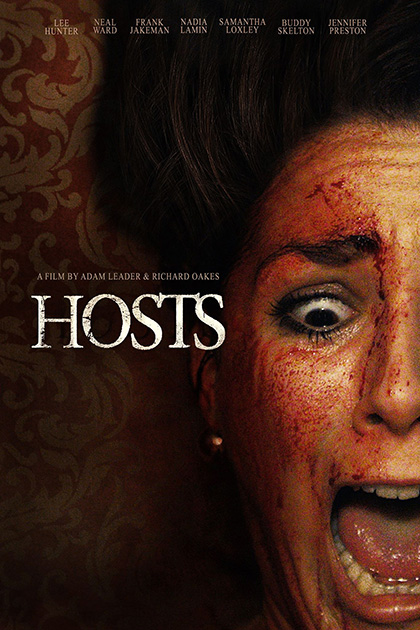 As one of the most joyous of the year’s holidays, Christmas is rife for subversion in the name of horror. Crazed Santa’s aside, who of us who celebrate hasn’t been to a holiday dinner where there was that person. The nightmare guest at the table? “Hosts” takes that up a notch and then some as we join Michael and his family in welcoming neighbors Jack and Lucy, who are intent on spreading anything but cheer, to dinner.

The film begins with both warmth and goodwill, but we are quickly made aware that something is frightfully amiss. As the evening goes on, the night of holiday joy turns to violence and mayhem, with familial ties splintering almost as intensely as bones. What has happened to Jack and Lucy? What has driven this seemingly pleasant young pair the brutality they wage upon their hosts?

That question looms large over the film. Directors Adam Leader and Richard Oakes use it deftly to keep their characters–and the audience–on edge. And what a precipice of tension they create. “Hosts” is one of the more unnerving movies of recent memory. It’s a virtual playbook on using shadow, music and sound, effects, shot composition, and editing to creep the living bejeesus out of an audience. Combine all that with graphic brutality and some wickedly mean-spirited strangeness, and Leader and Oakes have one hell of a horror package for us to unwrap.

“Hosts” is the sort of film that can stand or fall based upon its cast, and, to a one, they don’t fail to deliver. As Jack and Lucy, Neal Ward and Samantha Loxley have a great chemistry together, whether it be playfully swapping presents or terrorizing the folks next door. When push comes to violent shove, they are terrifyingly off-kilter. Frank Jakeman (Michael) is a big, gently gruff, and sweet patriarch horrified at what is befalling his family. As brothers Eric and young Ben, Lee Hunter and Buddy Skelton are excellent in their roles, as is Jennifer K. Preston as their mother. The standout is sister Lauren, played by Nadia Lamin. Lamin takes us through her character’s hell and determination to keep her family from suffering, no matter the cost.

The directors make great use of straightforward lighting and visual effects to prod us into discomfort and anticipation that then pay that off with some intense and gory practical effects to seal the deal. It’s startling and brutal stuff.

The film isn’t perfect. Early on, Michael and his family seem a bit too oblivious to their guests' behavior until it’s far too late. And every once and a while, the beats of the film seem slightly off. But no matter, the cumulative effect is a nasty punch to both the gut and psyche.

Like an earlier 2020 film, “An Ideal Host,” with which this film shares a similar premise as well as name, the less you know going in, the better. Unlike that picture’s relentless hilarity, Hosts” brings no joy to this holiday gathering. A right nasty piece of work, “Hosts” will keep its audience speculating and sufficiently rattled throughout its length and even beyond.