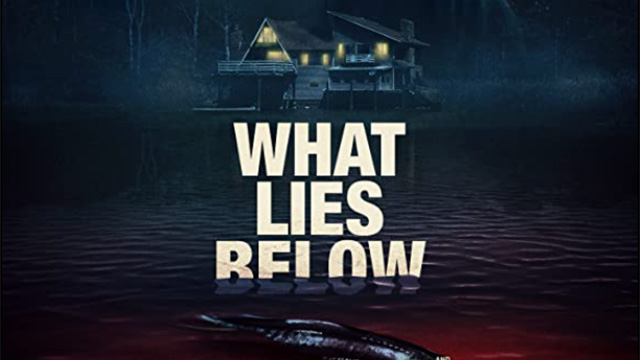 Diablo Joe Reviews - What Lies Below

"What Lies Below"
review by Diablo Joe 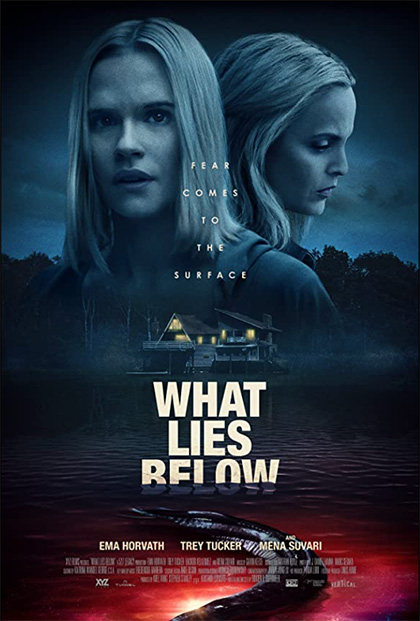 This past year saw the release of several horror films exploring similar themes, possessing some key overlapping visuals elements and other shared concepts. It's kind of interesting how parallel they are while still being unique from one another. And each is an excellent movie in their own right. "What Lies Below" is one of those films.

Written and directed with tremendous confidence by Braden R. Duemmler, "What Lies Below" tells the story of Liberty (Ema Horvath), a young lady returning from school to share some time with her mother (Mena Suvari) at their lakefront summer home.

Liberty is, in many ways, the more mature of the pair. She’s independent and well-composed, with a fascination for archaeology and the sciences. Outside of innate beauty, she shares few traits with her bubby, carefree cougar of a mother. That is until she meets her mother's new boyfriend, John (Trey Tucker). Strappingly tall, rugged, and handsome, a marine biologist to boot. Involved in cutting edge research and deeply fascinated with nature, he immediately overwhelms Liberty with a mix of charm, intellect, and sexuality. She is fascinated. And slowly, John begins to return that interest–with ever-darkening and more mysterious intent.

Watching "What Lies Below," you'll often think you have a handle on the film and where it's headed, but it does an excellent job of keeping you on your toes. It certainly delivers a wallop of tension throughout, paired with some nicely unsettling moments. Much of this is due to Duemmler's ability to take us along with Liberty's journey. We're as fascinated and curious about John as she is (if perhaps, for different reasons). His interactions with Liberty, initially just charming–if too good to be true–become both more sexualized and ominous. We're equally terrified with each new revelation she uncovers about her mother's beau.

Ema Horvath deserves equal credit in that regard, with an outstanding performance as a young woman whose knees are suddenly buckled by a masculine presence unlike any she has ever encountered. It rattles Liberty to be unable to control her thoughts and emotions. Horvath will be an actor to watch, and news of her casting in the upcoming "Lord of the Rings" television adaptation means we probably won't be the only ones doing that in the future.

Trey Tucker, as John, handles what could have easily been a messy role. Is John a genuine perv, equally interested in his girlfriend's daughter as he is her mother? Just an inherent social misfit hiding under a perfect skin? Or is he something else altogether? Tucker manages to keep us guessing. He's physically spot-on for the role, with endless white teeth and a bearded charm that evokes "Westworld" actor Ben Barnes (something many viewers will not take issue with). It's interesting to see Mena Suvari, the Lolita-like ingénue of "American Beauty," in a different twist on that scenario. Mother Michelle is blithe enough to fall desperately for John but without being cliché. It's nice to see a mother-daughter still expressing mutual warmth and caring despite never being fully in tune.

What starts as a lesson in discomfort becomes, by the film's end, one of gut-wrenching tension. The cinematography, at first filled with natural deep greens, shifts to blues, reds, and the blackest of blacks, just as the movie’s tone begins to become more and more bizarre. In the last few scenes, paired with a rather clunky plot contrivance, Duemmler makes a few directorial choices counter to his previous “less-is-more” approach utilized throughout the film. While they don’t undermine the ending, they're less satisfying than intended. But the film’s last quarter still grips the viewer with a helluva chokehold.

This is an effective film at any level. But for a first picture, “What Lies Below” is a beast of a horror film in every way. Sporting great performances and deft direction, it is smart, gorgeously shot, and, most of all, anxiety-inducingly tense.