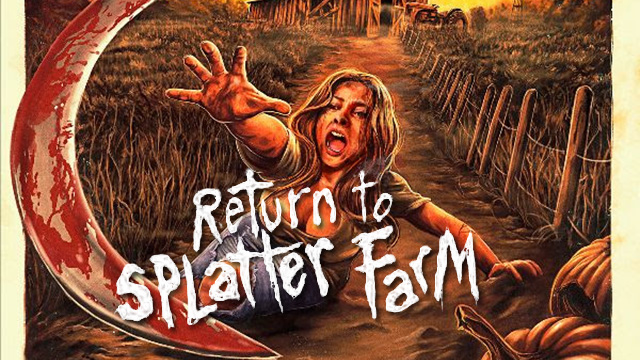 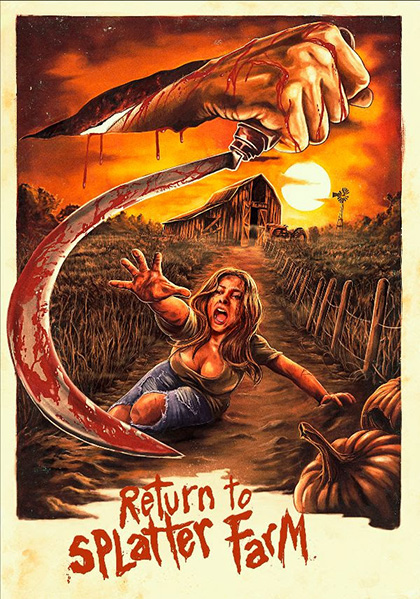 When you have a title like “Return to Splatter Farm,” audiences expect a few things. A “return” is good, though probably forgivable if absent. A “farm,” yeah, sure. Please, and thank y’all. But there damn well better be some “splatter!” And with that title, we better get some fun. Good, clean, silly fun. And we don’t even need the “clean.” Better, yet, if it’s missing. “Return to Splatter Farm” is a cheeky, irreverent, and enjoyable slasher flick that lives up to its name. It’s low-buck horror that just delivers the goods. Directed by Mark Polonia and Jeff Kirkendall–the latter who also wrote the film and stars as it’s rural ripper, Jeremy–it’s precisely the film it wants to be, and that’s dandy.

Years ago, a small Pennsylvania farm was the site of a suite of murders. Thirty-three years later, Bobbi has inherited the farm and makes her way there along with her friends, footballer Brad his bratty girlfriend Liz, beer-guzzling tomboy Daphne, and goofball metalhead Gopher. When they arrive in town, the locals warn them of the farm’s danger. Upon arrival, the group settles in, but they soon realize that they should have heeded the warnings. Jeremy, the hulking caretaker for the farm, has never left, and neither has anyone else over the decades.

This is, of course, far from original stuff. But there is plenty of the requisite stabbings, beheadings, and limb hackings, as well as some judicious nudity thrown in just in case the killings weren’t enough. What’s great are the offbeat twists that Polonia and Kirkendall have given the murders with the assistance of stuff like flare guns and even mother nature. And while horror audiences have seen their share of foodstuffs used as guts and gore, this is perhaps the first instance of ramen noodle brain matter in film history.

It’s obvious the cast is having fun with their roles. Danielle Donahue’s Bobbi likable and spunky. Mel Heflin, last seen in “Teacher Shortage,” another fun slasher, is a perfect bitch. Her Liz is catty whenever any woman approaches boyfriend Brad but trashy enough to drop top when townie grease monkey Josh comes around. Jennie Russo is fun as Gina, a local housewife Gopher has labeled “MILF,” but who has her eye on Liz’s man. But it’s James Kelly who steals the show. Kelly is wonderfully obnoxious comic relief as Gopher. The guy is the total go-with-the-flow geek, and his collection of VHS era-referencing tees will be the envy of many a viewer.

“Return” is far from high cinema, but it’s the product of a group of filmmakers who just got their film made, any obstacle be damned. Besides the poor-college-student brains, one has to chuckle at some of the other corners cut, a few of which are genuinely curious. Daphne’s beers are all soda bottles with completely black labels. Maybe no one had their ID on the shoot?? And when Liz accidentally on purpose spills coffee, perhaps some grip drank the prop because Gina ends up making a colossal ado about being covered in plain water. But no matter, it’s this sort of hardscrabble make-do that gives films like “Return to Splatter Farm” enjoyable and worth a watch. Well, all that, and maybe the mighty spiffy shirt the town sheriff wears.

By the time “Return to Splatter Farm” segues from its “Texas-Chainsaw”-tribute final shot into its metal ska theme song, Polonia, Kirkendall, and Co. have given delivered a fun, messy horror nugget. They prove that a film can do just fine on a few pints of splattered blood, perhaps a bit of naughtiness, and a ton of heart, soul, and some ramen brains.