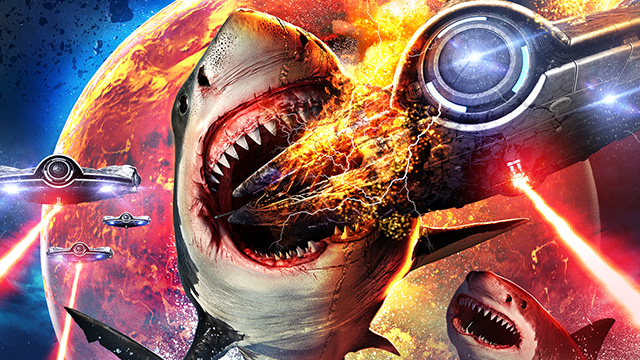 "Shark Encounters of the Third Kind"
review by Diablo Joe 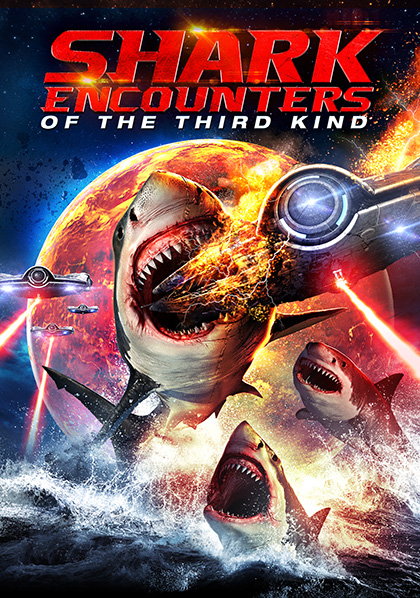 Shark Encounters of the Third Kind

In the late 1970s, a magazine called Argosy had originated as a pulp magazine back in the first quarter of the century, evolved into a sleazy men’s magazine in the late ‘60s, then mutated into a sleazy mag obsessed with sharks and UFOs. Of course, this mirrored the country’s fascination with the topics thanks to the films of one Hollywood director, Steven Spielberg. And while Mark Polonia may have a career that reaches back almost to the late ‘70s and quite possibly grew up on a diet of rags like Argosy, even he would probably agree that he’s not quite Spielberg level.
Not quite.

Melding the subjects of sharks and UFOs into one hopefully thrilling movie might seem like a no-brainer to some, and, often, “Shark Encounters of the Third Kind” expects you to have no brain. To attempt to describe the plot is a bit of madness. It seems that aliens, stuck at the bottom of the ocean since the end of the Second World War, have begun making use of sharks to terrorize and help conduct experiments on humans in a small, seaside community. Plaguing swimmers and treasure hunters, the aliens find themselves thwarted by an Afghanistan-War-vet-turned-harbor-patrol and a female psychiatrist who counsels alien abductees.

Polonia, who also directed this year’s silly and enjoyable “Return to Splatter Farm” (recently reviewed here), works with a number of his acting regulars, including that film’s Jennie Russo and Titus Himmelberger, as well as “Return’s” killer and screenwriter, Jeff Kirkendall. “Shark Encounters” might have benefited from Kirkendall’s writing input as the script, by frequent Polonia collab John Oak Dalton, seems to have favored a hodge-podge of ideas over coherence. It’s quite impossible to say what is going on. There’s a lot of sharks, but are they all working at the behest of the aliens? What do the aliens actually want? What is the significance of the shrunken shark in a bubble? What of the town’s homeless cat population? What of our harbor patrol’s college career? What of the film’s cautionary-take ending? And, most of all, what of Amelia Earhart?

Which isn’t to say that the result is unwatchable–it strangely is–but there’s a far more entertaining film buried in this idea. Polonia’s editing doesn’t help matters, as the whole of the action seems to take place in a single afternoon, as none of the cast change clothing at all. Yet, there’s a night shark-attack inserted bluntly into the story, immediately followed by a return to our treasure-hunters opining that mere hours have passed. And our psychiatrist seems to repeatedly go back in time to a well-liked table, glass, and beer combination. It’s sometimes baffling, but we tend to roll with it after a while.

This film makes the most of its budget in a go-for-broke fashion that is actually kinda commendable. From the popsicle stick encrusted alien device, to the CGI shark fins, to cinema’s absolute worst papier- mâché severed head, “Shark Encounters” fearlessly uses whatever it can find to get the job done. Possibly a good 10% of the film is stock footage, enabling Polonia to give us vistas otherwise impossible with just his resources. However, this also means we are repeatedly treated to the same shot of a boat's bow tearing through the water (all that’s missing is a Jan-Hammer-esque soundtrack). But you have to credit Polonia and his troupe for getting the job done.

“Shark Encounters of the Third Kind” is a weird film to try to recommend. It’s not a good movie, and it’s not quite bad enough to be good-bad, but anyone who just enjoys fun films would probably not regret having watched it. Maybe “The Finest Alien/Shark Film of 2020” is the way to describe it best?