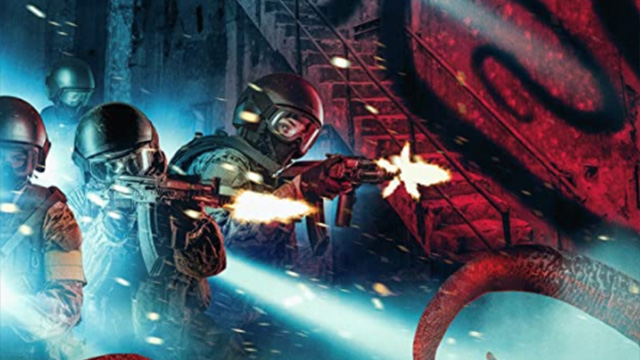 "The Facility"
review by Diablo Joe 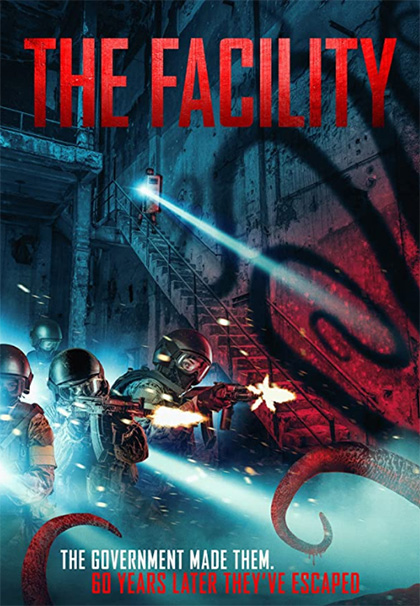 A group of five British twenty-somethings breaks into a remote underground scientific compound, shuttered for over half a century. The group finds far more than they bargained for as mutated creatures, hidden for decades, emerge from the depths, while a team of black-ops militia descends upon them from above. Forced to work together to fend off the facility's residents, members of our team of wayward explorers and the soldiers begin experiencing the sense a sense of familiarity with the place and its zombie-like terrors.

Unfortunately, it is a feeling that the audience will probably share. Part "Resident Evil," part "The Descent," part “Cabin In The Woods,” and part "Aliens," "The Facility" seeks to use dark underground tunnels, hallucinogenic flashbacks, and a mysterious research project to conjure up scares and Lovecraftian terrors. But, partially because it echoes those films and others in so many ways, this is all stuff we've seen before and done better.

There was anticipation that this film would bring some British acting heavy-hitters to the table as well. Seeing names like Adrian Edmondson (“The Young Ones” snotty punk, Vivian), Carol Cleveland (Zoot/Dingo in “Monty Python’s Holy Grail” and the troupe’s go-to girl over the run of “Flying Circus”), Stephen Marcus (“Lock, Stock, and Two Smoking Barrels”), and Sally Philips (the “Bridget Jones” films) in the credits is a bit deceptive. Almost all are regulated to flashbacks and hallucinatory scenes, with Ms. Cleveland seemingly missing altogether.

“The Facility,” it seems, joins several horror films over the past few years that have turned out to be “secret” sequels that, due to different distributors, time, or other factors, are promoted without overtly referencing their predecessors. This picture's original title was “The Rizen: Possession” (and is identified as such in the end credits of the review screener) and is a follow-up to a 2017 production entitled simply, “The Rizen.” This film seems to have lifted a lot of the flashbacks and 1950s-centric footage from the first.

While there’s nothing inherently wrong in that, “The Facility” still feels like a cheat. Perhaps Matt Mitchell, writer and director of both films, delivered more of a story with “The Rizen.” Here, Mitchell gives us not much more than a budget video game. And a not particularly exciting one at that. Characters spend the bulk of the film searching through the different rooms, uncovering clues, and being attacked by humanoids in ratty mummy-like headwraps. Doors are conveniently unlocked until they are (conveniently for the film) inconveniently locked. Rooms are invitingly pre-lit with bright, functioning desk lamps. For a complex sealed for 60 years, things look mighty spiffy and clean, especially the bed linens.

The whole reason for sending in the private, Blackwater-style team is never entirely made clear. Why would you have these guys at the ready to protect this place but leave it so unprotected that a group of hapless urban explorers enter without much resistance? Are they meant to expedite things or prevent them? For a crack assault team, they’re pretty awful at their jobs. Does every low-budget film skip researching how military units actually function and just use Jim Cameron’s Colonial Marines as a reference? Without a Bill Paxton, it just isn’t the same.

It is also unclear why the characters from the first film's events have begun to inhabit those in this one. Are they the descendants of their predecessors? It seems implied. The two women indeed resemble one another. One hopes this might be the case. Any other explanation would suggest the film’s other pairing is because they’re simply both black men.

All in all, whether titled “The Facility” or “The Rizen: Possession,” the film seems to both a sequel and a stand-alone no one really asked for.