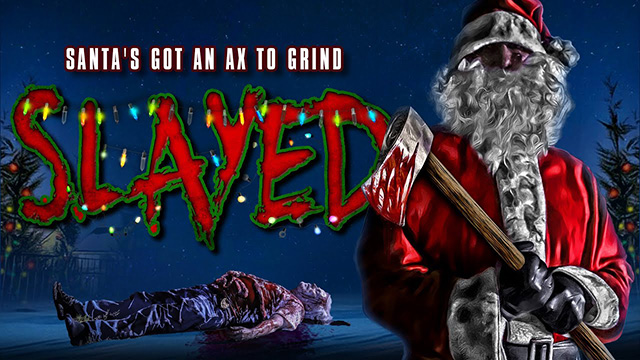 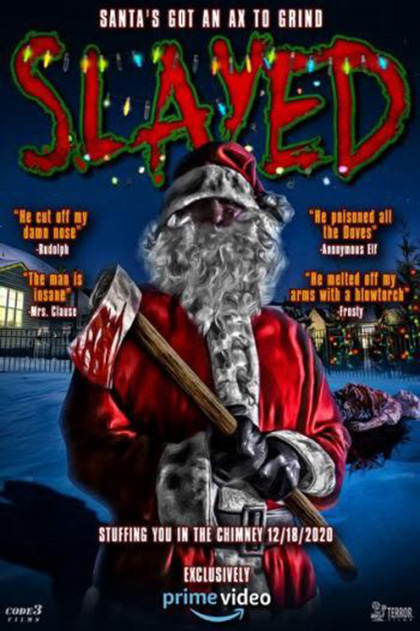 Nothing spreads joy, laughter, and good cheer like ol’ St Nick. Each year, millions of children around the world await that special day, Christmas Day, when Santa brings them presents, wrapped with care. So, why, why is it that horror films feel the need to take that jolly old elf and make him a crazed killer? Why screw with one of the happiest of happy thoughts? Because they can.

In classic slasher style, “Slayed” takes place five years after the Harris Country Massacre, where several young women were abducted and murdered on Christmas Day by a crazed Santa Claus. It’s Christmas Eve at the water treatment facility where the murders took place, and happy-go-lucky security guard/aspiring actor Jordan is spending his first night on duty. Facility manager Crandle remembers that fateful night well, and he warns Jordan that tonight is not a night to take lightly. Crandle is oh too right, as the murderous man in red has returned to the plant for another Christmas Day of terror.

For good little girls and boys who love horror, “Slayed” is the perfect present to unwrap for the holidays. Colorful, fun, and filled with great performances, snappy dialog, and–appropriate for a Christmas slasher film–some great surprises, it’s a movie that just gets better as it goes on. Sure, it’s low budget. Yes, it’s rough around the edges. But it’s also a great example of creative and talented people making the most of what they have. And with “Slayed,” that means codirectors and lead actors Jim Klock (who also wrote the screenplay) and Mike Capozzi. As Jordan and Crandle, respectively, the pair are a blast to watch on screen. Klock has a likable, everyman quality, reminiscent of a young Ed (AL Bundy) O’Neill. On the other end of the spectrum, Capozzi is a hulking growl of a fellow, pulling off that clench-jawed man-with-a-mission character that harkens back to so many genre pictures.

The whole cast is quite good, making the most of the roles, making each character distinctive and memorable. In particular, Kyra Kennedy is excellent as this year’s Xmas abductee, giving a frightened, panicked performance that’s a cut above the usual.

Filmmakers like Roger Corman mastered the art of taking basic assets and using them to the fullest. The water treatment plant setting has absolutely zip to do with Christmas, but it makes for a superb labyrinthine location. Lit with garish, bright color straight out of Mario Bava, it allows Klock and Capozzi to put together some enjoyable cat and mouse sequences. Well-paced and tightly edited, the film is never boring, and it keeps the audience on its toes. And while “Slayed” starts relatively rote, almost intentionally so, as it progresses, the treats and twists keep coming, including a truly WTF moment that will delight any slasher film fan.

Its Texas setting does make for a rather frost-free Christmas-themed movie, and the picture makes the mistake of dating itself a bit by referring to being set in the year 2019 several times. However, that does make for one of the more unintentionally humorous lines in the film. “You got plans for 2020? I don’t.” snarls Crandle. Oh, if he only knew.

“Slayed” is an oxymoron. It’s a big dumb flick that’s smart and fun. Klock and Capozzi have wrapped up a present that’s a box within a box within a box. When we get to opening that last one, there’s our cool little gift.