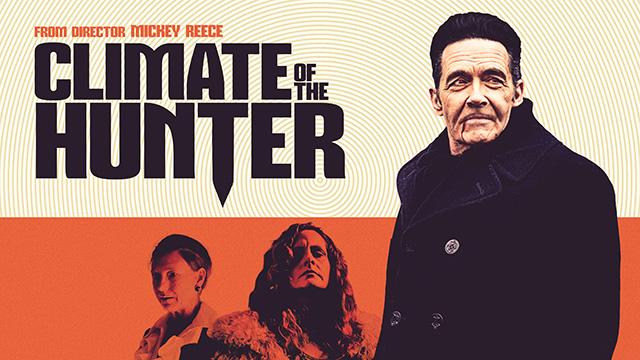 "Climate of the Hunter"
review by Diablo Joe 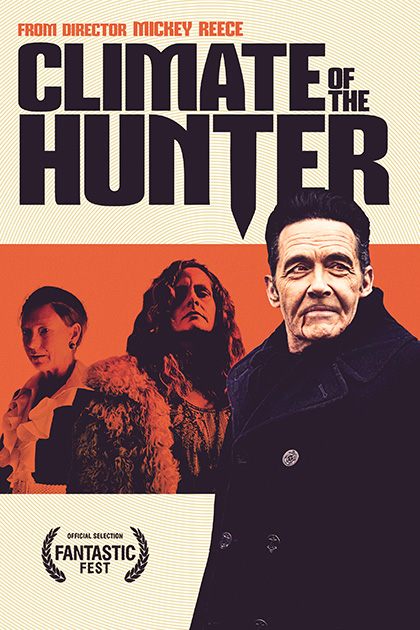 Climate of the Hunter

Mickey Reece is a highly prolific filmmaker out of Oklahoma who has averaged two features a year for quite some time now. "Climate of the Hunter" is one of the latest (with his output, can you say "latest" with any confidence?) in his oeuvre, and it's an intelligent, low-key take on the vampire concept.

Sisters Alma and Elizabeth could not be more different. Alma is a bohemian free spirit, wild and woolly, and a devourer of life. Elizabeth is a towering and commanding presence; fashion forward and all business. Together at the mountain vacation house they co-own, they eagerly welcome Wesley, an old male friend who has long fascinated the two of them. A colorful, charismatic world-traveler and writer, Wesley entrances both women, and the pair vie for his attention. But soon, Alma becomes suspicious of her former suitor's nature. As she grows wary, her sister grows closer to the man she increasingly suspects is sanguine in more than just temperament.

In a genre often dominated by twenty-something protagonists, "Climate of the Hunter" refreshingly gives us adults characters in a film driven by emotional dynamics rather than physical action. Reliance upon your cast and script in this manner means that both must be on point if your movie is to succeed. Reece is an actor's director and writer, and his dialogue (in a script written by Reece with John Selvidge) is the kind that actors savor and can grab hold of with relish. And his cast, to a one, does just that.

Ginger Gilmartin and Reece stalwart Mary Bus as Alma and Elizabeth, respectfully, delicately balance their characters' demands. Gilmartin takes the sort of role that we've often seen inhabited by a Hawn or Sarandon and gives it a fresh spin. Rather than over-play her colorful nature, she uses Alma’s darker facets to create an intriguing complexity. Likewise, Buss takes the bracingly restrained Elizabeth and slowly uncovers both her repressed loneliness and passions. Like the sisters, Wesley could easily be a caricature. Colorful and lusty, spouting poetic tales and reciting Baudelaire, it’s a role that could become too broad. Ben Hall makes him believably charismatic and sexual. At times he even echoes the great John Carradine, but without that thespian’s sepulchral trappings. Wesley is an ecstatically twisted character. If he is not an actual vampire, his hedonism is insatiable. The interplay between these three actors is joyous to experience.

The supporting cast is excellent. As Alma and Wesley's children, Danielle Evon Ploeger and Sheridan McMichael are stark contrasts to their cinematic parents. Ploeger’s Rose is deliciously luminous, a woman whose lust for life is anything but that of her flower-child mother’s. Wesley seeks to be a writer like his father but bitter over the philandering that destroyed his family. McMichael gives us an intelligent and defiant but broken young man. And, as BJ, Alma’s local-yokel confidant/drug buddy, Jacob Snovel continues the film’s defiance of easy character stereotypes.

Reece is somewhat less successful with regard to his visual sense. There are some awkward stylistic flourishes and fantasy scenes that range from the theatrical to the near ridiculous. Thankfully they are brief and few and don’t destroy the milieu. The curious choice to set the film about 1976/77 has Wesley and Elizabeth, in particular, wearing some ‘70s attire distinct enough to be distracting. Worse yet are the Betty Crocker period meals of cocktail weenies and toothpick skewered morsels the trio dine on throughout the film.