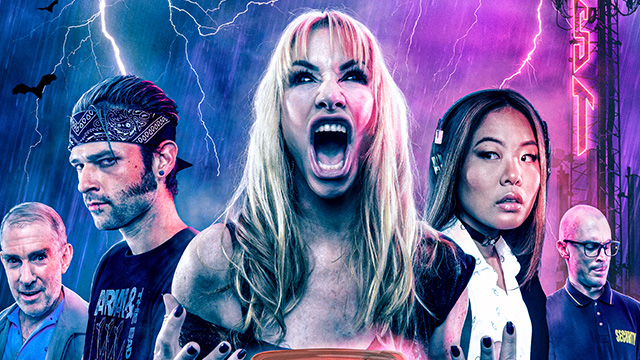 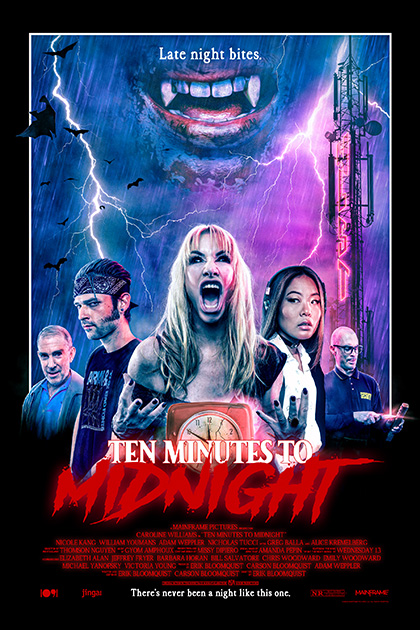 There is a deserved reverence for horror films of the ‘80s. Nightmare on Elm Street, Fight Night, Re-Animator, Night of the Creeps, and so many more hold a special place in fans' hearts. They were scary, colorful, messy, sexy, and gawdamned fun. They were also unafraid to get batshit crazy. So it’s no surprise that a lot of filmmakers try to ape that vibe, but it’s also no surprise that many, if not most, fail. It’s hard to catch that lightning in a bottle. Because, more than anything else, those films were entertainingly well-made as hell. I doubt that the filmmakers behind “Ten Minutes to Midnight” ever stated that they were making an ‘80s-style horror flick. But dammit, Tom Atkins, it sure thrills like one!

It’s a dark and stormy night. And it’s the last night on the air after 30 years for rock-jock Amy Marlowe. Only she doesn’t know it. Making matters worse, SOMETHING bit her on the way to the station. As a result, Amy deals with the news of her replacement with a bit more, um, emotion than usual. And the ten minutes leading to midnight could be the last ones for everyone on staff at the station.

“Ten Minutes to Midnight” is, to put it bluntly, a blast. As Amy, Scream Queen Goddess Caroline Williams returns to the DJ desk some 34 years after her classic spin as TCM2’s iconic Stretch Brock and is every inch the badass rock star her role needs. She’s feisty, fearsome, vulnerable, vixenish, and vicious. It’s great to see her star in a picture this enjoyable and this willing to let this Lone Star lady take the lead. She’s the cherry on top of a terrifically entertaining cast who give their all for this film.

“Ten Minutes” benefits from really being an ensemble piece. Besides Williams’s beast of a presence, the four other key actors bring just as much to their roles. And then some. Nicole Kang is fantastic as Amy’s young replacement and recipient of much of the departing DJ’s rage. William Youmans so well embodies Amy’s lasciviously slimy boss that it’s a wonder the actor didn’t have to report to HR after the film wrapped. As Amy’s admiring and sympathetic engineer, Aaron, Adam Weppler is just perfect–a mix of sweet sentiment and tattooed edge. Rounding out everything is Nicolas Tucci, who’s wide-eyed, eager, and flat-out weird station security guard Ernie is one of the film’s highlights. And when a bizarre turn in the film’s course requires everyone to pull overtime in their roles, not a single performer fails to satisfy.

As good as the cast is, the direction by Erik Bloomquist, working from an inventive script from him and Carson Bloomquist, takes all of the elements of the film (which, without spoiling things, are many and varied) and keeps them both cohesive and wild without ever being excessive. And “Ten Minutes,” with its scenes of feverish hallucinatory scenes, could easily have come across as ridiculously odd as Monty Python’s “Fishy-Fishy” interlude in “Meaning of Life.” Instead, Bloomquist keeps it a bit low-key, only enhancing just how truly fucking bizarre what we’re watching is. His work in less outrageous portions of the film allows for pathos and empathy with William’s Amy, a woman who has given all to her job but has always seen her end coming.

“Ten Minutes to Midnight” is a film that offers so much to its horror audience. It’s great-looking, briskly-paced, ooey and gooey, and delightfully screwed up. Caroline Williams and her co-actors give everything they’ve got, and we lap it up with glee and enthusiasm. It succeeds because–above all those incredibly bonkers elements–it’s just an enjoyable, well-made movie.