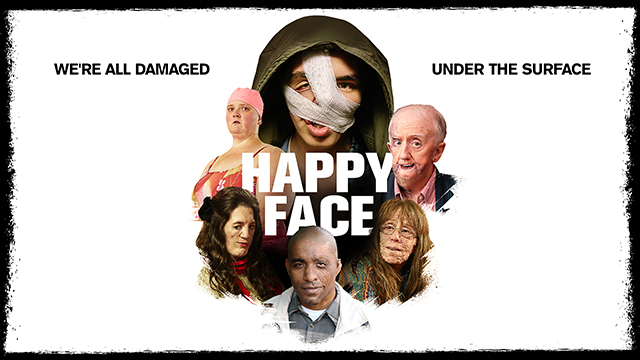 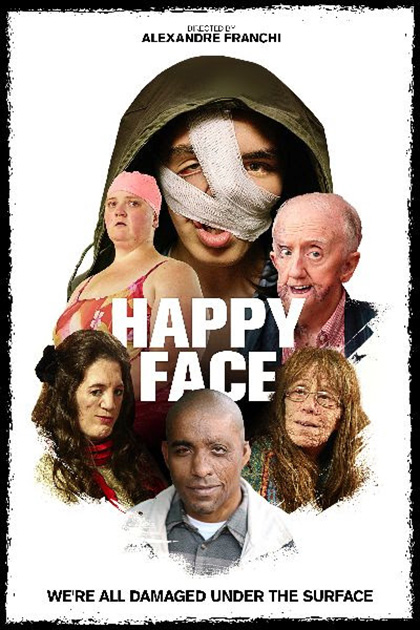 Let’s be clear, do not expect “Happy Face,” from Quebecois director Alexandre Franchi and co-writer Joelle Bourjolly, to be a horror film. It’s not. It doesn’t have any supernatural elements, though it does possess a unique magic of its own creation. And there are monsters. But they are you, me, and most everyone else in how we sometimes treat one another.

“Happy Face” is the story of Stan, a young man struggling with the heartbreaking decline of his mother due to cancer. Seeking to manage, he finds himself befriending the members of a therapy group for those coping with physical disfigurement. At first, attempting to disguise himself as one of them, the charismatic and handsome Stan seeks to break them out of the social prisons built around them by public cruelty and their personal demons.

As stated above, “Happy Face” is not a horror film. What it is is a tremendous showcase for its cast. Robin L’Homeau leads the cast as Stan, and his presence gives the film its positive, upbeat arc, even through its darkest points. He is earnest and filled with enthusiastic joie de vivre. The Dungeons and Dragons-loving Stan is a romantic in the truest sense of the word. But like heroes of legend, he is fatally flawed, and L’Homeau never lets us forget Stan’s tragedy. As the group’s counselor, Debbie Lynch-White’s Vanessa means well, attempting to uplift and heal others. But her own body issues as a plus-size woman are self-crippling, and Lynch-White successfully navigates a roll that could easily have devolved into abject pathos.

But it is the rest of the cast who give “Happy Face” its real magic. Composed partially of non-actors, they are all persons with real-life disfigurements. And, to a one, they are heartbreaking, inspiring, hilarious, and genuine. E.R. Ruiz’s Jocko blames a severe burn incident for robbing him of the life, and the woman, he once had. Buck, a woman suffering from neurofibromatosis who has spent her life seeking validation and love from her mother. Cyndy Nicholsen plays her with heartbreaking sorrow.

But the two standouts among this already impressive company are David Roche as Otis and Alison Midstokke as Maggie. Otis, the oldest of the group, is plagued by severe facial disfigurement and estrangement from his family. He covers the pain through a combination of self-deprecation and flirtatious swagger. Roche, a real-life motivational speaker, allows us to fall in love with Otis, even as the film reveals shortcomings far deeper than just skin. Midstokke, whose face is drawn down from the effects of Treacher Collins syndrome, dreams of being a fashion model (the actor’s real-life second career). She plays Maggie as absolutely breathtakingly defiant, affecting, and touching. It is an extraordinary tour de force performance.

But these great actors would be squandered if director Alexandre Franchi and co-writer Joelle Bourjolly had not provided such great characters and a brilliant story with which to work. Each character develops along their own arc. Each one has a heroic journey upon which to embark. Some succeed in their quests, and some fail. None gets a pass for their sins and shortcomings. It is epic storytelling masterfully made intimate, personal, and poignant.
“Happy Face” is a remarkable film. is unlike most any movie you’ll see, possibly ever. Its cast is so unique, but the story it tells of confronting both your fears and the world is at once rarified and universal. It may not be the quest you expect, but rest assured your cinematic voyage will be a grand one.

This reviewer gives “Happy Face” 5 out of 5 imps.