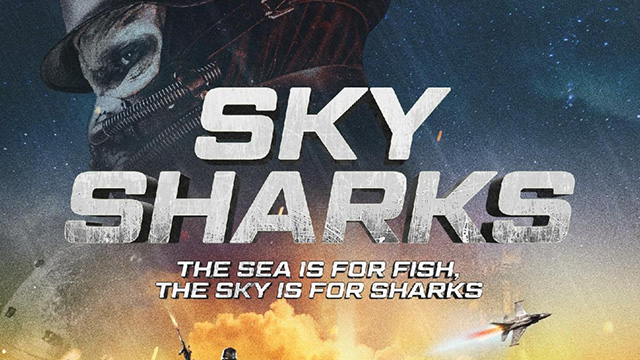 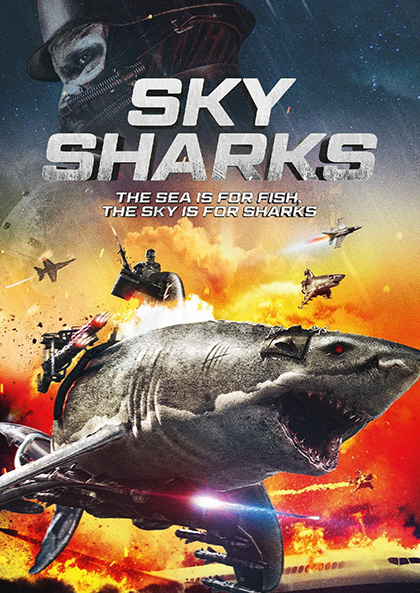 “Sky Sharks” opens with possibly one of the most incredible and batshit crazy scenes in cinema history. It’s hard to argue with 12 minutes of the hellishly insane spectacle of a jet airliner being overtaken and boarded by a squadron of flying great white sharks, flown through the cloud by savagely murderous female Nazi zombies. The film moves to the Arctic to introduce our heroes, Eva und Angelique, two scientist/ass-kicking sisters, and their father, the aged and scared genius, Dr. Klaus Richter. The film continues its exercise in gaudy excess as sex, and gratuitous T&A get tossed into the mix, along with a Big-Gulp-sized serving of gory mayhem. The first 25 minutes of “Sky Sharks” hold the promise of a check-your-brain-at-the-door mashup of “Jaws,” Dead Snow,” and “Heavy Metal: the Movie.”

So it comes as a complete buzzkill that the film wastes the next full 25 on a needlessly elaborate and talky WW2 expository flashback that, while it establishes the origin of our toothy flying fish, could have been far briefer. Such as a few lines of dialog brief. But then newscasts from around the world bring word of Nazi beasts wreaking havoc from above upon some of the world’s greatest cities, throwing the film back into action for… about a minute. Our heroes and the world's leaders respond with nearly 20 minutes of talking heads and other non-thrilling events.

After a glut of “Sharknado” films, to go into a movie with the title “Sky Sharks” set up the expectation of a similarly corny, campy, and stupid waste of time. So when it hits you in the face, gut, and groin with its over-the-top opening salvo, it’s crushing to have it peter out into talky, drawn-out dullness for nearly the entirety of the next hour. The picture picks up briefly as the sharks, once again, take down another airliner, only to then devolve once more into flashback, this one set in zombie-laden Viet Nam. And its tepid, flaccid conclusion squanders any and all of “Sky Sharks” promise.

“Sky Sharks” is a lot like having the hottest person you’ve ever seen flirt seductively with you at the bar, proceed to wear you out with mundane chatter, tease you by inviting you back to their place for sex, only to end the evening with an oboe recital.

There is a lot of talent behind “Sky Sharks.” A LOT. It looks amazing, with fantastic, stylized CGI, impressive gore and makeup effects (Tom Savini is listed as make-up supervisor, and the old-age work on Dr. Richter is near Oscar-worthy), and incredible production design. The cameos are mind-boggling. Everyone from Tony Todd, Amanda Bearse, Naomi Grossman, early Romero film mainstay Lynn Lowry, Japanese exploitation star Asami, “Walking Dead’s” Travis Love, and somewhere, supposedly, horror director Mick Garris. Many get minutes of screen time each, part of “Sky Shark’s” enormous bloat of tediousness. Yes, it’s great to see some of these faces, but they’re almost exclusively in an endless series of video phone calls, just talking. And talking.

It may seem a bit disingenuous to pick a nit on the topic of taste and propriety on “Shy Sharks.” But in these times, to make one of your heroes a former, even if supposedly repentant, Nazi officer is a bit of a dodgy decision. The film makes a passing reference to Werner Von Braun, and the revelation receives shock and dismay from a few characters, but otherwise, it’s a topic quickly marginalized. On a separate front, the film’s sex and nudity come exclusively at the expense of throwaway (in one case, literally) female characters. The film’s heroines hardly make up for the humiliation and violence it heaps on these women. Both of these are topics that many might find tone-deaf in 2021.

No one expects, or, perhaps, even asks for, a cohesive, logical story from a film like this. Part of the enjoyment of movies like this is the bizarro, tawdry, go-for-broke excess gleefully splashed across the screen. But “Sky Sharks” squanders its brilliantly mad first quarter and never recovers. The thrilling peaks can’t justify the film’s painfully dull valleys. Yes, it’s is superbly designed, and when it gets going, maniacally delightful. But once it gets going, it just flat out fails to keep it up.