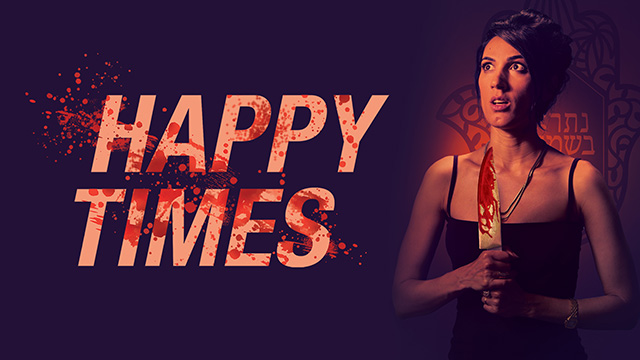 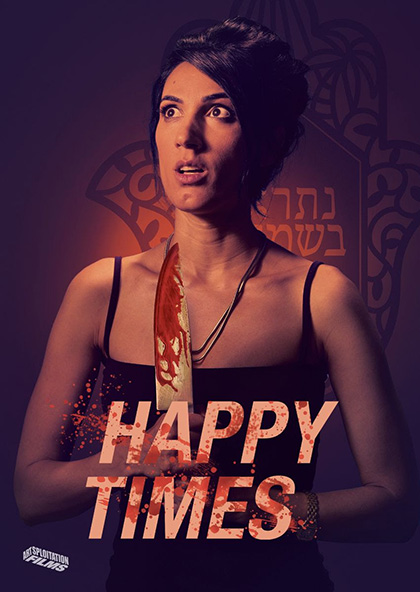 It starts simply. An enjoyable seder at the wealthy LA home of Yossi and Sigal, their guests made up mostly of fellow Israeli expatriate friends and family. But as the evening progresses, tensions and passions flare. Insults and outbursts soon deteriorate into an uproar, and the evening spirals deeper and deeper into ferocious bedlam. The celebratory evening becomes one of pandemonium and chaos.

“Happy Times,” as a basic concept, is hardly original. Members of the privileged “upper class” stripped of their refined veneer to expose their petty core is not a new theme. But “Happy Times” firmly stakes its claim with dark humor and glee. And its Israeli-Jewish point of view is refreshing. An excellent cast, witty dialog, and overall brisk direction combine to make it a gruesome joy to experience.

As the night goes on, the tensions between these disparate, fragile, high-strung characters tightens and tightens. When it snaps, the film cascades into escalating scenes of violence. Fisticuffs, freak accidents, and mayhem become increasingly over-the-top and darkly comic. The family in “Happy Times” may start as an Israeli version of “Knives Out’s” smugly wealthy Thrombys, but they devolve into “Ready or Not’s” Le Domases. All the while, they futilely struggle to maintain decorum and face.

Director Michael Mayer and co-writer Guy Ayal use their film to make pointed critical commentary on elitism and prejudices espoused by some Israelis. An immigrant herself, Sigal nonetheless treats her Latin housekeeper with the same disdain of any American of her standing. Her cousin Michael’s girlfriend, who is African, receives a friendly, but condescending, welcome. A variety of Jewish domestic politics and expectations are raked over the coals. It’s a raw demonstration of how people and cultures can be as polarized as seemingly unified. The dialogue is a code-switched mix of Hebrew and English. It’s a decision that serves the film well.

Mayer’s cast is excellent. In particular, Liraz Charmami as Sigal is terrific. This is her house, her party, her evening. And no amount of broken glass, clogged toilets, blood, or bodies are going to stop her from holding her head high and proud. As Sigal’s actor-cousin, Michael Aloni gives us a cocky, irreverent performance. Both appealing and abrasive, it’s a great character. Also worth noting are solid performances from Iris Bahr as Hila and Ido Mohr as the brutish Yossi. And Mike Burstyn’s brief turn as Rabbi Matti is a comedic interlude with a gleefully tasteless twist.

The film works best in its first half, as we meet our characters, and their individual petty qualities reveal bit by bit. They’re fun to watch as they leap from topic to topic, each with an opinion, clutched closely with white-knuckled fists, to share. As the events of the night unravel, so does the script and direction. Plot points become harder to follow, and motivational logic weakens. In particular, Alon Pdut’s Avner’s character arc becomes both a bit sloppy and lacking in plausibility. The editing and pacing are less confident and decisive. But we’re still caught up in the flow of everything, despite the hiccups.

“Happy Times” could easily get lost in the spate of “ugly rich people” films that have recently dotted the cinematic landscape. Its Israeli perspective keeps it unique and exciting. Its cast keeps us engaged. It’s an enjoyably mean-spirited example that, Rabbi Matti’s claim to the contrary, at the end of the day, not ALL Israelis are friends.

Happy Times from Artsploitation on Vimeo.

When you have an Ad group that has hundreds of different keywords, trying to manage all the match types, bidding strategies, and targeting can be an overwhelming task. Thankfully, there’s a way to combat this situation – it’s known as the SKAG approach, which stands for Single Keyword Per Ad Group.

This makes it easier to control your Ad groups and your budget. However, the SKAG approach is not without its problems. In this article, we’ll explore the SKAG approach in great detail, giving you all you need to know about it so you can use it in the right way to improve your pay-per-click (PPC) advertising efforts.
https://ppcexpo.com/blog/single-keyword-ad-groups