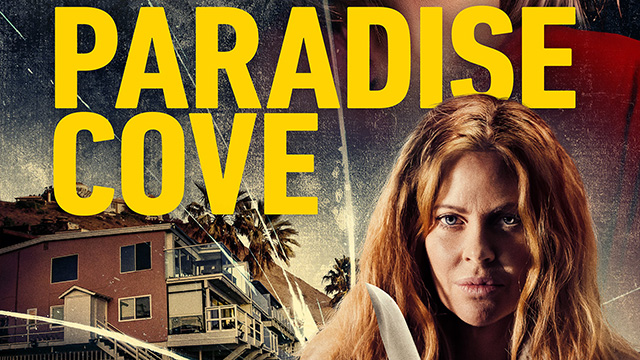 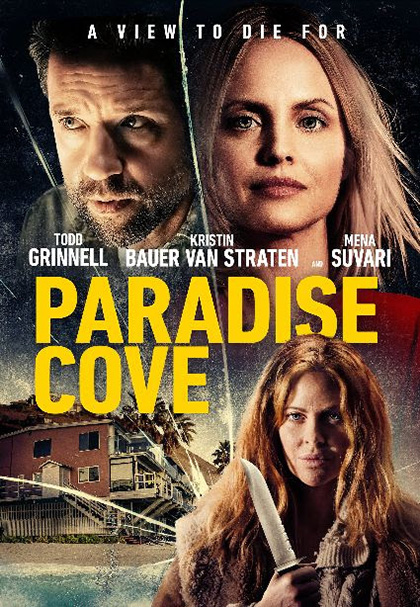 Thrillers like “Paradise Cove” really want to deliver the goods. You get the sense that the filmmakers weren’t lazy or attempting to take advantage of their audience by cranking out something rote and unoriginal. It’s pretty apparent that Martin Guigul and screenwriter Sherry Klein have the viewers' best intentions at heart, but a combination of budgetary issues and less-than-ideal ability hamstring a film that is, at least in basic concept, relatively fresh and original.

Knox (Todd Grinnell) and Tracey (Mena Suvari) move into the Malibu bungalow he has recently inherited. Knox’s mother died in a fire that damaged the property, and the pair, who flip houses for a living, look to renovating the property as a way to secure their future and that of the child they are actively attempting to conceive. But the pair discover that there is someone else with interest in the home. Homeless squatter Bree (Kristin Bauer van Straten) lives beneath the home’s pilings. And Bree claims that Knox’s mother swindled the house away from her. It’s hers, she claims, and she wants it back. And she wants retribution for the tragedy she has felt since its loss.

“Paradise Cove” begins decently, if rather blandly, enough. Knox and Tracey grapple with a combination of homeowner woes only magnified by Bree’s presence and interference. Bree sneaks through the home like a rat; only she is the one leaving poison. She makes Paradise more like Hell. But the film’s machinations quickly devolve into ever more ridiculous and dubious logic, with situations that test even the most lenient viewer’s ability to suspend disbelief. Los Angeles is a city that has always loved its eccentrics, and Bree is well known to all in the area. The way the film pits the locals on her side in almost every situation is just too much. L.A. may tolerate and even celebrate its characters, but never to this degree. And plot contrivances, from obtuse city regulations to pregnancy tests, abound with far too much frequency.

For a film set in Malibu, “Paradise Cove” strangely takes little advantage of the area’s beauty and scenic expanse. The film feels claustrophobic and not in a beneficial way. Almost all the action and scenes occur in a tiny handful of tightly shot locales within the property–the stairs leading up from the beach, one or two rooms within the house, and Bree’s encampment beneath the structure. One suspects the filmmakers didn’t have full access to a real Malibu location, but it would have been nice to get some more variety in the film’s shots and a better sense of the house overall. The result is just uninspired and unexciting.

As Knox, Todd Grinnell brings a rugged machismo to a role that isn’t too forgiving. As the film progresses, Knox is not the most sympathetic of main characters, but Grinnell does what he can. Mena Suvari, who was terrific in the recent “What Lies Below,” is mostly wasted as Tracey. It’s a thankless role that requires not much more of the actor than crying and looking forlorn.

If there is any reason to watch “Paradise Cove,” it is Kristin Bauer van Straten. So deliciously fun as “True Blood’s” Pam, van Straten brings the same sexual zest and enjoyable fire to Bree. At first, the viewer might question her casting. But once the film reveals that Bree to be former model, we see she’s a perfect choice. Despite all her ordeals, Bree has steadfastly maintained a dogged air of glamour and beauty. Van Straten elevates every scene she’s in, and “Paradise Cove” wisely makes as much use of her as it can.

Though a well-intentioned effort, “Paradise Cove” doesn’t quite score enough to make it a recommendation. The exception is the caveat that if you are a van of van Straten, she almost makes the film worth watching for her and her alone.

Hi, my name is parul Sharma and I am a jaw-droppingly exquisite and capable woman. A great 21-year-old self-sufficient call young woman and a sweet and humble brunette whore with the cutest face ever and a smooth body. http://www.lucknowescorts.co.in/