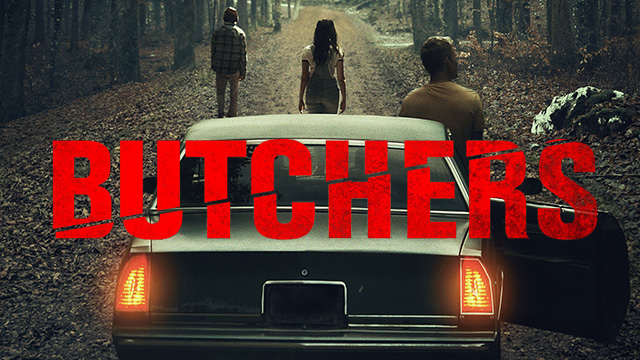 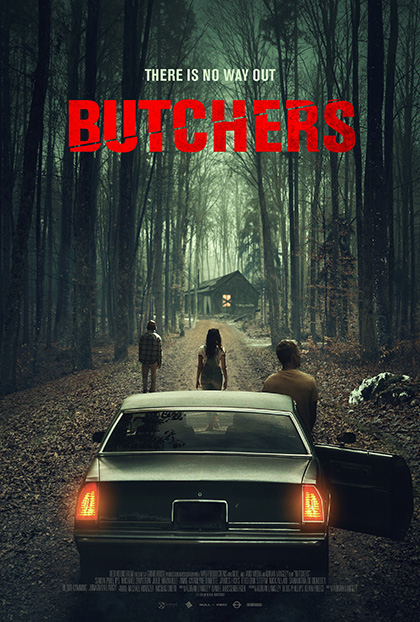 In the sub-genre of backwoods crazies terrorizing young people for fun and deviance, the usual trend is to go as extreme as you can. While there certainly is something to be said for that visceral cinematic experience, as the sole manner in which to stake your cinematic territory, you better best everything that comes before. “Butchers” goes a different route. While not a film that particularly pulls its punches tempers them with some welcome, subtle touches that set it apart from the pack.

Owen (Simon Phillips) and Oswald (Michael Swatton) are the butchers of the title. The two brothers live out in the country, entertaining themselves by capturing, torturing, and killing woebegone passers-by. Sometimes they keep them alive for entertainment. In the case of poor Celeste, pregnant with Oswald’s child (or maybe Owen’s), that means more carnal purposes. The rest get chopped up and fed to their cannibalistic brother, “Ox,” who is more beast than man and kept at bay behind closed doors. Having buried their mother over the winter, Owen and Oswald now squabble over dominance, with Owen’s sharp intellect usually trumping the hulking Oswald’s simpler, more childlike emotional impulsiveness. Descending upon four kids traveling through their way the Watson boys find themselves, as the first of three chapter cards indicate, at “The Beginning of the End.”

Director Adrian Langley and cowriter Daniel Weissenberger have crafted a nasty but smart story here. “Butchers” is shrewd in its choice of this specific turning point in the brother’s lives as its focus. It gives the film much more purpose than just another kids-in-rural-peril story. And they’ve gone to the trouble to develop both their protagonists with equal interest as they have their antagonists. The lead female characters, Jenna (Julie Mainville) and Taylor (Anne-Carolyn Binette), along with the unfortunate Celeste (Samantha Jo Benedet), are as crucial to the story as the Watson boys. Langley and Weissenberger treat these characters with respect, even as the brothers do not.

The cast is universally strong. There’s nary a false note to any performance. Phillips is menacing, cunning, and thoroughly reprehensible. His calm demeanor and confident, cerebral manner make him all the more menacing. Swatton’s Oswald is a complex man-child of a character. Smarter than he seems, only less able to balance his emotions and his intellect, he’s far more realistic than just some simpleton. It’s a brilliant performance. Mainville stands out amongst the younger portion of the cast. She gives Jenna the savvy, defiant grit that makes her quite the match for the brothers.

It’s interesting to note that Philips, Swatton, De Benedet, and Frederick Storm (who portrays Christopher in “Butchers”) were all members of the cast of 2019’s crazed Santa slasher “The Nights Before Christmas.” And Langley’s other directorial credits are heavy on the Xmas TV-movie side of things (not unlike the filmmakers of “Anything For Jackson”). What is it about the most wonderful time of the year that makes it such the stocking-stuffer for horror fans?

“Butchers” is beautifully shot, filled with atmosphere and dread. Its cast help to give it a grounding lacking in many films of its ilk. The film brings a nasty attitude to the proceedings without ever going needlessly over the top. Some horror fans might wish it went further, but then there are other films to satisfy that hunger. For anyone who would like to see an intelligently conceived break from the usual pace of rural family menace horror, “Butchers” tastily makes the cut.

This devil of a reviewer gives “Butchers” 4 out of 5 imps.