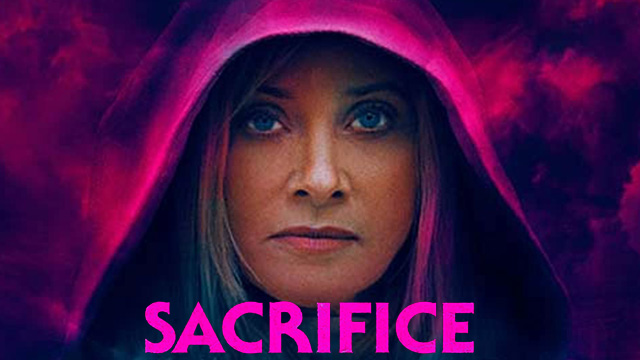 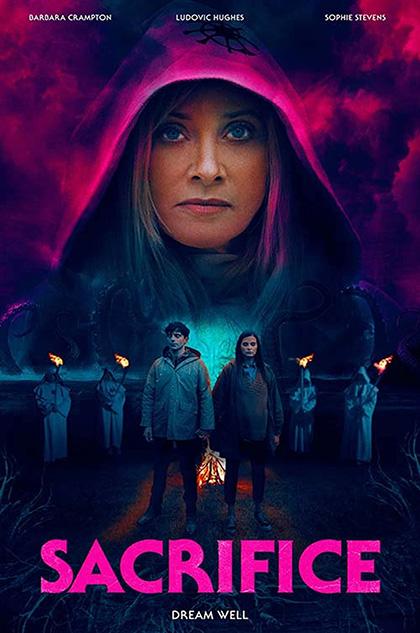 Barbara Crampton will always be a treasured part of the Lovecraftian cinematic universe. Her work in the seminal “Re-Animator” and “From Beyond” firmly cemented her as one of our most iconic scream queens. Her versatility, intelligence, and seemingly ageless looks have enabled her to play everything from the victim to the femme fatale to the scientist. Crampton’s horror CV may not have been as extensive in her earlier days as some of her peers, but she has been more than making up for it the past few years. ”Sacrifice” not only adds to that resume, but it may also be one of her best roles to date, as well as a nice addition to the Lovecraft-inspired canon.

Emma (Sophie Stevens) and Isaac (Ludovic Hughes) are a young couple, soon to welcome into the world their first child. The pair to the small Finnish fishing island where, as a child, Isaac’s mother fled to the States with him in tow. Though at first shunned by the locals, once Isaac reveals his ties to the island, they quickly welcome him as their brethren. When island police chief Renate (Crampton) informs him that the reason his mother fled with him was to escape having murdered his father, Isaac is conflicted. He is drawn deeper and deeper to his roots on the island and its ages-old rituals and folk beliefs with each passing day. Meanwhile, expectant mother Emma, besieged by surreal nightmares, becomes ever more alienated and unwelcome.

Based on a short story by British author Paul Kane, inspired by H. P. Lovecraft’s mythos, and with a script by Toor Mian (who co-directed with Andy Collier), “Sacrifice” maintains an eerie, unsettling vibe throughout. Isaac struggles with his identity, and more and more, his sanity. Is he reconnecting with a void left by a father he never really knew? Or is there some force drawing him in deeper? Are Emma’s fish-out-of-water feelings (forgive the pun) and hallucinatory dreams the product of late-term-pregnancy biology, or is there a darker culprit? Collier and Mian leave much of that up to interpretation. Despite some overt references, “Sacrifice” is the very definition of “Lovecraftian.” It will have its detractors who may feel it doesn’t go far enough or simply isn’t the Lovecraft film of their dreams, but those are probably folks who will seldom be pleased with most attempts at the mythos. Lovecraft has always toyed with ambiguity, and the filmmakers use this to suit their ends.

While casual observers might accuse “Sacrifice” of cashing in on “Midsommer,” it owes much more to “The Wicker Man” and pays heavy homage to that folk-horror classic. Certainly, Crampton’s character, Renate, as both representative of the island’s secular and spiritual authority, is very much this movie’s Lord Summerisle. Crampton adopts an antiquated Old Finnish accent that sets her character apart from even the other locals. It’s a wonderfully understated and measured performance in a role that might have easily, with a few adjustments, been given to one of her male acting peers. It’s to the film’s benefit that Mian and Collier chose her instead. Both Stevens and Hughes tackle their roles with believability. The pair could have veered into parody or caricature, but, smartly, they too play their characters closer to the vest.

“Sacrifice” is not without its problems. The ending is a bit underwhelming, and its small fishing island sometimes seems a bit too small and underpopulated. Is it the Lovecraft film we have all been seeking? No, but it never tries to be. It succeeds at what it sets out to do. “Sacrifice” mixes some quite good performances, especially from Crampton, with cleverly surreal imagery and a quiet, unsettling tone that makes it more than worth the viewer’s while.