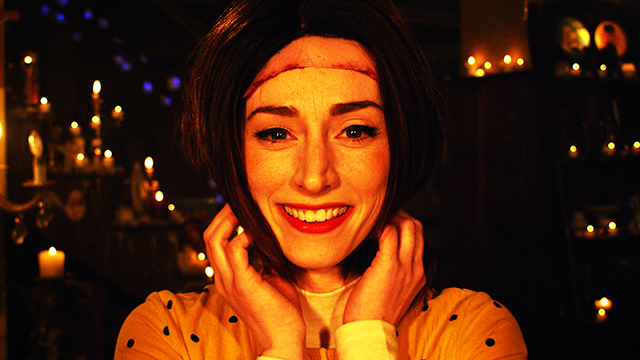 "The Stylist"
review by Diablo Joe 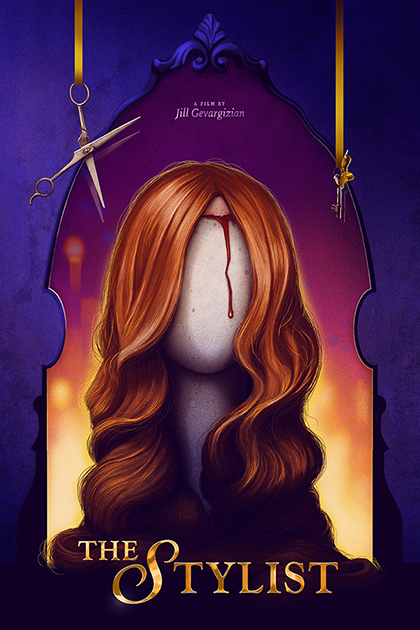 The debut feature from director Jill Gevargizian follows several shorts and a contribution to an anthology feature of the nascent version of “The Stylist.” That short film, under the same name, starred Najarra Townsend as Claire, a young and seemingly pleasant hairstylist who drugs one of her late evening clients and removes her hair, and more, to add to her collection of scalp/wigs. It’s a delightfully darkly humorous piece, perfect in tone and presentation. “The Stylist” opens with a similar scene but proceeds to then develop Claire’s character and story. Townsend returns in the role to give us one of the more unique and empathetically charismatic serial killers in recent memory.

Claire is a quiet iconoclast, living alone with her small dog. She is an unobtrusive but well-liked part of her community, going about her daily existence. No one would ever suspect that this meek stylist finds solace by fantasizing of the lives of transient, one-off clients while she dons their hair. When Oliva, one of her best and favorite regulars, begs her to do her wedding hair. It’s a break from Claire’s carefully maintained routine that reveals to her a world she may never be a part of, except, perhaps, in her darkest fantasies.

Gevargizian has paired a complex, compelling female character with a terrific story and devilishly black-comedy sensibility. “The Stylist” expands on the earlier short to the point where that film is merely an introduction to Claire’s pathology. The director and her lead actor expand Claire into a full and rich character, filled with vulnerabilities and oddball quirks. Unlike some other women filmmakers such as the Soska Sisters, Gevargizian’s sensibility is less attuned to an exploitation aesthetic. This allows “The Stylist” to give us some fun contrast between its quaint domesticity and bloodshed. The film is a decidedly feminine perspective on horror (though Gevargizian shares co-writing credits with Eric Havens and Eric Stolze). Men are almost completely out of the picture, literally, for most of the movie. What remains, as a result, is the relationship between Claire and Olivia. In her own, less twisted way, the latter is as equally insecure as her hairdresser friend. It’s a wonderful crux to hang the story on.

Najarra Townsend, familiar to horror fans from 2013’s “Contracted,” is simply amazing as Claire. Claire is a woman who is fully aware of what she is. She has structured her world to allow for her darker nature. She is discreet, methodical, and otherwise completely ordinary to the point of being unremarkable, even with her striking red hair. Townsend’s performance is a marvel of measure and subtlety. Townsend is aptly aided by her costar Brea Grant. In any other film, Olivia would probably become a completely unlikeable character, spoiled and vain, but “the Stylist” smartly plays against expectations. She is lovely, popular, and everything Claire aspires to be, but Olivia knows that her life is still lacking. She seeks as much from Claire as Claire seeks from her fantasies. Grant (who also wrote and directed the terrific 2020 film “12 Hour Shift”) is equally on par with Townsend in carrying and elevating the movie.

Gevargizian’s direction is brisk, engaging, and, dare one say, stylish. Her camera moves with confidence and purpose. There are some great split-screen sequences at the beginning of the film that is echoed in later compositions. This is a film made with purpose and a self-assured voice. Nothing about it ever rings false or strikes the audience as forced, and it’s a film that needs that unaffected quality to work at the level that it does. The director isn’t afraid to let her collaborators shine, from her actors, to her co-writers, to cinematographer Robert Patrick Stern, who bathes “The Stylist” in warm, rich color, and composer Nicholas Elert, whose music is virtually omnipresent. Gevargizian also genuinely understands horror (as do her leads). When that need comes, the film doesn’t flinch or falter in any way. Gevargizian gives horror fans what they desire but in a genuinely well-crafted package.

“The Stylist” is a welcome, very original addition to the serial killer horror canon. And Jill Gevargizian is an extremely exciting talent who will hopefully continue to produce more films this enjoyable and smartly made.

There was once a blind man who had so fine a sense of touch that, when any animal was put into his hands, he could tell what it was merely by the feel of it. One day the cub of a wolf was put into his hands, and he was asked what it was. He felt it for some time, and then said, "Indeed, I am not sure whether it is a wolf's cub or a fox's: but this I know -- it would never do to trust it in a sheepfold."
<a href="https://www.primeporndirectory.com/lesbianpornvideos">free lesbian porn</a>

There was once a blind man who had so fine a sense of touch that, when any animal was put into his hands, he could tell what it was
https://www.primeporndirectory.com/