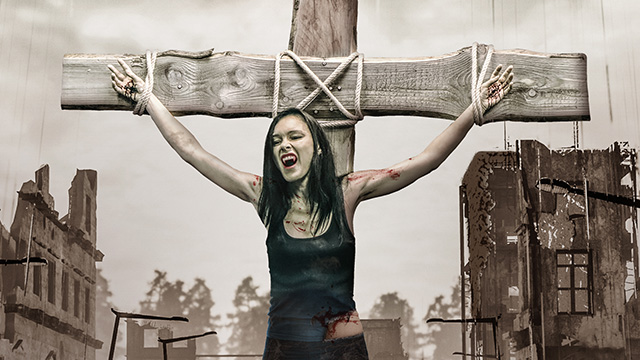 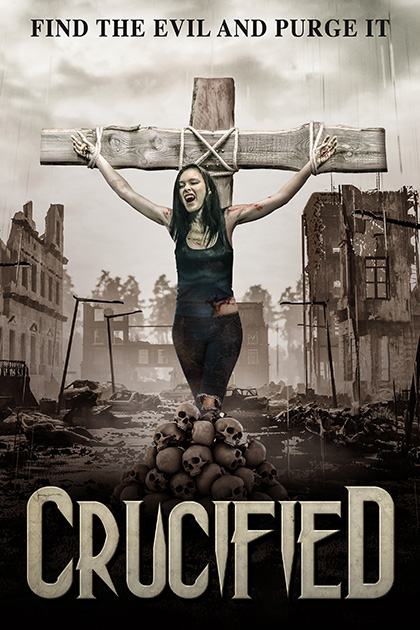 Italian fantastic horror has long been celebrated despite some of the more classic examples of the genre exhibiting a rather tenuous tie to linear storytelling and sometimes even logic. The sheer creativity and style, particularly when it comes to visuals and sheer visceral impact, have made some of horror’s most memorable and beloved pictures.

“Crucified,” also known, in classic Italian-import fashion, by the alternative title “Everybody’s End,” might seem, on cast pedigree alone, to have the potential to give an audience a memorable taste of those classics. Actor Giovanni Lombardo Radice is familiar to fans from such classics as “City of the Living Dead” and “Cannibal Ferox” (under his pseudonym John Morghen), as well as 2009’s excellent “House of Flesh Mannequins.” Marina Loi had a minor role in “Demons 2” and had a meatier (especially her legs) one in “Zombie 3.” But “Crucified’s” most familiar face would be that of Cinzia Monreale, best known as the blind, hauntingly beautiful Emily in Lucio Fulci’s iconic “The Beyond.”

The film opens on a dark 19th century night, as a woman is brutally dispatched with an iron spike by a scar-faced assassin. Flash forward to sometime not far from today, and a world torn asunder. A mysterious plague has devastated civilization. Buildings lay in ruin, and bands of militant Exterminators roam the streets, seeking out their prey and executing them in ritualistic fashion. In a secluded building, a man named Steiner pores over ancient arcane texts that may hold the key to the pestilence that has shattered everything in just a fortnight. After his assistant's death at the Exterminators' hands, three women find their way to his bunker, seemingly in search of sanctuary. But can any of them trust the other as they attempt to survive?

While that description might make for a dramatic concept—and indeed, “Crucified” starts on arresting footing—what follows over the course of the film is anything but that. Even at a scant 72 minutes, “Crucified” spends far too much time giving far too little. Repetitious shots of destroyed buildings only allow us more chances to examine the lazy special effects (and ponder just how all this could happen in a month due to “a virus”). Director Claudio Lattanzi is credited as having helmed 2009’s “Killing Birds” (also known as “Zombie 5: Killing Birds”). That credit has been much in dispute, with one source claiming that Lattanzi lacked utterly the ability to direct a film. Some watching “Crucified” may agree with that sentiment. It is an exercise in muddled storytelling and flaccid dynamics.

Not helping matters is the script by Lattanzi and Antonio Tentori, the latter responsible for the screenplays to the awful “Frankenstein 2000” and Dario Argento’s dreadful “Dracula 3D.” That “Crucified” manages to be as bad as it is while lacking a number in its title is one of the few surprises the film has in store. Characters reveal their secrets and real intent solely for the benefit of trying to shock the audience with bombshells that have as much impact as a Snap ‘n’ Pop. They string each other (and the audience) along in service of the story, never taking advantage of situations that should be to their benefit. Ridiculous displays of abilities come out of nowhere, and instances abound of characters menacing with a bluster of bravado while everyone else simply stands around.

“Crucified” is simply an exercise in stupidity. It is most successful in goading in its first ten or so minutes its audience into thinking that there might be something of interest ahead. That it rooks us so wholly is an affront to any horror film lover.