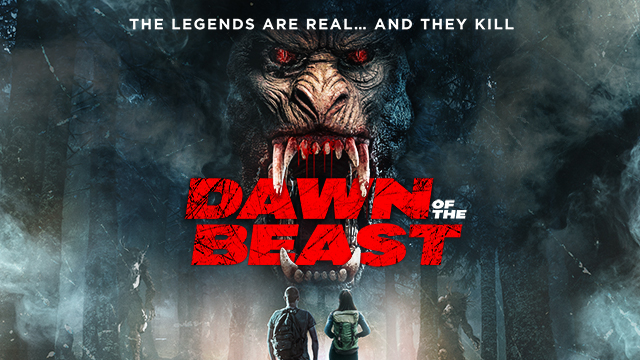 "Dawn of the Beast"
review by Diablo Joe 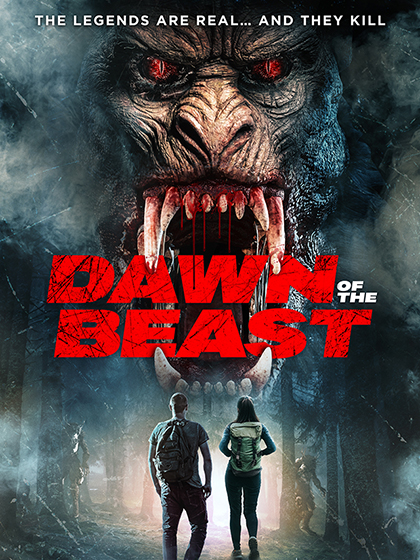 Dawn of the Beast

Director Bruce Wemple first came to most people’s attention via 2020’s Bigfoot film, “Monstrous.” He followed that up with “Retreat,” a film that posited the legendary Wendigo as its supernatural terror. Not a fellow to rest on his cryptids, Wemple has brought us yet another movie, “Dawn of the Beast,” that joins both of those beasties into one package, with a bit of demonic possession thrown in for good measure.

The film opens with a description of “The Dead Month” each September when Bigfoot sightings occur along with unexplained disappearances. We’re introduced to Everett and his girlfriend, as well as a jeweled pendant the pair have just “acquired.” Things go awry, and Everett’s lady is pulled deep into the forest by an unseen entity. Ten years later, a group of young cryptozoologists, led by their professor, enters the woods during “Dead Month” in search of the elusive beast. As they soon realize, there’s more in the wild than just a Squatch. And it’s much more deadly.

While “Monstrous” received quite a bit of praise, it also received criticism for favoring its character arc at the expense of its Bigfoot elements. Similarly, “Retreat” focuses on its lead character’s descent into madness over highlighting its supernatural horrors. With “Dawn,” Wemple has taken the opposite approach. The film is chock full of creatures and terrors. If nothing else, the film is a lot more fun than Wemple’s previous entries for just that reason. It’s also lighter and more humor-filled. At times, it seems he may have taken the whole thing a bit too far in that direction, as he has replaced his previous character studies with rote and cliched ones. In particular, Everett, played by frequent collaborator Grant Schumacher, borders on cartoonish. He returns, minus an eye but having gained a chaw-filled mouth of yokel, as a hillbilly Nick Fury/Captain Ahab to terrorize our group in his quest for revenge. He’s both unnecessary and ridiculous.

At first, the audience might think that Wemple had merely assumed that where one monster was good, two, and even three would be better. Anyone familiar with his two prior movies will see he’s attempting mythos-building here. Wemple may have hoped to create a dynamic crossover between the two legends. Instead, the outcome echoes 1960s Godzilla, with Bigfoot as the big green guy and Wendigo and his demon minions as Ghidorah and Company. Sorely missing is Tokyo.

Introduced into all this is that mysterious jeweled pendant necklace that brings its nothing but ill. Its effects on group member Isabelle make for some of the most enjoyable and terrifying scenes in the film. It’s “Evil Dead” thrown into the mix, with Isabelle’s hapless (and inexplicable) boyfriend Chris falling into a pseudo-Ash role. Ariella Mastroianni gives it her all in a performance that ranges from glib to horrified to maniacally demonic. She is, without a doubt, the best thing in “Dawn of the Beast.” It’s hard to say if the “Evil Dead” comparison is intentional. Chris, in any case, would be a pale version of its iconic anti-hero, and Adrian Burke, though he makes an effort, is no Bruce Campbell.

Though less deathly serious than its predecessors and, as a result, much breezier, fun, and more genuinely horror-filled, “Dawn of the Beast” still shows Wemple still struggling to merge successfully story, tone, and scares. Despite a mish-mash of lore and some truly annoying characters, he still scores a few good hits in the scares department. Perhaps, however, it’s time he leaves his woodland terrors behind for the next project.