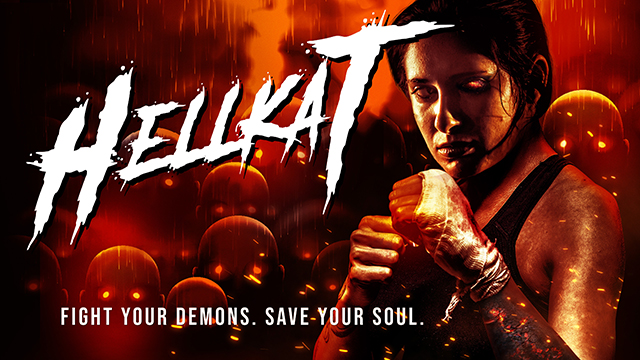 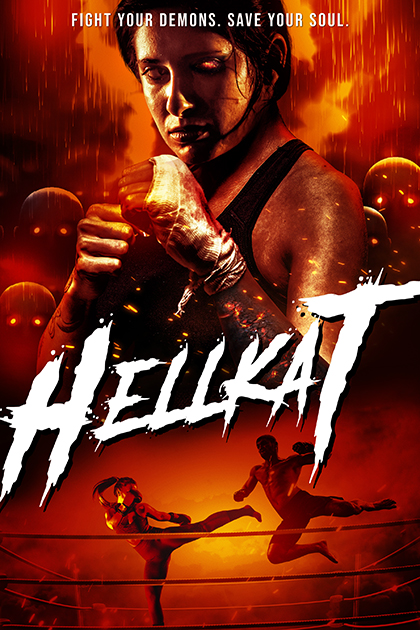 Purgatory. Classically it’s the place where you wait while your eternal fate is decided. Heaven or Hell. Which one? And one might guess, sitting down to watch a film can be just that: Purgatory.

Katrina Bash (Sarah T. Cohen), the “HellKat” of the title, is a broken-down MMA fighter who, realizing she has died by her own hand, finds herself in an underworld demon octagon battle for her destiny and the redemption of her son’s soul. Overseen by the lasciviously Cheshire-grinned Jimmy Scott (Ryan Davies), each match pits HellKat and a group of fellow lost souls against one supernatural opponent after another. She must best each and every one to come out victorious and save her child from damnation.

“HellKat” is a bit of a low-budget mash-up of “Jacob’s Ladder” and “Game of Death.” Unfortunately, it is neither as visionary as the former and certainly nowhere near as thrilling as the latter. While it might be unjust to draw a comparison to a Bruce Lee classic, an audience should at least expect an MAA-centric film to deliver the goods when it comes to the fight scenes. But “HellKat” is less than thrilling when it comes to the parts that matter.

The film starts decently enough. Kat finds herself stranded on the highway, and when the unctuous Jimmy gives her a ride, his less-than-Samaritan behavior earns him a bullet to the face. Arriving at a roadside bar, Kat finds her fellow patron to be less than hospitable—and less than human. While this seems to be leading us to a “From Dusk ‘Til Dawn”-esque film, it’s just the setup. And we’re nearly halfway through the film. It’s here that Jimmy reappears, little the worse for wear, and gives Kat the offer she can’t refuse. And it’s only then that we proceed into what’s supposed to be the meat of the film.

The combat scenes between Kat, her fellow fighters, and the various demonic opponents are anything but pulse-pounding. Cohen herself is not an MMA fighter, so the film has Kat don a black mask for each match. In this day and age, that may not seem unusual, but the effort to conceal the actor’s fight double only succeeds to a point. In any case, the fights are shot with little flair and edited without much dynamics or variety. Not helping matters is the filmmakers’ decision to place the ring in a darkened room, with the only audience being Jimmy and a bizarre drag character. No matter what level of fighters we’re watching, stripped of the infectious excitement of a rabid audience, it’s just one more place where the action scenes fail to bring excitement.

The opening scenes feature some pretty decent effects, particularly Jimmy’s shot to the face. When we move to the arena, however, the supernatural combatants are wholly unimpressive. They sport some fairly elaborate facial prosthetics, but everything seems to stop at the neck, with the rest mostly body paint. The result is less than terrifying and yet another let-down in the second half.

If anything gives “HellKat” the kick it desperately needs, it’s Davies’s Jimmy Scott. But even that character begins to outwear his welcome as the film rolls on and his early cocksure menace devolves into schtick.

“HellKat” has potential in its first half. But the film seems almost as if it’s two productions with the same cast of characters. When the film decides it wants to be an action-filled horror film, it doesn’t just lose its power, it fails to even land the blows.