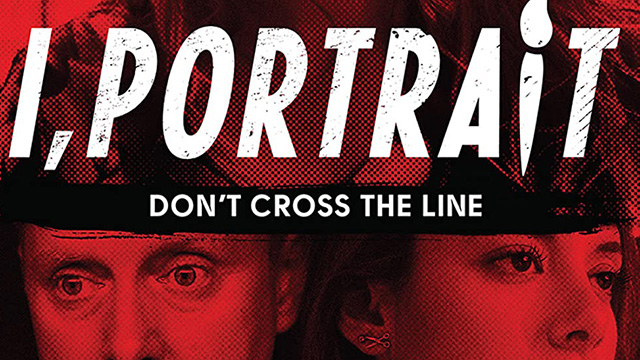 "I, Portrait"
review by Diablo Joe 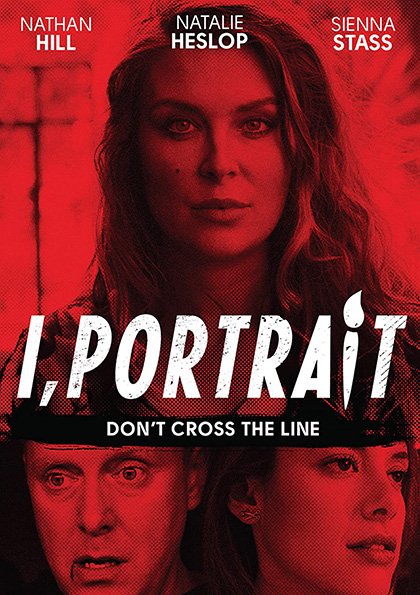 Sometimes a film comes along that is just so oddly and strangely made that you have to wonder if the filmmaker is somehow pranking us. The classic example of this would, of course, be Tommy Wiseau’s “The Room.” Now it would be unfair to say that “I, Portrait” approaches that level of bizarre ineptitude, especially since writer, director, and star Nathan Hill does not even remotely reach Wiseau’s unique level of presence. Still, it is a film that induces incredulous head shakes and baffling curiosity from the opening credits to the very end.

“I, Portrait” is a fairly basic femme fatale premise. Julian (played by Hill) is a successful Aussie casting agent. His wife Carmen is a beautiful and famous painter. The pair find their marriage threatened by the arrival of Carmen’s long-lost friend Stephanie, a lovely but disturbed woman who has set her sights on Julien as her soulmate. Hill takes this simple concept and encumbers it with a pile of story details ranging from the clunky to the downright bizarro. Add to this wooden acting and some genuinely mind-blowingly awkward editing, and you’ve got a recipe for disaster. But like a car accident, it’s rather hard, sometimes, to look away.

“I, Portrait” could have easily trimmed tens of minutes from its run time if the editor were to remove the extended pauses between each character’s lines of dialogue. Almost the entire film is, “I say my line” BEAT “You say your line” BEAT “I say mine,” except when the exact opposite occurs, and lines of dialogue are clipped abruptly by cutting to another scene. Then there are instances when actors bizarrely end a line of dialogue with a completely out-of-context facial expression as if puzzling what they had just said. Cutaways to odd incongruities like a plant, or a jar of peanut butter in a basket, abound. Editor Carson Sheen’s resume exists solely as a collection of Hill-directed or associated films, and one might question if he is simply a pseudonym. The film’s other time-wasters include endless musical interludes, often over otherwise soundless montages that add nothing to the story, and a truly strange news interview with Carmen about her “celebrated” Tree of Life painting. In a rambling, minutes-long exchange, Carmen incoherently strings together incomplete sentences about her “work.” It truly has to be heard to be believed.

The idea that “I, Portrait” attempts to posit Carmen as any sort of artist, let alone one who receives so much recognition and media interest based upon a single painting (and which looks like something from a Pour and Paint outing) is terrible in and of itself. But the film also tosses in a subplot about Carmen’s prognosticative ability, when working blindfolded, to paint things that will come to pass. It’s hard to say which idea is more unnecessary to the plot, but both concepts are equally ludicrous and hard to swallow.

While we’re at it, let’s address one other unbelievable elephant in the room: Hill’s ego. Nearly every woman in the film hits on Julian at some point. Stephanie’s initial reaction to meeting him? “What a babe!” We’re all for celebrating paunchy, middle-aged men with thinning hairlines, but Hill is more Bob Odenkirk than Redford. As the movie's auteur, you may get to put lines like that in the mouths of your leading ladies and create sex scenes for yourself, but it doesn’t mean audiences buy it.

This review could easily be twice its length in describing “I, Portrait’s” cinematic transgressions. Some, like the film’s bloat, are nearly unbearable, but others, such as the laughable catfight near the end, threaten to push the movie into “So bad, it’s good territory.” Nathan Hill has been making films for over a decade, spanning action, to romantic comedy, to Aussie cryptid documentaries. If “I, Portrait” is a serious attempt at creating a good film, then there is little hope for him. If it’s a joke, then it’s so complete that Hill’s oeuvre might be able to convince you in vampires, aliens, and Bigfoot down under as well! In any case, it’s an awful film that might just be appallingly enough to be entertaining.

This devil of a reviewer gives “I, Portrait” 1 out of 5 imps