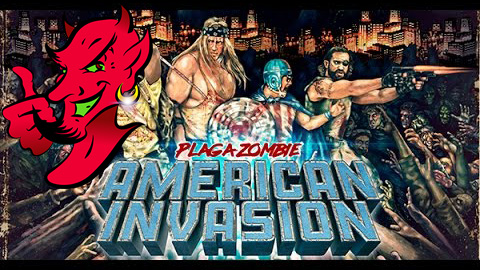 See Plaga Zombie December 4th along with some disturbing short films from It Came From The 508 Productions in New Bedford, Ma!
www.plagazombie.com 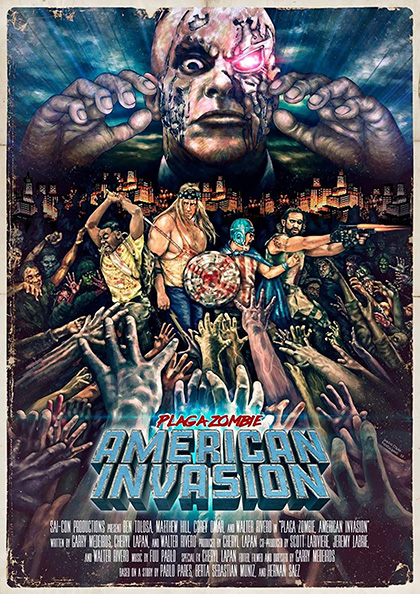 Too often, when you see a low-budget, tongue-in-cheek, ooey, gooey zombie flick, you pretty much know what to expect. It’s a lot of mayhem and gore, bad jokes, and boobs and blood. If the film is a tribute to a beloved series, it’s often all for the worse, as the filmmakers’ enthusiasm and love often trample the need to make a film that entertains the audience as much as it did its makers. “Plaga Zombie: American Invasion’ isn’t just an exception to this trend; it’s a delightfully skillful one.

Made with the original filmmakers' blessing (and participation), this sequel/continuation to the groundbreaking low-peso Argentinian Plaga-Zombie trilogy carries on the bizarro comedy and goofy gore. In place of those pictures’ Max Giggs, Bill Johnson, and luchador John West, we have Nash, Manny, and woebegone wrestler has-been Sam. And the action has relocated from South America to South Massachusetts, specifically New Bedford. But we’re still dealing with the familiar alien invasion, government conspiracies, and, of course, zombies.

“Plaga Zombie: American Invasion” really is a bit of a wonder. It’s a triumph of resilience and ingenuity over budget. The film’s clever, often laugh-out-loud comedic bits (that somehow manage to be simultaneously smart AND stupid), ingenious and well-done visual effects and ridiculous gore and makeup are a testament to everyone involved.

The cast is superb. Corey Spencer plays the perfect straight man as the heroic, sword-wielding Nash. Matthew G. Hill brings a wonderful sad-sack quality to Sam, a man who keeps getting knocked down but, with inspiration from his hero John West, manages to get back up again and bash zombie brains. But perhaps the most enjoyable is Ben Tolosa’s Manny, a delightful weirdo of a character. Whether baiting and wheedling Sam or engaged in demented self-dialogue, Tolosa is a treat. As the eye-patch-wearing anti-hero Kobra Guevara, Walter Rivero channels appropriate Kurt Russell machismo swagger. It’s a character particularly apropos in a film where the US government LITERALLY cuts off a city from the rest of the country. Even the massive zombie cast of extras (delightfully clad in ridiculous colors and gawdawful wigs) play their parts with aplomb and glee.

And it’s in coordinating the scale of this film where we have to begin to acknowledge the skill and talent of director Garry Medeiros. His ability to wrangle all these elements into a movie that never seems to be a messy mish-mash of elements (despite being just that!) is not just commendable; it’s stunning. Musical numbers, slapstick, romantic pathos, pro-wrestling, movie homages (from the obvious—"Back to the Future”—to the obscure—Nazi-zombie schlock flick “Shockwave”)... none of this should work together, but it all does. It’s almost like we’re watching a working-class townie version of a Bollywood film.

And, as confident as Medeiros is in dealing with his cast, comedy, and madcap story, it’s his visual sense and flair that really shines. When not showing us an engaging, dynamic angle, or a smart, thrilling transition, his camera knows when just to sit and linger on a character (often Tolosa’s Manny) and allow their hilarious bits of business to unfold for us. As a director, he shows he’s got the start of a definite—and confident—style. It would be interesting to see what he might do with a more mainstream film because it’s evident that his skill and attention to detail behind the camera are just that assured.

If there is one big flaw to “Plaga Zombie: American Invasion,” it’s that its Lebowski-esque ending leaves us wanting a more satisfying wrap-up. Even with the potential promise of yet another (welcome) installment. Also, perhaps the film’s editing could be a bit tighter to give a few of the action sequences and comedic gags a tad bit more punch. But that’s a minor niggle. Even at 105 minutes, “PZ: AI” never drags or seems overly drawn out.

“Plaga Zombie: American Invasion” is a fine example of what intelligent, creative people can do when they get together under the direction of a self-assured filmmaker. It’s a textbook for filmmakers wanting to pay homage to their loves while creating something that feels fresh and exhilarating. Even excess need not feel excessive when it’s backed with skill and thought.

And a whole lot of colorful makeup and blood.

This devil of a reviewer gives “Plaga Zombie: American Invasion” 4.5 out of 5 imps.