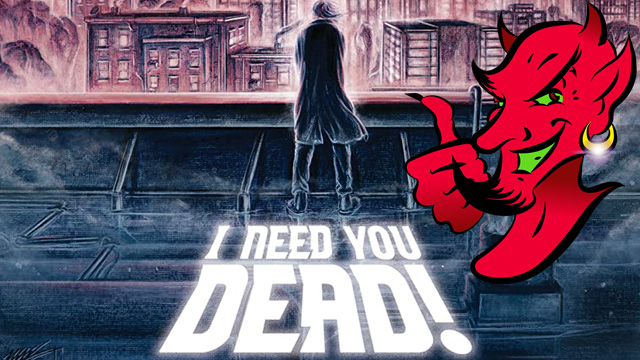 "I Need You Dead"
review by Diablo Joe 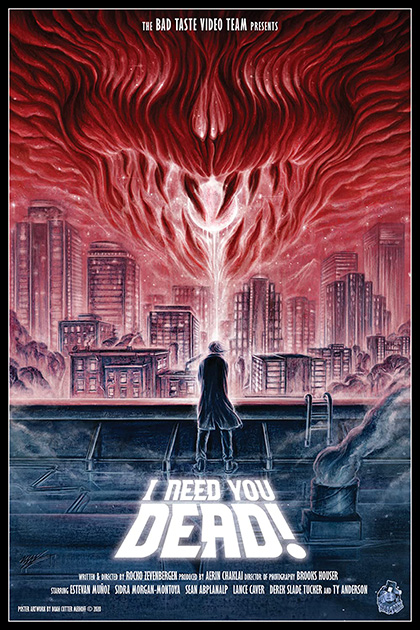 "I Need You Dead"

Troma-esque. It’s become a bit of a go-to adjective. Outrageous, manic content, filled with boobs and blood, completely lacking in taste or shame. It’s given filmmakers freedom and impetus to, in the words of Troma’s Lloyd Kaufman, “make your own goddamn movie!” Sometimes that’s an excuse for a filmmaker to throw everything piecemeal into their film, and then sometimes…

“I Need You Dead!” director Rocko Zevenbergen has cut his teeth as part of Team Troma, and at first glance, his feature debut—Kaufman cameo and all— may appear to be pulled from that mold as well. But as the film unfolds, Zevenbergen asserts his originality, talking his movie in a completely unexpected direction.

Ostensibly (perhaps, even, nominally) “I Need You Dead!” is the story of Dood, a hapless but likable Goth wanna-be artist. Stumbling through a party into the bedroom lair of fortune teller Scorpiottarius, Dood downs a few too many of the soothsayer’s “Dummy-Gummies” and finds his mind and world changed forever. Soon he is besieged by a grotesque demonic Creature who cajoles and berates poor Dood, driving him to the brink of sanity. 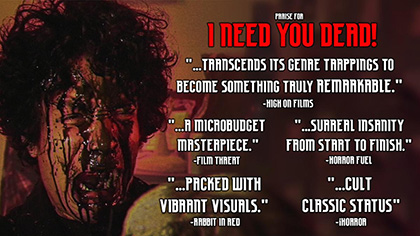 While that seems to be the film we begin with, Zevenbergen suddenly, and without warning, flips the tables on his audience and jarringly breaks the fourth wall. We are now, apparently, behind the scenes of the film itself. Zevenbergen is struggling to keep his picture and crew together, and we leave the kinetic and colorful world of Dood, thrust into a darker, more cinema verité aesthetic. At first, it seems like a genuine WTF moment, but soon, Dood’s world spirals from its clownish broad humor and meshes more and more with the “real” world of Zevenbergen and Co.

It’s an audacious and risky move that may not pay off for all viewers of the film. And it doesn’t always work 100%. But, as this shift progresses, it soon becomes apparent that Zevenbergen is doing this in a full-throated, confident manner. No longer are Dood and his torment at the hands (appendages? barbed vines?) of the Creature facilitated by the cinematic Zevenbergen. Instead, it’s Zevenbergen, tormented by his filmic creation. And the nightmare-scape keeps escalating into a tumult of bizarre visuals and set pieces.

Firmly aiding and abetting Zevenbergen is his excellent cast, headed by Estevan Muñoz. Muñoz takes Dood from luckless and even clownish to tortured and terrified. At times, it’s a physically demanding role that requires implicit trust in his director and a willingness to be completely fearless. Muñoz gives it his all.

Zevenbergen’s visual sensibility is wide-ranging. The opening sequences are fast-paced, dynamic, and colorful. His camera moves briskly, his compositions are sharp and exciting, and his editing is crisp and fun. But he shows he can take things in a wholly different direction as well. The latter half of the film devolves into a completely different style, ever degrading as Zevenbergen’s onscreen self unravels. And equally effective is his use of sound. Moving from bright and jaunty, with a Devo-adjacent pop music track into a hellscape of static, screeching tones, and white noise, it too becomes positively terrifying.

In truth, if there is a single film that “I Need You Dead!” evokes, it is, interestingly enough, “Berberian Sound Studio,” Peter Strickland’s opaque, unnerving 2012 film. This picture is as equally unsettling and confounding, but in a welcome manner. Zevenbergen’s sensibility sometimes brings an easy comparison to David Lynch, but a more daring and surreal era of Cronenberg’s oeuvre as well. “I Need You Dead!” is an unexpected cinematic offering that, when it works well, is a different kind of horror treat.