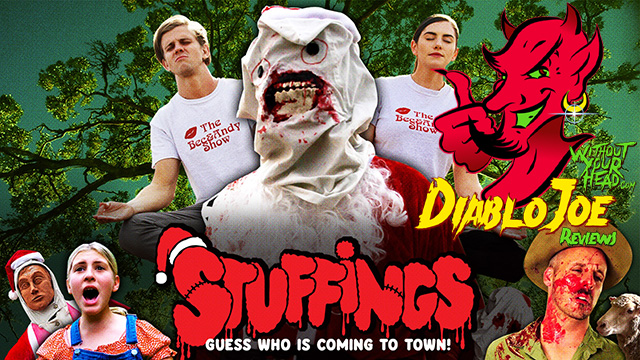 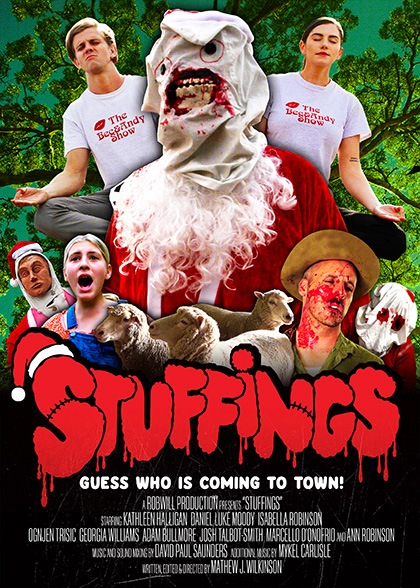 Christmas-themed media has always been a bit of a hit-or-miss affair. It’s the most wonderful time of the year, or so Andy Williams sings, and it’s also the most tradition-filled holiday. And that doesn’t just extend to gift-giving and decorations. Christmas songs are mainstays, be they good or gawdawful, and the same can be said for Christmas movies. And that includes horror. 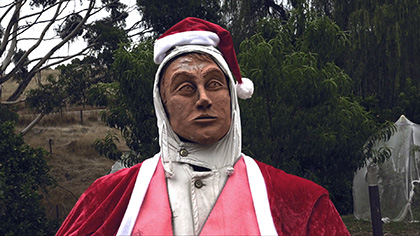 Coming from Down Under, “Stuffings” is a low-budget Aussie entry into the X-mas slasher tradition. And it puts a bit of an odd, almost folk-horror spin on things while simultaneously taking a dig at Internet influencer culture. Bec and Andy are a YouTuber couple filming a Christmas camping excursion in the village countryside outside Adelaide. But their streaming plans are instead met with streams of blood when a terrifying Santa entity feared by the townsfolk hacks and slashes its way into their holiday. 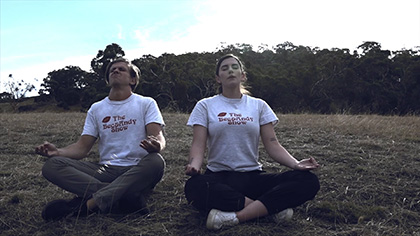 Conceptually, its killer is an admirable attempt at a conceptual spin on the usual crazed Clauses we’ve seen for years. It seems this demonic figure (resembling a cross between a rag-doll Santa and “Spongmonkeys,” those bizarro google-eyed toothy things from Quiznos ads of a couple of decades ago) is well-known to the locals. They attempt to ward him off from their homes with horrifying Santa scarecrows and hold lotteries to select sacrifices demanded by the creature. In an effort to spread the victims around a bit, the citizens have enticed Bec and Andy with the hopes they become this year’s offering. 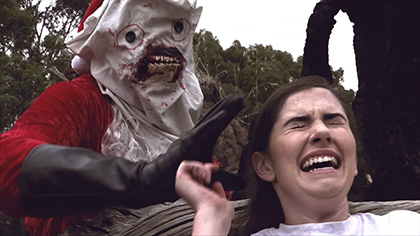 If it sounds a bit like “The Wicker Man,” then you’re right. There are quite a few analogies and comparisons to be made to that folk horror classic, and “Stuffings” even has a couple of jaunty and twisted folk songs to regale the audience. But the hills outside Adelaide are not Summerisle, there is no charismatic Christopher Lee character, and Bec and Andy are nowhere near as engaging as Sgt Howie. 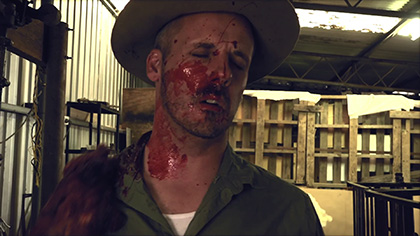 If one were to start with the problems found in “Stuffings,” one must begin with the film’s Internet couple. Intended as shallow, superficial, and grating, the pair is exactly that. The issue is that “Stuffings” spends far too much time with Bec and Andy, especially in the film’s first half, which subjects us to just too much of their supposed online content. They are unbearable. Even if meant as comic relief, they are neither. 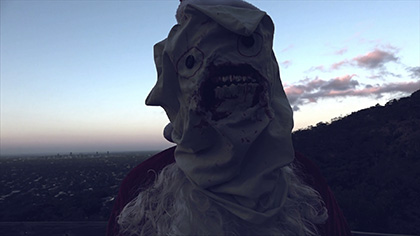 The other main problem is that the film never cements its mythos. The townsfolk speak of being responsible for the killer St. Nick but the film never thoroughly explains just why or what the thing is. Mystery is good. Vagueness and sloppy exposition? Not so much. As such, we never grasp the rules or rituals at stake. Some townsfolk fear the thing with all their heart, panicking when a scarecrow has fallen over. Others talk of it the way a bad parent nonchalantly speaks of a misbehaving child while visiting relatives. 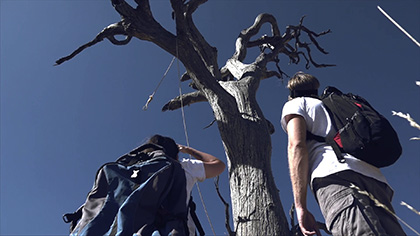 Had “Stuffings” been a short, say 30 minutes or so in length, it could have been a fun exercise in holiday horror. It has some neat ideas and its Santa killer is kinda cool (if a bit inept). Even Bec and Andy could have been as idiotic as they are without wearing out their welcome. And at that length, the film’s ending twist—a pretty nasty concept that almost redeems the picture—would have been a real horror film gift to find under your tree.

This devil of a reviewer gives “Stuffings” 2 out of 5 imps.