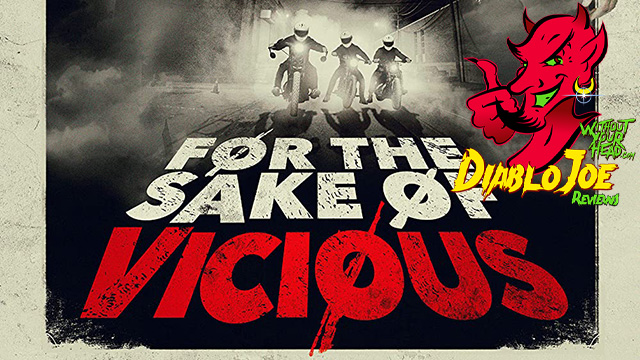 Diablo Joe Reviews For The Sake of Vicious

"For The Sake of Vicious"
review by Diablo Joe 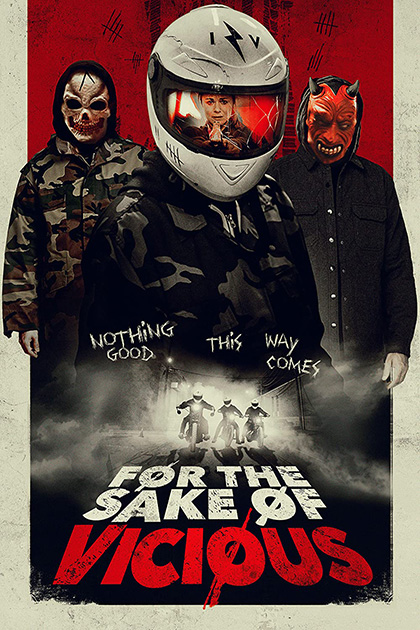 "For The Sake of Vicious"

It’s Halloween night, and Romina, a nurse, returns home at the end of her shirt to find a startling situation: a man, brutally beaten, lies on her kitchen floor; his assailant and kidnapper, Chris, urges her to assist him in keeping the man alive. Why? Because Chris insists that the man, Alan, brutally raped his daughter years before. And Romina was the nurse who attended to the girl. But as Chris brutally struggles to extract the truth from his captive, things take a darker and more violent turn that threatens everyone involved.

“For the Sake of Vicious” is an odd mouthful of a title, but it is aptly suitable. The film starts off tense and brutal and jacks up every aspect of those adjectives, turning things up to eleven in a bloodthirsty struggle for survival. Directors Gabriel Carrer and Reese Eveneshen, who also wrote the screenplay, pull out all the stops to hammer their audience with a relentless assault of taut, uncompromising filmmaking.

The first half of the movie is an emotional rollercoaster. The audience, like Romina, is forced to watch as the distraught Chris brutally interrogates Alan, demanding his confession. And as we feel Chris’s pain, we share the impact of every blow he lands. While undoubtedly an asshole, is Alan the rapist? The more and more Chris tortures him, the less sure we, and Romina, become.

At almost precisely the film’s midpoint, the whole tone and situation of the film shifts. Romina’s doubt triggers a tumult of events that turns her small home into a warzone as a horde of masked men descend upon the house, ratcheting up the terror and the violence to unthinkable levels. And the chaos of the night forces the audience to reevaluate the entirety of its expectations based on the film’s first half. But Carrer and Evenstein barely give us a chance to breathe, let alone suss out the situation before us.

Part of the benefit of that unrelenting assault is that we never get a moment to question much of the sheer, over-the-top excess of what unfolds before us. The longer the mayhem unfolds, the more ridiculous the notion that this all goes unnoticed by neighbors and the police becomes. Likewise, the sheer endurance and resilience of every character push credulity to its breaking point. Never mind. Just sit on the edge of your seat and give yourself over to some incredibly visceral filmmaking.

One of the critical reasons for the film’s success is its cast. As Chris, Nick Smyth takes us by the hand through his anguish, desperation, and despair. Each time he strikes Alan, we are there with him, hoping it elicits the admission he so desperately seeks. But Colin Paradine, while never allowing us to like Alan, manages to make us feel for him, nonetheless. He is a wholly unpleasant jerk of a man, but we doubt his guilt. He may be—indeed, he IS—guilty of many crimes, but is the rape of a child one of them? Still, as good as these two are, Lora Burke turns in a powerhouse performance that eclipses both of her co-leads. Tough, vulnerable, empathetic, and raw, she is, simply, phenomenal.

Carrer and Evenstein prove themselves masters of staging action and horrifyingly brutal violence. Unflashy and unpretentious in their style, they barrage and exhaust their audience with relentless and bloody pandemonium. Even with chaotic fights set in claustrophobically small rooms, we never lose track of the participants (though many are either disguised in similar-looking devil masks or, like something from the original Mad Max, full-faced motorcycle helmets) or the action. Christopher Nolan could learn quite a bit from these two.

If you are a fan of the revenge film genre or raw, unblinkingly violent action pictures, then “For the Sake of Vicious” is a must-see. Uncompromising, often right nasty, and bloody as hell, it is a fine example of ensemble acting working in the service of talented, confident filmmaking.

This devil of a reviewer gives “For the Sake of Vicious” 3.5 out of 5 imps.