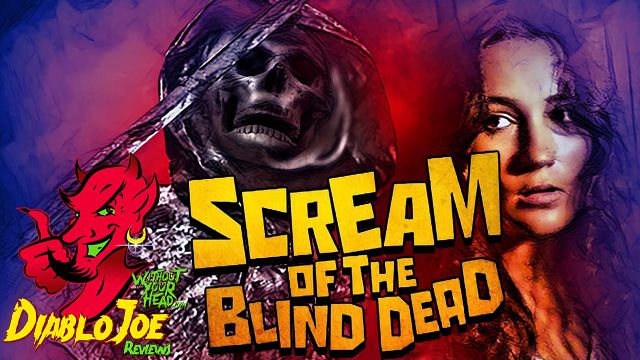 "Scream of the Blind Dead"
review by Diablo Joe 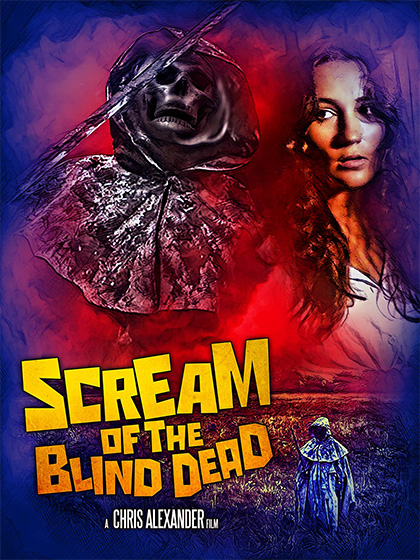 "Scream of the Blind Dead"

Amando de Ossorio’s “Blind Dead” tetralogy is one of the great, legendary horror film series. Straddling many genres—zombie, mummy, vampire, the occult—and reinvigorating Spanish horror cinema—his films of ghoulish revenant Knights Templar, their eyes long-ago consumed by carrion, are known for their mood-soaked atmospheric imagery. Less lauded are their storylines. Even the greatest aficionados must admit that de Ossorio could play a bit fast and loose with his own mythos. But the enduring elements that worked did so for a reason.

Opening with a young girl pursued and killed by one of the Blind Dead; the film then flashes to Virginia, a beautiful woman traveling through the countryside by rail. The train stops, and Virginia disembarks to wander. She stumbles upon a relic castle and begins to explore. Soon she finds herself pursued by the cloaked undead knight, which tracks her through the night by the sound of her beating heart.

At best, it’s a minimal plotline, but Alexander isn’t here to present an involved story. Told almost wordlessly (there is no dialogue, per se, just some scant ominous voice-over), “Scream” is all about the element that the original series never failed to receive praise for: mood. Alexander captures, replicates, and accentuates the feel of de Ossorio’s movies. He has an excellent eye for interesting composition, and the film alternates between fluid camerawork and deft jump-cuts. Of course, there is also that languid slow motion that was a hallmark of the original films.

As noted above, Alexander gives several nods to the first of the “Blind Dead” quartet. Like “Tomb’s” ill-fated Virginia, this picture’s protagonist disembarks from a train and finds herself encountering the Dead among a castle in ruins. The first film’s lesbian-themed subplot is alluded to here, as Virginia flashes back to her farewell to her lover. Like the original’s Betty (a name given “Scream’s” opening victim) in the original, the knight here tracks Virginia by the sound of her incessant heartbeat.

But Alexander makes “Scream of the Blind Dead” a much more allegorical piece than de Ossorio ever made his films. There are shadings and moral themes not explored in the originals, and they are part of what makes this effort stand apart from being just a tribute or pastiche film.

“Scream of the Blind Dead” lacks some of the scale of the originals. There is but one lone knight (though not for budgetary reasons alone), and missing is one of the most haunting and memorable images from the original films—the achingly slow-motion shots of the Dead astride their steeds. One wishes the director had secured a horse for at least a few shots. But, though less effective in its interiors than exteriors, the film’s locations are superb. The movie’s decrepit, crumbling citadel could not have been better chosen nor utilized.

At just shy of 40 minutes, “Scream of the Blind Dead” is wise not to outlive its welcome. Being shy of feature-length, the film will probably be more sought out by “Blind Dead” devotees than stumbled upon by casual horror fans. It’s pretty obvious that they are director Alexander’s intended audience in any case. And those who love de Ossorio’s originals will likely find much appeal in his take on the legendary eyeless Templar.

This devil of a reviewer gives “Scream of the Blind Dead” 3 out of 5 imps.