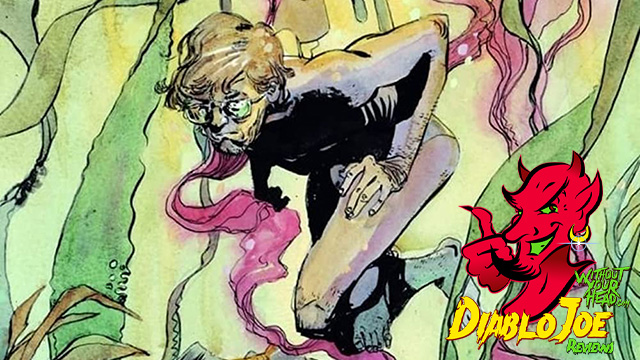 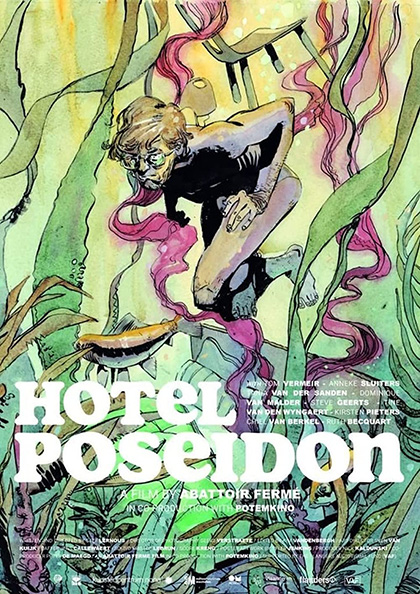 “Lynchian” is a term that many will be inclined to toss out (and noted, without irony, this review is doing just that) in describing Flemish writer/director Stefan Lernous’s sometimes hallucinogenic, sometimes nightmarish, often beautifully repellent film “Hotel Poseidon.” While perhaps not inaccurate, it may be too easy a go-to adjective. The language of cinema has always allowed for exploring themes and visual stylings far beyond the rote. When done with as much confidence as given here, it can be refreshingly welcome—even if it’s a breath of air that may be more fetid than fresh.

“Hotel Poseidon” follows Dave, the ersatz manager of the titular hotel, through the course of a day (week? month? year?). Pallid, slack-faced, and almost catatonic, Dave tends to the filth-strewn and dilapidated former inn that was once his father’s. Mostly play-acting as an innkeeper, events begin to disrupt Dave’s turgid routine. Young student Nora appears, insisting upon renting a room, and Dave’s ancient Aunt Lucy falls “ill.” Meanwhile, unsavory “investor” Jacki sets in motion his plans for turning the Poseidon into a nightclub featuring everything from music to dance to food (including Vietnamese!).

An ever-spiraling whirlpool of bizarre, claustrophobic, and inventive imagery follows. Time and psychic space become more and more malleable, and Dave finds himself batted about as if he were a half-broken mouse toyed with by some sadistic cat.

Visually, “Hotel Poseidon” is stunning. The hotel is a caricature of sordidness and filth. From the stagnant water of Dave’s morning gargle to the ashtrays overflowing with hundreds of damp, stained cigarette butts to the lights and appliances that burst into flame at the flick of a switch, the Poseidon is squalor taken to a ridiculous level. And as the hotel transforms itself over the course of the picture, all of the “glitz” and “glamour” that come with its new role as a nightclub only seem to highlight the decay and disarray all the more. The photography is deceptively lush. Never has grime looked so good. And the way in which Lernous moves his camera through the setting is often elegant and brilliant, as exemplified by the amazing opening title shot.

Likewise, Lernous’s cast is almost unified with the surroundings. Covered unapologetically with thick greasepaint pallor, some actors' faces become corpse-like. Others exhibit horrifically exaggerated red-lipped rictus mouths and bulging eyes (the visiting funeral service couple are a wonder to behold). The director seems to have given his actors wide latitude in how far to take their performances. Nora (Anneke Sluiters) is generally naturalistic; less so are Jacki (Dominique Van Malder) and Dave’s stepfather (Chiel Van Berkel), who both stretch into broad caricature. And then there is the grotesque extreme of Tania Van der Sanden’s ludicrously maniacal performance as Dave’s mother. Somehow, despite the massive swings in character stylings, it mostly works.

At the center of all of these is Tom Vermeir’s Dave. As both a character and a performance, Dave—and Vermeir—provide a center grounding point for the mayhem and madness. The actor could have easily underplayed the role to the level of near-emotional stasis, and instead, it is a wonderwork of subtle cues as to Dave’s inner workings and psyche. As distanced as Dave may often seem, he is, in fact, deeply invested in everything happening around him. He is a helpless, if often hapless, everyman. This fellow, who seems content to be passive with no desire to improve his squalid situation, may have been so pounded down by his environment that even just waking up in the morning uses all of his humanity.

It will be fascinating to see what cinematic worlds Stefan Lernous takes us into next. “Hotel Poseidon” is, as vile and repellent as it can often be, such an assertive and self-assured work that the phrase “Lernous-ian” could one day enter the vernacular of cinematic scholars.