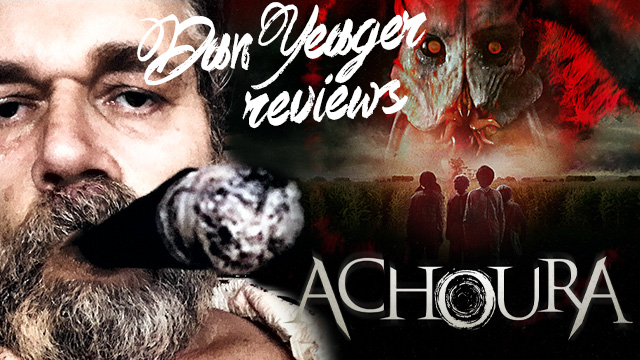 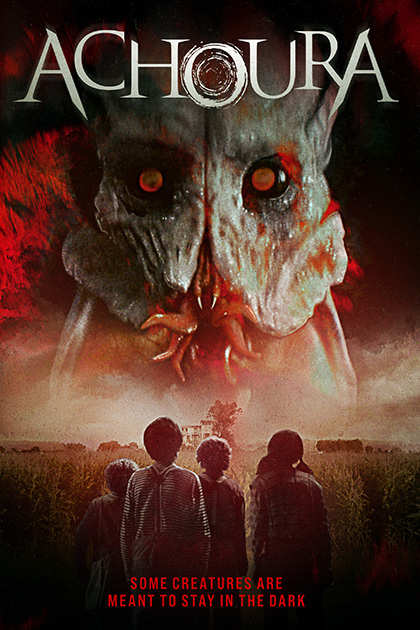 This is a horror movie from Morocco if you can imagine that. Have I mentioned lately how much I love the fact that great horror movies are made and enjoyed all over this crazy planet? I've never even heard of anyone involved with this movie, so I could Google their names and list them for you, but I think it would be good for you to do that yourself. I assume you read movie reviews to help you decide whether or not to devote 90 minutes of your short life to a thing, so we'll cut to the chase. Yeah, you should take a chance on this one.

Is it perfect? No, it left me singularly dissatisfied in several ways. I can't tell you what those are without spoiling it for you, so I won't. They are not enough to overshadow what I like about the movie, though.

It opens on this festival, Achoura, in a dark field around a bonfire in Morocco. They are all cavorting in masks and carrying torches and singing and dancing. Then we see this pretty young girl who just has a look of maturity. Unfortunately, that maturity has come from the fact that she is the child bride of this unforgivably ugly old man, poorly dressed in sloppy clothes, with sunken and baggy eyes scowling past a sinister nose of evil. His greasy hair lets us know we don't like him.

His young wife is making eyes at (that's what oldies call flirting) this handsome boy across the bonfire. They sneak away and hide out in a cornfield. (Why are cornfields scary? I grew up around cornfields and always found them pleasant.) Eventually, the old man sees his bride has run off and the chase ensues. He tracks them to a creepy old house (always a good sign) and stalks them with tremendous menace. He wears a belt and suspenders, not out of an abundance of caution that his pants stay up, but so he can use the belt as a weapon of discipline without the embarrassment for gis no-doubt stained and tattered underwear. He whips the belt off and wraps it around his fist with practiced ease as he prowls the old house spitting threats. The boy hiding with the girl can't take it anymore, so he takes action. I can't tell you anymore, because it will spoil it, and I'd like it if you watched this movie.

Like I say, there are quite a few elements to this movie that left me unsatisfied, but the final accounting tallies in the movie's favor. I may be just picking nits, but the story is told with a lot of flashbacks, and I don't think it's called for. I think they could have told the story in a perfectly linear mode and it would have been better. That may just be me, though. Also, just a note: you aren't going to outrun a demon in a shitty French Car. You're going to need some serious American horsepower, or maybe a Porsche. The Brits make a few models as do the Japanese, but that was just kind of silly trying to get away in that little P.O.S.

The Demon makes up for most shortcomings all by itself. You're going to enjoy the special effects. I don't like children myself, and I never found myself rooting for the demon, but I do think kids will like this movie. Use your own judgment, but I bet kids 10 or 11 and older will dig it. Also, it has a creepy old slaughterhouse in it, which kind of tugged at some heartstrings. Good flick.