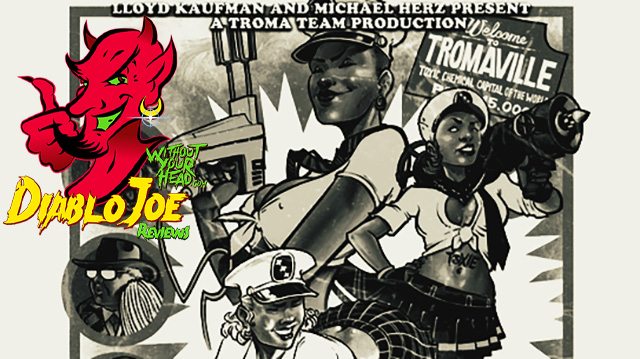 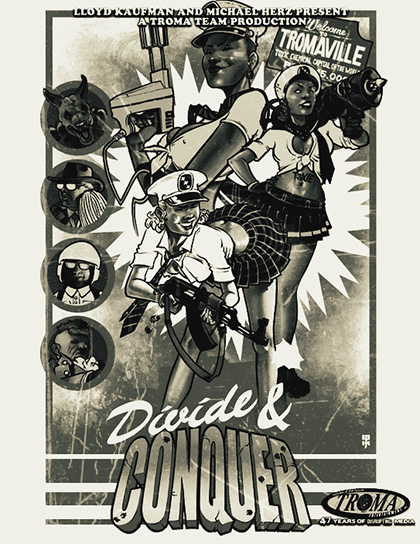 Troma films are always unusual films to review. You don't go about discussing subtext, nuance, or film theory when talking about Troma. What audience needs or even seeks appraisals for their films, anyway? Irreverence, violence, bad taste, tits and ass, and body fluids aplenty, Troma movies are the true punk rock cinema, more about heart and guts than anything else. Besides Lloyd Kaufman's twisted bastard child, only two other movie studios have spawned adjectives: Hammer and Disney.

As much as Lloyd Kaufman is Troma's face and mighty mouth, he has always credited his filmmakers for their vision, and "Divide & Conquer" is definitively the vision of director/writer/star Mercedes the Muse. It's the story of a trio of tough, ass-kicking sisters bonded not by blood but by resilience and survival against the odds. Lilith (Irie Divine), Athena (Knotty Peach), and Toxie (director Mercedes) are on the road, just trying to flee a life that exploited and used them. But they encounter racist, misogynist pigs and find themselves hunted down by a lethal white supremacist secret society that wants them dead. And to get to the leader behind it, all the three have to return to the New Jersey town they’re yearning to leave behind: Tromaville.

Let’s just get the basics out of the way. “Divide and Conquer” delivers just about everything you’d expect a Troma picture to spew your direction. Mercedes isn’t afraid to get good and gross. Brains pop, arms are torn off, and as much piss and ejaculate get spilled as blood. There’s also sex and nudity aplenty, but director Mercedes gives it to us in a very sex-positive, pro-feminist package. Our main characters are as in control of their situation as the director is in presenting her story and message (yes—in a Troma film!). And it’s a message that anyone who can’t grasp how a female director can sell feminism via a hefty dose of T&A could use.

From Lilith’s ability to entrance and control men with wafts from that which has long been a source of women’s unique power to Athena’s take-no-prisoners physicality to Toxie’s plucky spunk and resourcefulness, these are individuals. Mercedes has given her trio of characters distinctiveness vis a vis their strengths. Casual or indifferent viewers might mistake the many caricatures of misogynistic men as a dig at that sex. But when the trio turns to a male hacker for help, the mutual respect expressed between him and our three is unmistakable.

There’s a moment toward the end of the film where the irreverence and go-for-broke bad taste step aside for a moment to allow director Mercedes to express a genuine plea for change in our very real world. It is obviously heartfelt and important to the filmmaker, and it throws the intention of the whole film—and the full meaning of its title—into focus. But this IS a Troma film, so message be damned, we’re soon back in the game with blood and mayhem!

“For those who know where to look” was a phrase used by prudish censors to denounce “hidden” feminist and homosexual undertones they saw in the comic books of the 1950s. “Divide & Conquer” is every inch a Troma film. Raunchy, filthy, and absolutely moist with fun, it too, however, has an agenda “for those who know where to look.” But there’s no condemnation from this demonic reviewer.

A NOTE: It’s unfortunate that the closing credits do not include characters' names as well. One of the film’s highlights is the role of Ronnie, the owner of the nightclub, Gender-Bender. It is a colorful, wonderfully delicious performance by Jade Theriault worth singling out for praise.