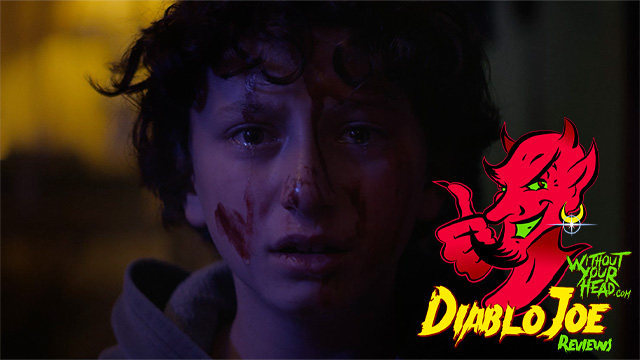 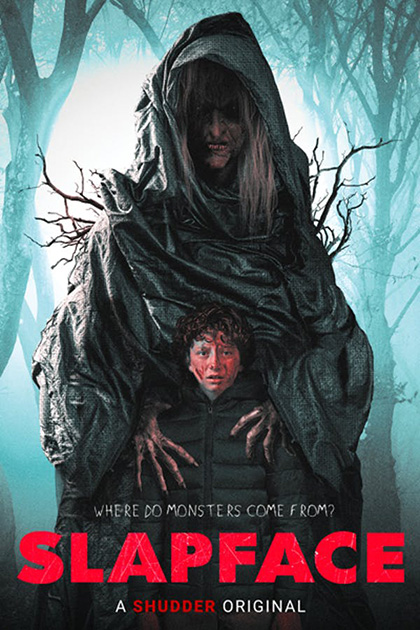 A film from writer/director Jeremiah Kipp, “Slapface” is the story of Lucas (“Girl Meets World” actor August Maturo), a young boy struggling to come to grips with the loss of his mother. Now in the care of his older brother Tom (Maturo’s fellow Disney TV show alum, Mike Manning), and ostracized and bullied by his peers, Lucas befriends a horrific and mercurial monster who offers him solace while also endangering those closest to the boy. Is this the legendary witch of the region who supposedly preyed upon children, or is it some manifestation of the rage and anger Lucas harbors?

With its “troubled child meets horrific, but empathetic monster” theme, “Slapface” desperately desires to be the sort of modern neo-fable exemplified by the films of Guillermo del Toro, Andy Muschietti’s “Mama,” and others. But several factors, not the least of which is the film’s core failure to understand and represent its young characters, sink its chances at ever reaching the gravitas and pathos of those other works.

“Slapface” often expects its audience to accept crucial aspects of its story simply because it states them as truth. The town sheriff (a hoarsely-voiced Dan Hedaya) praises Tom as the sort of surrogate parent his mother would be proud of. But he’s a lousy example, neglecting Lucas, giving him beers, and playing the violent game of the film’s title. The two alternately assault each other with ever-increasing intensity. Tom excuses it as a bonding game, a way to blow off steam, but it’s just grotesque and, if anything, sadistically abusive. For such an essential backstory to the boy’s relationship, “Slapface” deals with the boy’s parents in an equally unfulfilling manner. We’re told their mother was a saint; their father, less so. But we’re never given anything more than this, and when their absence is such a significant factor in Lucas’s life, it’s a noticeable void.

The film hurtles through the establishment of crucial character relationships, and key elements are rushed and poorly delineated. A fine example of this choppiness is Tom’s attempt to pick up a young woman at a bar, an attempt interrupted by the sheriff. But in the next scene, the woman is now Tom’s girlfriend, even having moved in with the brothers. Lucas is tormented and bullied by a pair of local sisters and their younger friend. Moira (Mirabelle Lee) develops sympathy for the boy, and the two cultivate a friendly, almost puppy-love relationship. But we’re never really privy to the evolution of their relationship that would give it any gravitas or depth.

But the worst is the relationship between Lucas and The Monster (depicted as a hulking caricature of a witch, complete with hook-nose). Whereas we might gloss over the lack of development between Lucas and Moira, using our own experiences to fill in the gaps, it’s doubtful any of us have a similar understanding of the rapport that might grow between a young boy and a horrible, murderous witch-creature. That dynamic—and the Monster’s overall purpose and intent—are things left far too much to our speculation.

Movies with strong, compelling child characters work well because filmmakers like del Toro and Steven Spielberg, aside from just understanding and appreciating how a young person’s mind and emotions work, can communicate those facets of childhood existence to their audiences. It is evident that director Kipp empathizes with his young characters. But whether it is deficiencies in his skills as a storyteller or an over-eager desire to cover too much emotionally significant territory, the result lacks both clarity and impact. It’s a childhood journey that meanders rather than takes us by the heart and hand.

This devil of a reviewer gives “Slapface” 2 out of 5 imps.