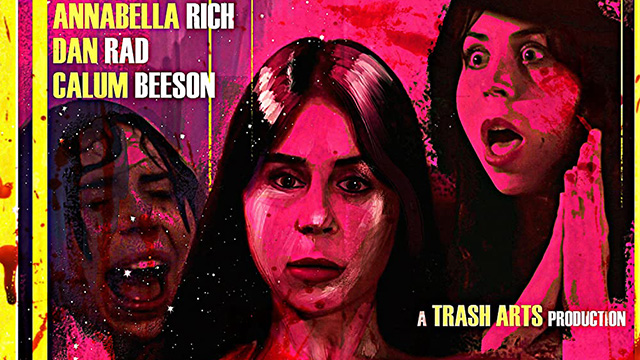 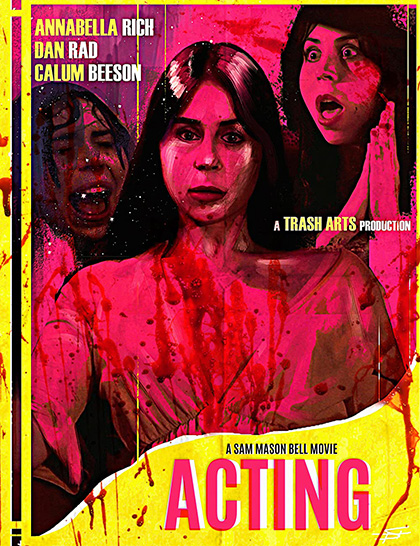 Life itself becomes both a performance piece and an unsettling descent into madness for Una (Annabella Rich) when she is cast into a one-woman play called “The Tale of the Black Mantis” in the brilliant psychological thriller Acting (2021) from director Sam Mason-Bell. To overcome the frustration of being turned down for a recent role, which is described early-on as “a massive flop”, Una quickly and obsessively begins to research and get to the heart of her most current character, The Mantis. Deriving inspiration from romantic male entanglements both old and new, Una blends research with reminiscence as a violence stirs her. As these brutal vibrations increase, the efficient 71-minute picture, which doesn’t contain one unnecessary or overdone scene, asks the audience whether Una has simply become engulfed in her potentially career-defining shot, a serial killer who slaughters male prostitutes, or if this exploration has awakened a dark side in Una’s own personality.

There are two factors which immensely impact the tremendous success of Bell’s superbly helmed excursion. The first of which is the style. Utilizing eye-popping giallo-inspired elements, a facet that is marvelously expressed in the equally radiant poster art for the exercise, Bell fluently blurs the line between conscious truth and unconscious projection. He even makes the presentation unfold like a play. This is with reoccurring monologues from Una that powerfully and eerily convey the darkness overtaking her as she delves deeper into the heart and soul of The Mantis.

This is robustly demonstrated in the skillfully executed opening speech. It is a near-four-minute bit which acts as a thesis statement for the endeavor. The frequently thoughtful themes of the opus (serial killers, God, sacrifice, and the blame, manipulation, and control men impose upon women) are intricately introduced and woven in this section. The extended concluding awards show segment also offers a wonderfully punctuative, haunting, and effective bookend to this portion. Additionally, Bell’s use of a solitary setting, Una’s residence, for most of the runtime enhances the smartly honed sense of claustrophobia that permeates the affair.

The second attribute that makes this indie masterpiece so triumphant is the vulnerable, credible, and quietly unnerving portrayal from Rich. She is compelling from the initial frame to the last. Her enactment is marvelous and layered. It’s a masterclass that is subtle and restrained while wordlessly articulating the brutality threatening to take full possession of her susceptibilities. Moreover, the depiction augments and compliments the uneasy underlying emotional and narrative intensity Bell so carefully and memorably employs into the impeccably constructed, ever-ominous atmosphere of the effort.

The rest of the small cast of the venture are also noteworthy and well-suited to the individuals they signify. Calum Beeson is excellent as Edward. Abbie Hills implements a phenomenal representation, which is spied in the originating passages of the attempt, as Director. Dan Rad is just as good as Stuart.

Furthermore, the terrific music from Ben Farrant propels the entirety of the cinematic contribution. This trait is heard as soon as the undertaking is set off in a startling, dramatic, and ear-catching manner. From herein, it helps carry the exhibition. This is as hardly a moment goes by without this sonic component dictating and upsurging the emotional beats on-screen. Continually, the songs and their usage perfectly proclaim what is going in within both Una and the unfolding plot.

A Trash Arts production, Acting boasts an intelligent, cleverly structured, and methodically paced script from both Bell and Rich. The enterprise develops both Una, her associations, and her perspective in a fully realized and profoundly satisfying fashion. This is without revealing so much about her that the central enigma of what exactly is going on with her is shattered. It’s a delicate, dazzling balancing act that is accomplished with deft dexterity.

Relatedly, the project is filled with organic and involving dialogue. It also benefits from beautiful cinematography from Bell. This quality accentuates the inherent grimness of the material while remaining visually spectacular. Proficiently edited by Bell and showcasing sharp makeup, costume and set design, sound, and camera work, Acting is an illuminating character study that incorporates stinging, ever-relevant social commentary. It’s also a knockout nail-biter with a mesmerizing, visceral eye. Simply put, Bell has crafted one of the best films of its type of the past several years.