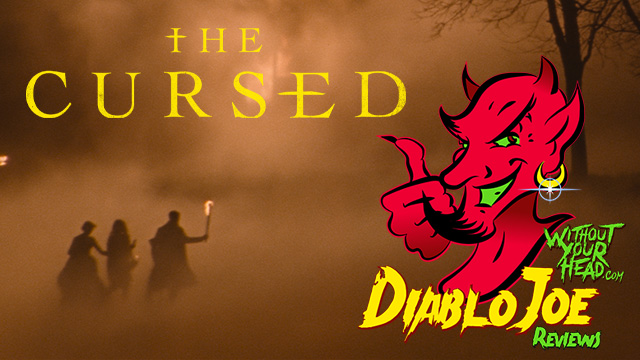 "The Cursed"
review by Diablo Joe 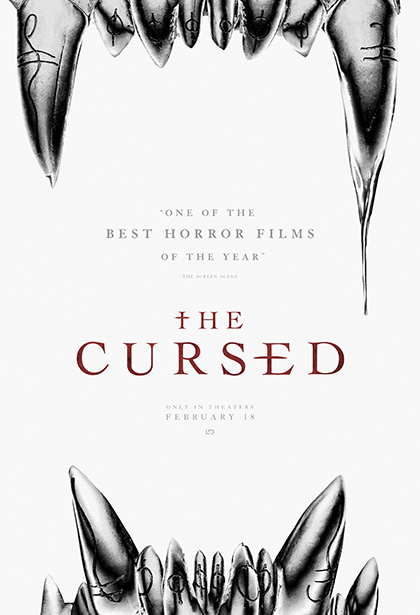 Beautiful and stylish, with superb attention to period detail, a splendid cast, and impressive practical effects, “The Cursed” is both an old-school werewolf film and a fresh twist on classic themes. It’s a mature, well-crafted addition to an all too often under-represented horror sub-genre. But despite it all, the sum of its parts falls just a bit shy of placing it among that pantheon of truly classic lupine cinema. But it comes really, really close.

Bookended by scenes of the horrors of the First World War, the core of the story is set in mid 19th Century France on the estate of a British land baron. After brutally squashing a land-rights claim by a small band of Romani, the lord, his family, and his community find themselves besieged by a curse that threatens to tear them literally apart. When a young pathologist arrives with more than a passing knowledge of the terror they are facing, the situation becomes a race against time as each victim unlucky enough to survive turns from prey into predator.

Writer/director Sean Ellis shows that he knows how to direct a film. His visual sense is superb (he is also the film’s cinematographer), and he has an excellent understanding of how to build tension. The film is filled with creepy tableaus and some fun scare fake-outs. He handles horror well, letting us see just enough, so we never dwell on the gore or the beasties, and that’s to the benefit of both. Not that the effects need masking, but Ellis’s technique adds mystery and impact to the horror.

Also excellent is the handling of his cast, who, like the photography and effects, are top-notch. Though some might focus more on his dashing good looks, Boyd Holbrook is excellent as the pathologist, McBride, who finds navigating the moods and authority of his host to be as much a danger as the film’s werewolf. Perhaps his character is a bit too all-knowing and confident, but Holbrook keeps him relatively centered. As the ruthless patriarch Seamus Laurent, Alistair Petrie exudes the hubris and ugly superiority of a man who must be right at all costs—even if those costs mean everything he has. As his wife, Kelly Reilly is a combination of haunting beauty combined with a tragic resignation that her family may die thanks to her husband’s cruelty and resolute pride. The supporting ensemble, especially the movie’s younger cast members, equally hold their own.

“The Cursed” pays homage to much of the classic lore of the werewolf. Its family, plagued by a Romani curse, and other nods to classic mythos, are familiar. But it also puts some unique twists on an old theme. Some, such as the ties to Biblical scripture, work better than others, and a few will provoke debate. In particular, the film’s version of the werewolf transformation may be a bit too out-of-the-box for some, as is its hairless werewolf, something we see more and more lately for some reason.

Ellis’s previous foray into horror was the 2008 Lena Headey thriller “The Broken.” That film was praised for its style but criticized for failing to follow through on its various themes. “The Cursed” will similarly be commended for its visual aesthetics and mood. While it is more thematically successful, in choosing the ending he did, Ellis does seem to have squandered a chance for its WWI scenes to deliver one final terrifying twist that potentially could have given “The Cursed” some real teeth.

“The Cursed” is, without a doubt, a worthwhile addition to the werewolf canon. The aspects of the film that work do so spectacularly, and its shortcomings are slight enough not to hinder any enjoyment. Scary, suspenseful, and just nasty enough, it is also a horror film that reminds us that even the most bloodthirsty fiends pale compared to the evils of man himself. And for lovers of good, old-fashioned monster pictures, “the Cursed” will be a tasty blessing.