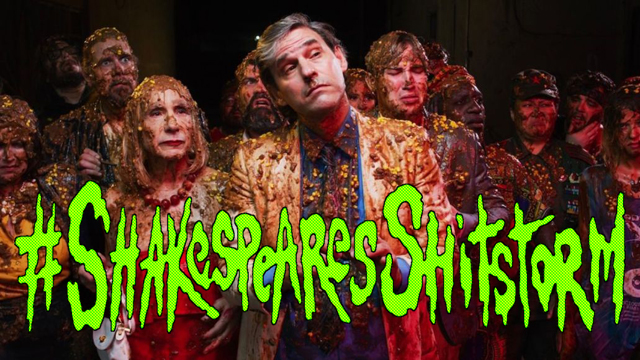 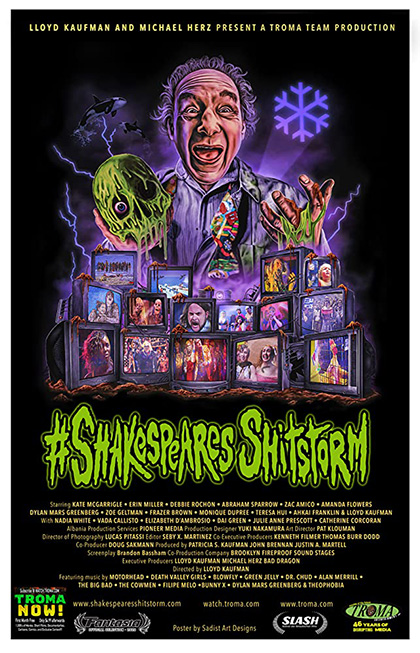 An extremely loose, clever, and wildly hilarious modernization of The Tempest (circa 1610-1611) by William Shakespeare, #Shakespeare’s Sh*tstorm (2020) is brilliant, inspired, madcap satire. Directed by the B-movie maestro Lloyd Kaufman and penned by Brandon Bassham, with additional contributions in this arena by Frazer Brown, Doug Sakmann, Zac Amico, and Kaufman, the 94-minute feature is gleefully off-the-wall. It is as unconventional, rebellious, and as unapologetically vomit, slime, and gore filled as one would expect from a Troma Entertainment release. Once again, Kaufman has fashioned the type of bold, hot-blooded, liberating four-course meal on celluloid theater patrons are presented with in increasingly rare instances. 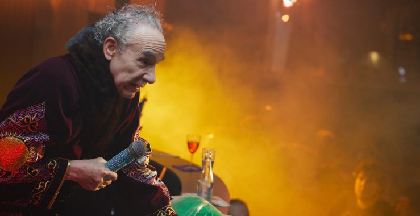 Likewise, the incredibly successful jokes unveiled in the enterprise are delivered in a rapid-fire manner. Such an approach is reminiscent of the slapstick model trademarked by the directorial team of Jim Abrahams, David Zucker, and Jerry Zucker. They are responsible for overseeing the immortal comedy standard Airplane! (1980). The article also calls to mind Mel Brooks, who helmed such seminal genre productions as Blazing Saddles (1974) and Young Frankenstein (1974). There is even a physical resemblance between Kaufman and Brooks that is casually mentioned in the final line of the narrative. Yet, there are so many other triumphant layers to the humor, from the often meta and socially relevant gags stemming from the lead-emitted banter to the wonderfully absurd situations that are continually unfolding on-screen, that the affair is sure to reward spectators through multiple viewings. 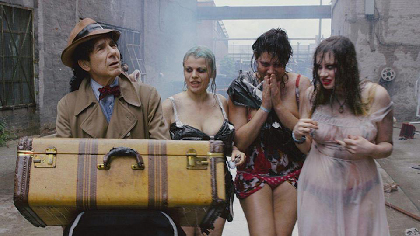 There is also an infectious knowledge of and appreciation for literature brimming in the heart of Kaufman’s latest masterpiece. It appealed to both the writer and the avid reader in me. For example, Great Expectations by Charles Dickens (1860) is playfully quoted in this ardent sendup. There are even some other landmark pieces from Shakespeare’s catalogue that are just as smartly addressed. These stabs at laughter even wink at Shakespeare’s soliloquy style in the later stretches. This is as characters verbalize with their own original poetic musings. 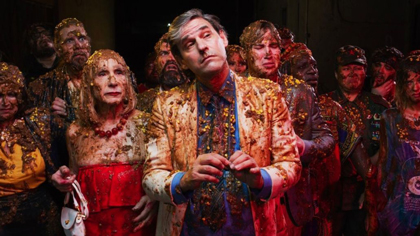 The exercise even illustrates the symbolic nature of music in The Tempest, which is to bring order from chaos and vice-versa, early in the first act. This is with its rowdy, engaging party sequences. There are even several original songs in the vehicle, all of which are as amusing as they are riotously guffaw-inducing, which nicely mirror the melodic compositions vocalized in The Tempest. #Shakespeare’s Sh*tstorm even consists of five acts and an epilogue, which is another alignment to The Tempest. 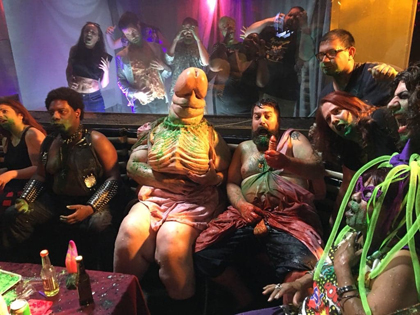 Commencing with an attention-garnering sequence of tragedy amid a protest that occurs on May 7th of 1986 in Manhattan, New York, Kaufman’s take on Shakespeare’s previously stated play concerns an unstable scientist, Propsero (Kaufman), who flees to Tromaville, New Jersey with his blind daughter, Miranda (Kate McGarrigle). Prospero hopes to escape his sister, Antoinette Duke (Kaufman), and other wicked pharmaceutical executives. Utilizing the assistance of a handicapped drug addict, Ariel (Amanda Flowers), Prospero gives laxatives to whales while his foes are on a luxury liner headed to North Korea. Such a measure creates the title gale, which brings these adversaries to the place where Prospero is hiding. In so doing, Prospero unveils an opportunity to enact vengeance. 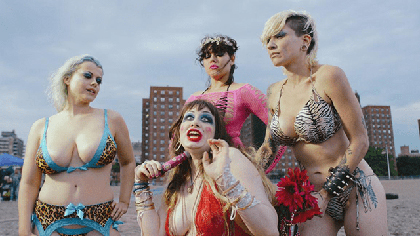 From the above plot description, one can quickly tell this venture aims to offend. This is also evident in its incorporation of anecdotes revolving around appropriation, censorship, the easily “triggered”, safe spaces, “big pharma”, and uptight critics. Relatedly, one of the most hysterical and memorable bits in the undertaking involves these latter-acknowledged individuals. It comes midway into the story. 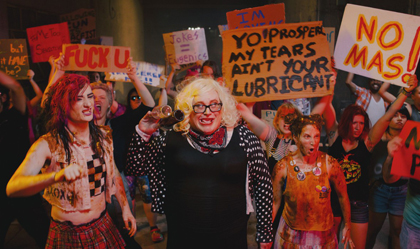 The segment showcases a pair of detractors who are seething with rage at what they have seen thus far of #Shakespeare’s Sh*tstorm. Regardless, Shakespeare (in a terrific, lively turn from Brown) confesses to a captive, live television show-like audience that this interpretation “is the first time they got it right”. This sort of fourth wall breaking is as Shakespearean as it is Tromatic. The graceful balance of quiet parallels and subtle underlying intelligence that courses throughout the runtime, which is exemplified herein, helps morph this undertaking into so much more than a collection of frantic punchlines. 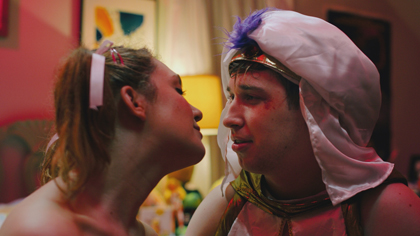 The dual performance from the always charming and watchable Kaufman as Prospero and Antoinette Duke is another highlight in this offering. McGarrigle and Flowers are both skillfully diverting in their roles. Debbie Rochon is spectacular as Senator Sebastian. The rest of the large, finely chosen, and varied cast embody their respective depictions with relish. 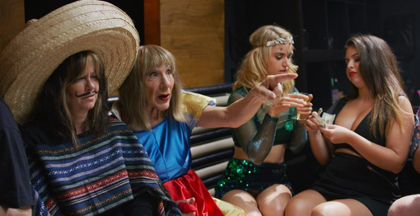 What is just as striking is the colorful, eye-popping cinematography by Lucas Pitassi. The editing, sound, costume and set design, and frequently gooey effects are impressive. Moreover, the screenplay is marvelous. It’s fluently and confidently paced. Despite its wall-to-wall parade of jest, it is bursting with thoughtful, stinging observations of our era. It also combines sufficiently developed central figures and a tried-and-true structure that beautifully suits the material. The circumstances and dialogue crafted within the script are outrageous. Regardless, there is an honest heart beneath it all. Kaufman’s endeavor focuses on such themes as kindness, betrayal, the corruptive essence of power, and romantic love. All of which are also found in The Tempest. This is without being preachy or out of place with the surface-level wackiness at hand. 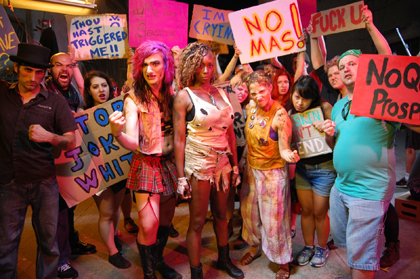 Further benefitting from sly nods to John Carpenter’s They Live (1988), Stanley Kubrick’s The Shining (1980), and a variety of Troma distributed flicks such as The Toxic Avenger (1984), #Shakespeare’s Sh*tstorm is as untamed, explicit, and virtuoso as Kaufman’s previous Shakespeare outing, Tromeo and Juliet (1996). Kaufman’s guidance of the project is as sharp as ever. His framing is a visual extravaganza. Even the near ten-minute end credits are crammed with amusingly comic portions of trivia, violence, and dance. This is as a wide variety of tunes propel the soundtrack. There is even a respectful memoriam section which opens this part. All of this arrives after a wickedly crowd-pleasing climax that runs approximately twenty minutes. It is as full of depth as it is in-your-face disruptiveness. Ultimately, #Shakespeare’s Sh*tstorm is an immensely satisfying, wholly unique, and unforgettable cinematic opus. It is the personification of everything I adore about independent filmmaking.