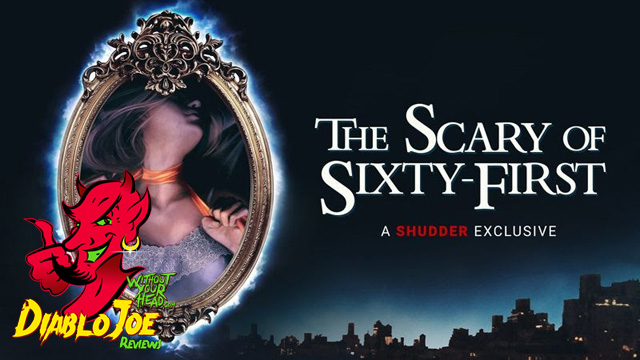 "The Scary of Sixty-First"
review by Diablo Joe

Watch "The Scary of Sixty-First" now on Shudder! 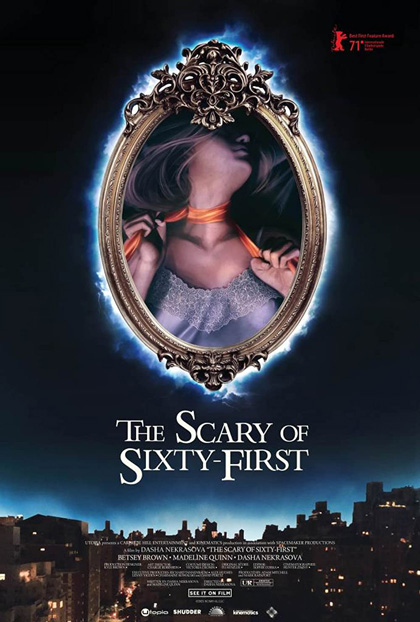 "The Scary of Sixty-First"

Actors often feel constrained by the work they get. As a remedy, write a script or direct a picture to either broaden their creativity or create a bravura role with the hopes that they break out. Think “Goodwill Hunting,” “Easy Rider,” or legendarily, “Citizen Kane.” Sometimes, it’s a deeply-felt message or story they feel the need to share. For whatever core reason
director/writer Dasha Nekrasova and co-writer Madeline Quinn produced “The Scary of Sixty-First,” the piece is partially intended as a vehicle for their acting talents, as well as the rest of their creative skills.

Noelle (Quinn) and Addie (Betsey Brown) move into a Manhattan apartment together. Uneasy roommates at best, their relationship is further fractured by the arrival of a young woman (Nekrasova) who informs them of their building’s disturbing history. Previously owned by the pedophiliac monster Jeffrey Epstein, the building was used as a haven for his and his friends' atrocities. As this mysterious woman intertwines Noelle in her web of conspiracy theories, the dark energies still present in the building begin to twist and torment Addie and threaten all the lives of all three women.

The use of any topic as a viable basis for a horror film can be debated. Certain matters are inarguably more delicate than some, and systemic, exploitative child sexual abuse definitely approaches the apex. An aspect of “The Scary of Sixty-First” deals with the conspiracy theories surrounding Epstein’s death as well as the speculative involvement of politicians, celebrities, and royalty in his sphere of child abuse. Had Nekrasova and Quinn thrown the majority of the film’s focus on that end and then peppered it with supernatural overtones, the film might have been better served. However, the filmmakers delve deeper, into the psyches of the victims themselves. In a world where yesterday’s news can seem like an eternity ago and memes go viral with increasing immediacy, it can be easy to forget the rawness, for some, of certain real-life situations. It’s here that some viewers may begin to challenge that hard-to-define line between art and impropriety. It is, perhaps, a discussion far too involved for a movie review and one best left for the individual viewer to decide.

No matter where you may fall on the potentially controversial aspects of Nekrasova and Quinn’s film, when it comes to “The Scary of Sixty-First’s” shortcomings, its script—and in particular, its characters— is where it all fails to come together. Aside from underdeveloping its trio of leads, none of them are at all appealing. Even the two supposed friends, Noelle and Addie, do nothing but bicker from scene one. It results in non-stop grating interactions that never give the audience a satisfying arc to follow when Nekrasova’s character enters the mix. All of the characters are so mean, cruel, and insulting to one another (the ugly, often defamatory name-calling doesn’t represent how people talk, it’s just lazy writing). We have no reason to invest ourselves in these characters, their opinions, or theories.

And the film tries to infuse those very theories with immense gravitas as if they were wholly unique to our characters. “The Scary of Sixty-First” wants us to believe that its leads are onto something profound when it's nothing we haven’t heard ad infinitum on social media. Likewise, the movie treats simple tarot cards as portentous arcane objects rather than items commonly available at any bookshop. One must wonder if Nekrasova and Quinn are struggling to poke fun at this conspiracy stuff or genuinely believe that they are being profound. It’s certainly hard to tell from their performances, which veer wildly from detached to manic. And Brown’s Addie suffers the worst as she endures the overtaking of her persona in a way that forces the actor into a performance that could be viewed as either incredibly daring or flat-out embarrassing. Either way, many viewers will at least find it uncomfortable.

As a director, Nekrasova fares better than as a writer. Her visual energy keeps things interesting in that regard, though some of the film’s quick-cut montages seem more thrown together rather than constructed. It’s hard to discern what she, working with Quinn, is trying to accomplish. As an actor, she has had a small but high-profile role on HBO’s “Succession,” and if the film is meant as a calling card of sorts, then it is far too idiosyncratic to succeed in that regard. If “The Scary of Sixty-First’s” aim is as a purely creative product, for many, it will fail there as well. Nekrasova and Quinn’s take on the Epstein horror, its controversies and unanswered questions, and the emotional impact, doesn’t intellectually bring anything new to the table. On an emotional level, for some viewers, it may seem to do his victims the injustice of potentially exploiting them all over again.

This devil of a reviewer gives “The Scary of Sixty-First” 1.5 out of 5 imps