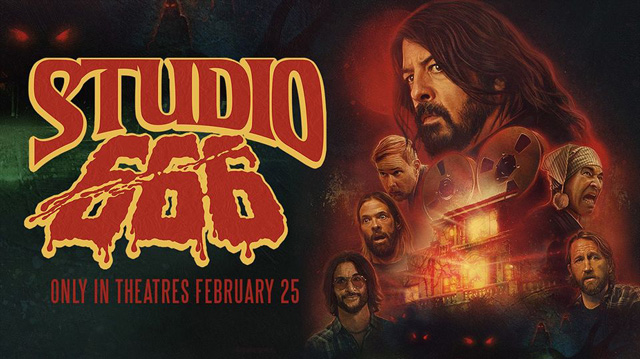 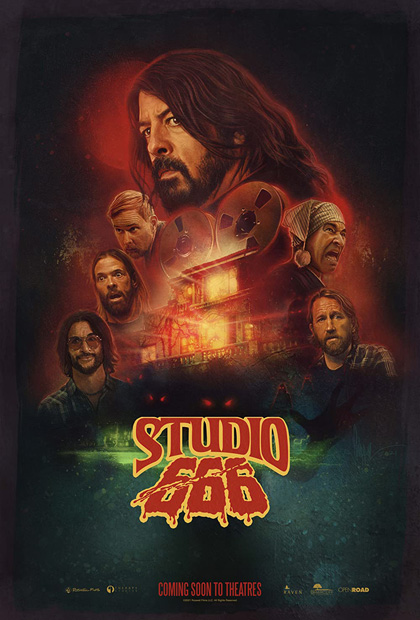 Elevated by its sly nods to and taking cues from such dread-infused classics as Sam Raimi’s The Evil Dead (1981), William Friedkin’s The Exorcist (1973), and John Carpenter’s Halloween (1978), Studio 666 (2022) is intentional camp done right. Sharply directed by B.J. McDonnell (2013’s bloody terrific Hatchet III) and smartly penned by Jeff Buhler and Rebecca Hughes, the overlong, but always entertaining, 106-minute feature is filled with impressive, inventive, and plentiful, especially for a relatively mainstream work, gore effects. Such is a factor, along with its related visual components, that is much in line with its 1980’s style straight-to-video genre spirit. The myriad moments of successful tongue-in-cheek comedy, though too broad on occasion, are frequently the result of the wonderfully watchable and hysterically haywire lead performance from Dave Grohl (as himself). The rest of the cast, including a stunning secondary representation from Jenna Ortega as Skye Willow and a memorable depiction from Whitney Cummings as Samantha, deliver their roles with just the right amount of schlock. Nonetheless, Grohl’s wacky, off-beat, amiable yet strangely organic enactment beautifully captures the tone of the production. Even when the gags don’t quite land, Grohl and the situations surrounding him are so amusing that such slight faults are quickly forgiven.

Based on a story by Grohl, McDonnell tells the tale of the iconic rock crew Foo Fighters gathering in a mansion with a tragic and violent history in Encino, Los Angeles, California to record their tenth album. Once the process has begun, Grohl almost immediately becomes obsessive and unhinged. In so doing, he focuses on the shaping of, not a whole LP, but a single song. More specifically, a tune that just becomes longer and more laborious on the members of the group to execute as the days pass. This is with no end to the ever-growing opus in sight. As bodies begin to pile-up around them and Grohl’s behavior becomes more erratic, the band finds themselves warding off both Grohl and the malevolent supernatural forces that are overtaking him.

This familiar, but well done and still promising, plotline commences with an efficient and effective slasher show opening. It transpires in 1993 and runs a brisk two minutes. This is made evermore attention-garnering by the marvelous score from Carpenter that thunders in sonic brilliance over the soundtrack during this episode. The distinctly moody vibe this melodic composition brings to the presentation, along with a fantastic and surprising cameo early-on from the maestro behind this arrangement, solidify the love and admiration for the cinematic macabre and its masters that pulsates throughout every frame of the project. Likewise, the usually satisfactory but unremarkable cinematography from Michael Dallatorre and Eric Leach is at its most appealing in this brief section.

As for the rest of the venture, the sheer likability of the Foo Fighters themselves and the high quality of their music drives the finely crafted buildup and intimate creative sessions that construct the bulk of the first fifty minutes of the exercise. Yet, it’s hard to deny that the characters found herein are underdeveloped. Admittedly, this isn’t the type of project where such an influence is the most pivotal aspect for maximum viewer engagement. Regardless, extra energy in this arena might’ve help make the stakes more palpable when the off-the-wall terror, primarily the squeal-for-joy ingenuity of the kills, that occur in the superior second half of the design come into play.

The structure, pacing, themes, and even some of the uniquely presented dialogue in McDonnell’s latest vehicle are standard service. In retrospect, this trait nicely reflects the already addressed late-night movie model the affair superbly parallels. The mostly one-location setting, which has an intriguing past that is fully fleshed-out in the article, also triumphantly mechanizes in this manner. It’s a tried-and-true impetus for the narrative. Yet, it assists in issuing a comfortably claustrophobic atmosphere to the proceedings. The numerous rock and roll references sprinkled throughout the exertion add to the easy, winking at the audience enjoyment of the piece. Even when the flick emerges as a bit too safe, the proficient editing, makeup, camera handling, set decoration, and sound also nimbly overcome such defects.

In a year that is continually demonstrating the strength of new entries in long-standing shock series, from the excellent Scream (2022) to the criminally underappreciated Texas Chainsaw Massacre (2022), McDonnell has provided a necessary reminder of how refreshing an original film can be. McDonnell’s latest venture is delightful, unpretentious fun. It knows exactly what spectators demand of it. In turn, it caters to these expectations in tremendous fashion. Boosted by a pair of elegant credits sequences, this is the type of big screen excursion that lovingly embraces its many tropes. Thus, the entire effort is vastly improved. Much like Foo Fighters’ recent audio output, the upbeat and solid nine-track disc Medicine at Midnight (2022), Studio 666 rocks!