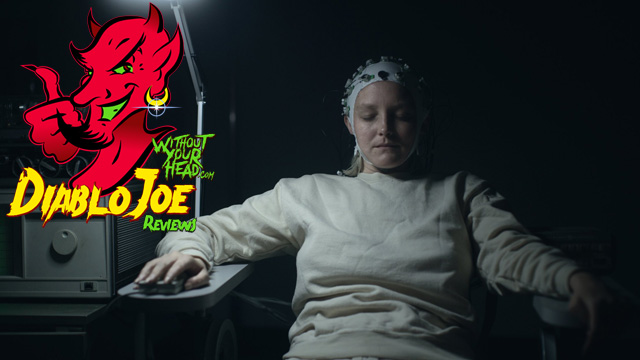 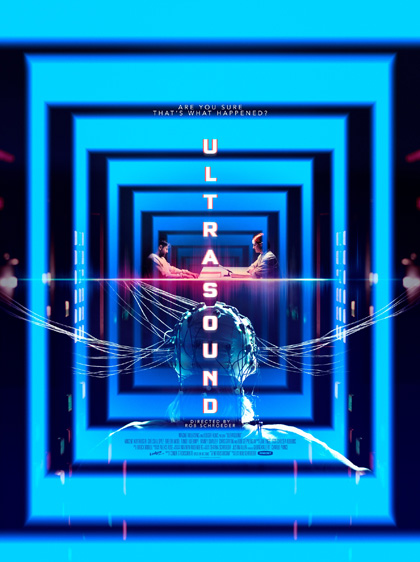 How many films have opened with a character, drenched in the rain, pulling up to a dark, secluded house searching for help? Sometimes the outcome turns dark for the visitor, sometimes for the residents. Occasionally, it spells doom for both. But seldom has such a cliched opening scene initiated such a tumult of faceted and shattered realities as director Rob Schroeder’s sci-fi psycho-thriller, “Ultrasound.” 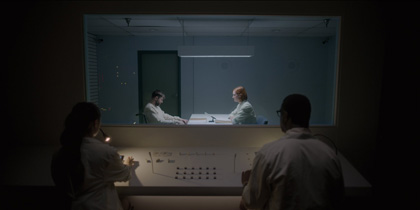 Glen (“Mad Men’s” Vincent Kartheiser) finds himself at the door of Cyndi and Art, a May-December couple who are far from who they seem. When shlubby Art encourages a tryst between Glen and his ingénue wife, it seemingly sets in motion a series of events that challenges the perceptions of the film’s characters and we, the audience as well. These deceptions run deeper and with a complex history and far more devious machinations than any single player in the puzzle can comprehend.

Based upon the graphic novel “Generous Bosom” by Conor Stechschulte, who also wrote the screenplay, “Ultrasound” is a cryptic, Rubik’s cube of a movie. In many ways, it’s a throwback to the dystopian, you-can’t-trust-anyone era of cinema that immediately followed Watergate and the Vietnam War. This evocation of that vital era of filmmaking continues through its spare production design and often disorienting camera angles and lens choices. But Schroeder’s film is not a pastiche of potential influences and tropes. With its complex structure, labyrinthine plotlines, and turn-on-a-dime performances, it is unlike any other film you’re likely to see anytime soon.

After collaborator Stechschulte, Schroeder is aided and abetted most recognizably by his stellar cast. With a scruffy beard and unfortunate haircut—miles away from Pete Campbell’s smug unctuousness—Kartheiser is fragile and distant, a psyche cast adrift. Kartheiser’s eyes reflect a man truly lost. Chelsea Lopez shines in the role of Cyndi; the young, unsophisticated woman played as a pawn by her husband Art in ways she—and we, the audience—can never suspect. Lopez’s fresh face and performance become one of “Ultrasound’s” best assets. In contrast, Bob Stephenson is a visage you’ll instantly recognize as a classic “it’s that guy” face. He’s perfect as Art, the everyman who embodies “every man” almost literally. Tunde Adebimpe gives his role as Dr. Connors a charming and effusively earnest quality that is both quirky and unexpectedly devious. But the real standout is Breeda Wool as Shannon, the researcher whose dedication and earnest optimism are crushed by the “Ultrasound’s” revelations. It’s a splendid performance, and you can’t keep your eyes off the actor when she’s onscreen.

Stechschulte’s story never ceases to turn the tables on the characters and audience. But “Ultrasound” uses many tricks to ensure we never feel 100% at ease. Working with cinematographer Mathew Rudenberg, editor Brock Bodell, and production designer Alexis Rose, Rob Schroder has given “Ultrasound” a constant “uncanny valley” ambiance that underpins the picture's entirety. What may have been the result of budgetary considerations, the film’s retro technology and spare set design are brilliant in creating a milieu both familiar and full of artifice. Schroeder’s locations, use of wide-angle lenses and bizarre camera positions, and brilliant blink-and-you’ll-miss-them sleight of hand maneuvers achieve a similar audience dissociation to the work of David Cronenberg. That director’s famed body horror elements often overshadow the truth that his films are more about decaying psyches and fragmented perceptions of reality.

If “Ultrasound” can be faulted for anything, the complex story structure and its many machinations sometimes seem too ambitious. And at times, some of them seem to begin to verge on the extraneous. But the film’s final shot, with its terrifying implications, render so much of that critique moot.

For those who enjoy complex, challenging cinema that may not readily provide all the answers and isn’t afraid to leave you thinking, “Ultrasound” is not a perfect picture, but it is a highly original one. With commanding performances, a stunning visual sense, and uncompromising thematic concepts and emotional arcs, “Ultrasound” is powerhouse filmmaking in so many ways.

This devil of a reviewer gives “Ultrasound” 4 out of 5 imps.