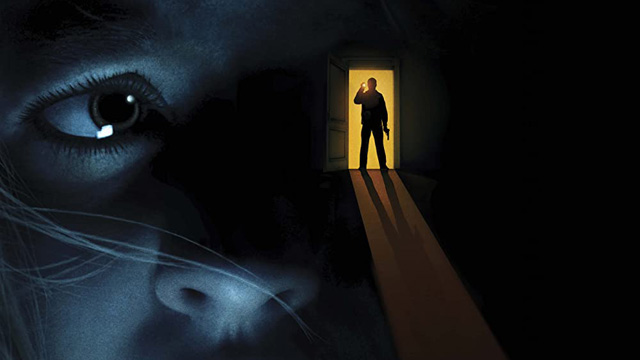 Diablo Joe Reviews See For Me

"See For Me"
review by Diablo Joe 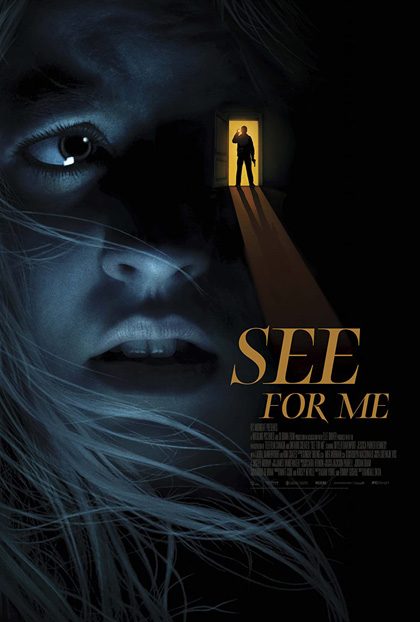 Trap a blind person in a house with a group of burglars. From “Wait Until Dark” to “Don’t Breathe,” it often comes down to the twists filmmakers can pull off on the basic riff as to whether or not these flicks stand out from one another. Streaming on Shudder, “See For Me” tries the tack of putting its protagonist in a setting less familiar to her than to her opponents and making her reliant on a phone app for help. And while this twist isn’t enough to recommend the film, “See For Me” brings some additional assets that tip the scales more in its favor.

Sophie is a house/pet-sitter for hire. Angry that degenerative disease has robbed her of a once-promising skiing career, Sophie is bitter, stubborn, and more than a bit entitled-feeling. Unafraid to use her disability as a tool and excuse when she wants, she makes side money stealing select items from the homes she watches. Her defense? They’re rich, and who would want to accuse the poor blind girl of stealing? But Sophie discovers her latest job has pickin’s of far higher value than she’s aware of when a team of home invaders descends on the remote mansion in the middle of the night. Realizing she is in a situation far out of her league, she turns to an app called See For Me—and the Army vet working the service that evening—hoping just to make it through the night alive.

There’s a lot about “See For Me” that, on paper at least, may seem a bit hackneyed and sometimes ridiculous. The script, by Adam Yorke and Tommy Gushue, doesn’t particularly break any new ground, thriller-wise, with the exceptions noted above. It sometimes stretches credulity with stuff like the movie’s homeowner so quickly turning over a multi-million-dollar mansion to an obstinate blind woman who refuses even a perfunctory tour of the place, no matter how much Sophie guilt-shames her. But it succeeds in smaller, more interesting details.

Once we get past “See For Me’s” otherwise rote-premise basics, the York and Gushue can tell a story with distinct, intrinsically drawn characters and crisp, believable dialogue. The writers aren’t afraid to make Sophie more than a bit of a jerk with a massive chip on her shoulder. She’s proud but also willing to use her blindness as a tool when she wants. Her hubris drives her to make several foolish moves throughout the film, but they are actions made plausible by her arrogance. Less a victim of her disability than her own foibles, she can also be smart, resourceful, and clever. Sophie is a great, well-realized character who just happens to be blind.

And in that role, the film is blessed by the presence of Skyler Davenport. Unlike prior peers Audrey Hepburn or Stephen Lang, Davenport is actually visually impaired. Much ado is made correctly about representation in film, and Davenport’s performance shows us why this is such an important topic with the ability to add so much to a picture. Their strong acting is further underpinned by the level of veracity that they bring to the role of Sophie. Already a successful voice actor, this is their first feature film live part. Charismatic and talented, they will be a welcome face to look for in upcoming movies.

The rest of the cast is also quite good. As Kelly, the Sophie’s See For Me app aide, Jessica Parker Kennedy makes the most of a part that comes with its own limitations. Though essentially a distant presence over a phone, she gives the character her all. George Tchortov, Pascal Langdale, and Joe Pingue are enjoyable and believable as our trio of housebreakers, as is Emily Piggford, playing a police deputy drawn into the evening’s mayhem. Always a welcome addition to any role, Kim Coates, “Sons of Anarchy’s” mercurial and complex Tig, brings his piercing blue eyes and satyr-like features to the vile, serpentine Rico.

Even if “See For Me’ had not so successfully reached past its well-tread premise, director Randall Okita would have at least given audiences a film that would have thrilled. Okita shows a deft hand at pacing and command of tension and action. His shots are always visually exciting, and his use of all his cinematic tools—lighting, sound, music, and editing—show confidence, skill, and maturity. He knows how to make a movie and keep an audience on the edge of its collective seat.

Reading a summary of its premise, thinking they’d seen it all before, some potential viewers might pass “See For Me” by. They wouldn’t be completely wrong, but there’s so much else that makes the film worth the while. There’s a lot of talent and promise on display here that film fans will enjoy. It will be interesting to see what Okita directs next and what York and Gushue might produce, given a fresher premise. Indeed, if nothing else, “See For Me” marks a fine debut for Skyler Davenport.

This devil of a reviewer gives “See For Me” 3 out of 5 imps.